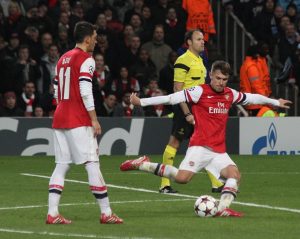 At the time of his appointment Mesut Ozil and Aaron Ramsey were the two best players at Arsenal and it was not surprising to see that Arsenal wanted a manager who could develop a team around them. We all thought Unai Emery was that man. We were told that he is that man both by the club and the man himself. But fast forward to now and one has already left the club while the other has been pushed on the brinks. If this is not the total failure of the said appointment then I don’t know what is.

Unai Emery has not been able to use the best out of Ozil and neither did he use Ramsey properly. As a club I don’t know in what direction we are going. If you appoint a manager to implement a Plan A than you just don’t stick with the manager and start implementing his own plan B which is shit anyway and in the process start selling your best players at the club because your manager values donkey workhorse players over technical players capable of standing among the best and be the best.

I personally feel the issue is neither Ozil nor Emery but rather the board that is backing Emery despite his failure to implement a system and style worthy of Arsenal Football Club. And no, just playing youth players doesn’t cut it.

As for Ozil, forget about him. Unai Emery has not been able to get the best out of any playmaker at Arsenal. Mkhi struggled, Iwobi sold, Cazorla and Wilshere found not good enough without hitting a ball under Emery and Jeff also sold. The only playmaker(Ceballos is not one and if you think that he is than what’s the difference between you and Emery?) left at the club apart from Ozil is maybe ESR and even he has found himself either playing out of position or getting sidetracked for players more capable to play out wide or putting in a shift.

Under Emery PSG signed Julian Draxler. If you just care to look back on his journey under the Spaniard you will find many interesting story path much similar to his German counterpart at Arsenal. He is a playmaker capable of playing as a No. 10 and out wide. But Emery struggled to fit him in his team of 3 DM’s and only sparingly played a 4-2-3-1 formation with Draxler as 10 even in farmers league. The result, his PSG side was so negatively put on pitch against Barca that they surrendered a lead than no one in the modern history did before.

People talk a lot about his Europa League successes at Sevilla but fail to mention that under Emery Sevilla never ever made it past the group stages of Champions League when they qualified. They also fail to mention his Sevilla’s side performances in the league. (Of all La Liga clubs, conceded the most shots on goal in 2015-16  season under Emery according to this source)

I have always found that managers are best described by their first instinct. How they react to a certain situation. In what way they perceive it and think about it. While Arsene first instinct was always to score and kill the game, Emery first instinct has always been found to be negative. He is a pessimist thinker on pitch who always anticipates that his team is the worst and that there are minefields all over the pitch. Give any attacking pure No. 10 to Emery and he will fail to get the best out of him because Unai Emery is not the coach to play attacking football. He is the coach that you get to try to save you from relegation.

The issue with Ozil is Unai Emery’s use of our midfield. If Unai Emery can make his midfield become a source of springing attacks and creating chances with the idea to dominate, Ozil will again find himself in the team and playing like a player that we remember him for. But if Emery continues to use his midfield as a defensive shield and a focal point to provide good passes for his fullbacks/wingbacks then really there is not much hope.

Unai Emery is an appointment made wrong. If we back the Board and Emery, we might as well say Good Bye to classy Arsenal and the Arsenal way. Ozil is just a metaphor, the real issue is something that no one is talking right now.