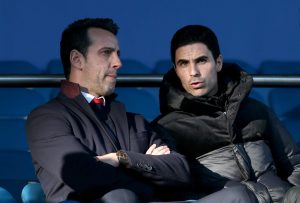 Edu and Arteta make me weep for Arsenal

There was a time, as recent as last year, when Arsenal went into a season with the minimum expectation to qualify for Europe. Up to three years ago, the mantra in mainstream and social media and among a large section of the fanbase was ‘anybody but Wenger would have the existing squad challenge for the title.’ By that time the owners had bowed to the noise of the crowd and canned the old Geezer despite a record-breaking home season in 2017-18 of 15-Wins, 2-Losses, 2-Draws for 47 points or missing Champions League by one point the prior year. Arsenal in the previous 20 years had had always made the Champions League winning three PL titles in the process including an Invincible Year. For a generation Arsenal entered every season realistically thinking it was one of the title contenders and a shoe-in for Europe.

This is what makes Edu’s recent interview with Sky Sports so historic. Essentially the Technical Director, the highest football man in the club, to whom Arteta the manager reports, simply waved the white flag for 21-22 season.

Many have already poured over and parsed this this statement to death. What I found most interesting is how the agenda merchants who less than three months ago blithely assured us that ‘Arsenal should easily make top-4 without distractions of Europe’ have done a 180 and are now content not even making top-10.

Take Arseblog ,for example, who in reaction to that white flag moment noted:

“Whatever you think of the work Edu has been in charge of, it’s a positive that there is more transparency, more communication, and also we now know from the horse’s mouth, so to speak, what the club wants to do to develop this team. When we see them play, when we see team line-ups/selections etc, our reactions and opinions can be based off that framework, so that clarity is useful.”

Have you gotten up from the floor yet? This really big Arsenal blogger just told us Edu is doing a great job lowering expectations and making us comfortable with being a mid-table club whose ambition is to come 10th or less. Furthermore, we must trust the team of Arteta and Edu who took us to 8th because they will develop the team. This is the same duo that got rid of Arsenal’s best player Ozil and at the same time sidelining both Guendouzi and Saliba who, when they were signed, were regarded as stars of the future.

Like all those big accounts who paved the way for Arsenal’s surrender to mediocrity, Le-Grove is just as happy with the new direction of the club.

“Listen, say what you want about all the other bullshit, now the window is closed, we delivered on a new vision.”

Note the possessive “we”. Make no mistake about it, Le-Grove is fully in bed with the club’s direction. He was giving his full support to Vinai’s recent statement to the staff which Edu simply echoed:

“Our approach for this window was framed by fully recognising that we are not where we want to be on the pitch — finishing eighth last season, with no European football for the first time in many years,”

“Whilst we would love to jump from where we are to where we want to be in an instant, we need to be realistic that the gap is too large to do that. As such, our activity this window has been focused on youth.

“Our strategy is to fill our squad with some of Europe’s most exciting young talent, with players from both our academy and further afield, that can grow and develop together under Mikel to take us where we want to get to.

“Whilst this will not be overnight, we can make positive progress, and it gives us the best route to future success in a sustainable way.”

There are many Gooners who would love to believe that Edu and Vinai are doing what is in the best interest of the club and that they truly care about building the “foundation,” according to Edu:

In a one-year period, we signed 10 players and seven of the 10 are under 23. We renewed seven players in this period as well, just in the first team. Five of the seven are under 23 as well.

But these are the same guys who shipped out Guendouzi and Saliba, sent Willock and AMN on loan and eventually selling Joe to Newcastle and were desperate to sell the latter until it was apparent they needed cover at Right-Back. Imagine young U-23 homegrown, academy players sold off or loaned and Edu has the audacity to speak of building foundation.

Trust Le-Grove who is now in the tank with the new regime, to tell us what is really going on:

It is austerity at Arsenal, boys and girls, no matter how Edu, Arseblog Le-Grove and the various other agenda-merchants want to spin it. The famous cash reserves are gone, European football is gone and its belt-tightening time. As anybody who has lived through austerity knows; without wise, honest, skillful leadership austerity becomes a one-way street as the body shrinks to the bone. Coincidentally, as in the wider society, a small parasitic minority, the agents, are getting fat at the club’s expense, wheeling and dealing in the transfer market giving fans the appearance of progress.

No wonder, I weep for the future of my football club.