In Arteta’s first game in charge, Arsenal did something they could only achieve twice under Emery’s reign. That was to register 17 or more shots on goal in a league game.

According to the stats from the Premier League website, Arsenal dominated in almost every category except the most critical, scoring more goals than the opposition. 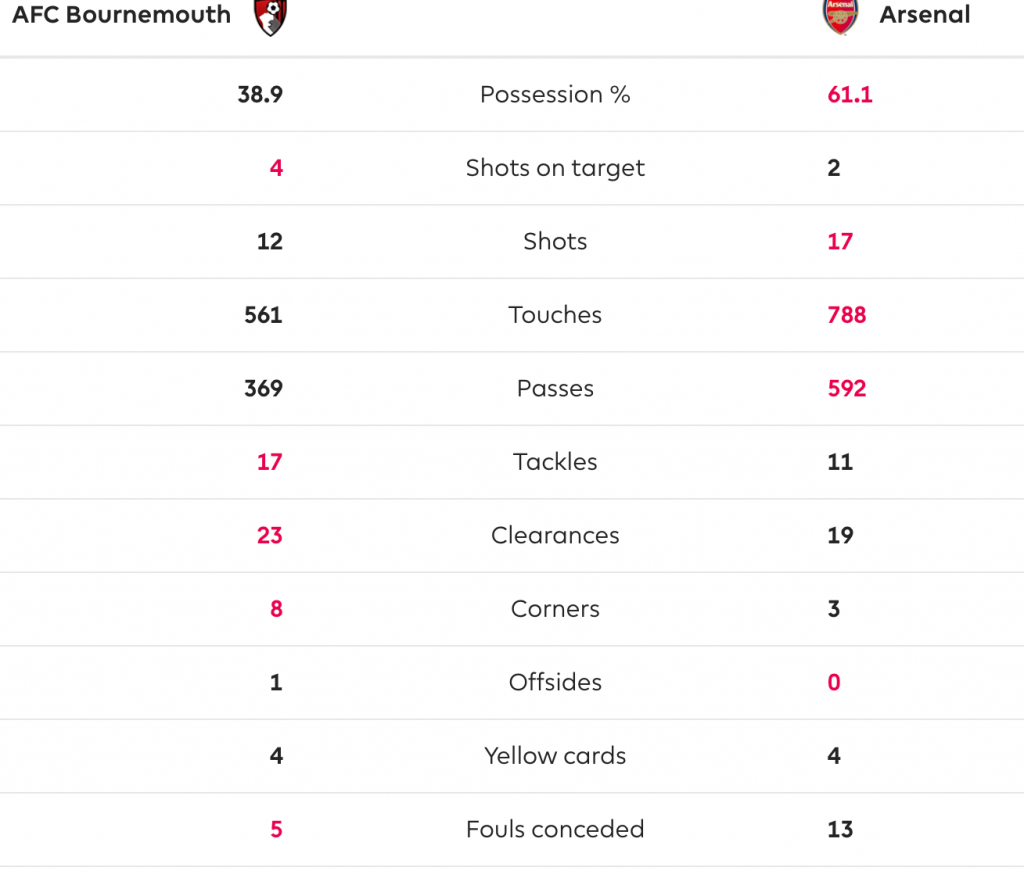 Watching Arsenal felt like going 18 months back in time to Arsene Wenger’s final season in charge. That was when Arsenal time and time again would produce a performance dominating enough to win not one, but two games, only to somehow walk away with a point at best, especially away from home.

The same thing happened on Boxing Day, where Ozil and Xhaka dominated Bournemouth midfield in a way that we have not seen Arsenal do for a while and definitely not this season. The confidence and swagger with which we moved the ball around, especially in midfield, was all reminiscent of the Frenchman’s style.

Arteta has however added the awareness and the eagerness to hunt and win the ball back after losing it in midfield.

But despite of all the domination and the 4 clear cut chances that Ozil alone delivered on plate for his strikers, we failed to grab them as we saw Bournemouth get away with a point in a game which we really should have had won by the half time.

Before kick-off  a lot was made of Mikel Arteta and how he will approach his first game in charge. The word change is often cried out loud when a new manager walks in but what Arteta did was to just remind Arsenal about the importance of playing the basics of football and grinding it into their system.

Arteta wanted to keep it simple. Know your role, be eager to get on the ball and always try to find the right pass to either a free man or in a free space for someone to attack.

He brought back Ozil and Lacazette into the lineup while persisting with Nelson over Pepe, something that can only be described as a show of faith in the youngster who is yet to fully grab the opportunity this season.

Though the midfield partnership of Torreira and Xhaka remained it was anything but the same as we saw a change of roles between the two. Torreira was deployed the deepest and tasked with setting and controlling the tempo of the game with Xhaka given a free-er attacking role of a false No. 8. This saw him play close to Ozil but not advance as much forward as Ramsey used to do.

This small tweak gave Arsenal a lot of advantage as Torreira hold his role effectively and Xhaka was able to get in positions in which he was able to not only connect with Ozil but also find him in those little pockets of spaces where he becomes so dangerous. Probably the best use of him ever since the Frenchman’s departure.

As a result Ozil thrived and Bournemouth had no answers. On any other day Ozil would have got a hat trick of assists but he got none.

First chance came to Lacazette who after finding himself one on one with keeper lost the ball in his feet after Arsenal had produced a stunning two pass counter.

Then, the ball came at the mercy of Saka who from 10 yards out was unable to find any of the 4 Arsenal players waiting for the ball in the box. Moments later, Ozil combined with Nelson to give another chance for Lacazette and high above the goal it went.

Lacazette then went close again after poaching the ball off the defender but failed to convert. Nelson then carved a chance for his own only to see his and then Auba’s shot blocked with the goal in sight.

Three (3) more chances followed for Lacazette and Aubameyang but none were to find the back of the net.

On the other hand, Bournemouth focused their attacks on the Arsenal goal down their right-hand side. They were clearly aware Arsenal had a striker and a winger defending that flank. Given a chance they pounced. Arsenal after trying to play from the back lost the possession and Stacey found space in box to attack and provide a cutback for Gosling to put the home side in front and leave Arsenal in a familiar place.

This was the 10th time this season that the Gunners conceded the first goal of the game. But Arsenal did not lose confidence and kept doing the right things and would have felt unlucky to go behind at half time. They had done everything right apart from the finishing to much frustration.

That pattern continued in the second half with Aubameyang in the firing line this time. But soon, Arsenal found a moment. It was created brilliantly by a Xhaka pass between the lines that opened up space for Aubameyang to attack and attack he did. Initially he played the ball behind Lacazette and it felt like the chance had gone.But the Frenchman was able to control the ball enough to play Ozil whose lay off for Nelson saw the latter’s shot deflected off in the path of Aubameyang who slotted it home.

Arsenal was gaining in confidence but that confidence still did not improve our finishing as we saw Lacazette once again squander a one-on-one chance after being put in goal by one the most imaginative passes of the game by David Luiz.

With 15 minutes remaining Arteta decided to roll the dice by substituting Ozil off for Willock. The later did provide more energy and legs but offensively Arsenal went dead. From that moment our best chance seemed to be from counters. Even then we produced one, only to see Willock timidly shoot it straight in keepers gloves.

The game ended in frustration for Arsenal but not in the way we got so accustomed under the former Spaniard. It was not due to lack of style, identity and bizarre tactics. It was because we failed to get the 3 points we deserved after producing a display of total football with complete midfield domination and playing football “The Arsenal Way”.

The process on the pitch was as crystal clear as the ideas of Mikel Arteta in his interviews and press conferences. If we can see such a vast improvement in style and mentality in a week then I am excited for what the future holds. Arteta has made us dream again and given us hope. Seems after 18 months we have finally got Arsene Wenger’s successor!