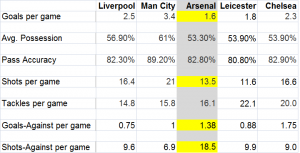 Eight games into the Premier League season and there is much debate among Arsenal fans about results versus performance. Despite being outshot by struggling teams such as Newcastle, Burnley, Watford and Aston Villa, Arsenal has still come away with points in the form of Win-4, Draw-3 and Loss-1. How does performance compare with other teams in the top-5?

The above table is an indicator but has to be discounted due to the small sample size. None of the listed teams have met an equivalent range of competitors for us to draw definite conclusions. But dark clouds usually portend a storm. These clouds are represented by three highlighted data points.

Despite the sustained brilliance of Aubameyang, who was last season’s joint golden boot winner, Arsenal has the lowest rate of goal-scoring among the current top-five.  While it is expected and predictable to be less productive than last year’s league winner and UEFA champions, Man City and Liverpool respectively, the gap is a chasm. City is scoring at twice the rate and Liverpool is 50% better. Of even greater significance is the offensive superiority of the youthful Chelsea team, with an arguable inferior squad and a far less experienced coach but are banging-in goals at nearly twice the rate of Arsenal. Kids are notoriously unpredictable which can either be a positive or negative for Arsenal.

Of the top-5 Arsenal are second only to Chelsea in conceding goals. Liverpool is leading the pack with a miserly 0.75 goals per game. The Gunners are conceding at nearly twice the rate of Liverpool and 40% higher than Man City. We are seeing the   same gulf in goals-against between Arsenal and the top-2 as we saw in the goal-scoring. Very concerning from an Arsenal point of view is that top-4 rivals Leicester City are conceding nearly 40% less goals. Unlike Frank Lampard at Chelsea, Leicester’s Brendan Rodgers is an experienced coach, who took Liverpool very close to the title six years ago. If they maintain a similar rate of goals-for and goals-against, they will inevitably surpass Arsenal.

There was legitimately huge alarm in the Arsenal fanbase, four weeks ago, when the team was outshot 31 to 7 by Watford, currently the worst team in the league. Evidence that the midfield and defense is vulnerable to willing attackers was papered over by victory over lowly Newcastle and Burnley, both of whom out-fired Arsenal 9 v 8 and 18 v 15 respectively. Losing to Liverpool who rained in 29 shots versus 9, and drawing with Spurs, 26 shots versus 13, was generally regarded as par for the course. But Watford was clear sign of a systemic weakness. Since then the club has tightened up and Bournemouth only got 10 shots off. Note however that nine of them were in the second-half when they desperately sought an equalizer, suggesting that Arsenal is still vulnerable. Allowing 18.5 shots per game may be a statistical outlier at this point in the season but it is significant that none of our top-5 rivals are even into double figures. It suggests some something is systemically amiss which if not corrected will doom Arsenal’s top-4 prospects.

I must remind football fans that, as in politics and religion, a recitation of data rarely changes the minds of people who cling stubbornly to a set of ideas. People accept facts that comport with their beliefs and ignore, even reject, anything to the contrary.

When it comes to Arsenal, there seems to be a split among fans about how the club should be managed and play its football. On one hand there are those who believe that the old regime had outlived the times and was holding back the club. They therefore hold fast to the idea that Unai Emery is transitioning to a more effective way of playing as justified by the results and performance is of minor consequence.  On the other hand are fans who bemoan the way Arsenal is being outplayed and outshot by so-called ”small” clubs and hold strongly to the view that performance will inevitably impact the results. As far as the latter fans are concerned, after nearly 1.5 years and £200 million in transfers, Unai Emery has had sufficient time and personnel to impose his way of playing, certainly more than Frank Lampard and Brendan Rodgers.

Apparently only league position will settle the issue for some fans. Same thing happened last year when Arsenal was 3rd in the league and on a 22 game unbeaten run. Most fans exulted despite poor performances and a dependence on Aubameyang’s fantastic but unsustainable rate of goal-scoring. Once results turned against the club, key players from the previous regime such as Ozil and Ramsey, who had been exiled, were suddenly recalled. But the rot had already set in. An end of season collapse, marked by the unfathomable decision to bring on 3 defensive minded substitutes when trying to get at least a point from a key match versus Brighton at home when trailing 1:nil, was enough to seal Arsenal’s failure to achieve top-4. This time around there is no Ramsey and most likely no Ozil, based on current efforts to demonize and separate him from the football club.

Despite data and experience that poor football leads to poor results some seem to think it will be better this time around. The underlying data may not be conclusive but at best they suggest Arsenal is standing at the brink of success or failure.