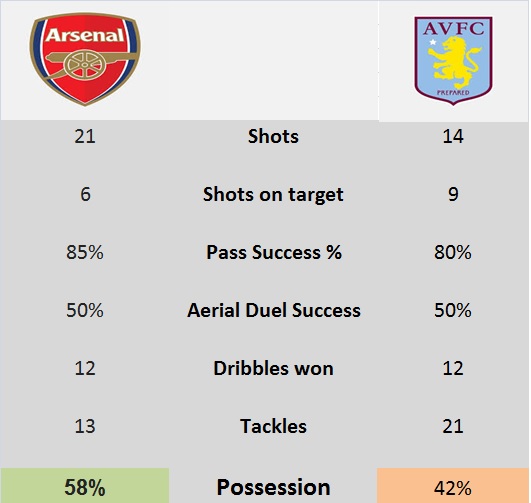 Arsenal triumphed over Aston Villa 3-2 after falling behind twice in the 20th and 60th minute, first to McGinn who stered a cross into the back of the net and then a neat near post flick by Wesley from Grealish put them up 1-2. But the Gunners roared back. Our first goal was in the 59th minute via a penalty scored by Pepe after Guendouzi’s excellent dribble into the box and the equalizer at the 81st when Chambers neatly stabbed one home after the ball ping-ponged in the box. The ultimate dagger was struck in the 84th by, who else but Aubameyang, our goal scoring savior since last year, who struck a delicious free kick low and hard to Tom Heaton’s left.

The post game jubilation and relief among us fans cannot paper over the fact that Arsenal struggle mightily to overcome the newly promoted side especially during the first half. Although Arsenal enjoyed 70% possession during that period, Orbinho on Twitter revealed that the Villans had 5 shots on Target compared to Arsenal’s 2. This is a telling stat that we at Uncensored have been featuring explaining why Arsenal have difficulty overcoming traditional mid and lower-table teams like Newcastle, Burnley and Watford. Compounding the difficulty for the Gunners was a 2nd yellow card for Ainsley Maitland-Niles on the 40th minute which on review was a horrible decision by Jon Moss, adding to his resume of dodgy decisions against our players.

Villa go into their shell

Fortunately for the Gunners whenever Villa had an advantage they went into their shell and dropped deep to defend their goal leaving the freedom of the Emirates to Arsenal as the game wore on. Obviously they had no confidence in their ability to hold the ball, string passes together and make the pitch as big as possible for the undermanned Gunners. The Arsenal team may be limited in creativity and creating chances but they are far more talented than Villa and it showed. Playing 2 and 3 at the back they constantly pushed 6 and 7 players in attack and reaped their reward. The stats don’t lie.

Still disquieting is at the end of the day the Villans had more Shots on Target. But Hey Ho, it is the result that counts, innit?

After that fantastic effort by the team and the resulting victory everyone blew a huge sigh of relief, none more so than Unai Emery.  It could have been 180 degrees different. The mood on Twitter when we fell behind was incendiary. This upcoming week could have been very difficult, if not impossible to overcome. One wonders if after this victory he remains just as secure in his position as prior. Meanwhile in 8 days we have the struggling Manchester United. That too is another enormous challenge for him and this team based on current form.