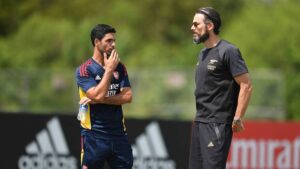 Arteta and Josh in America

Many Gooners think beating Chelsea 4-0 last Saturday in a pre-season friendly was significant and predictive of our future. Yes, victory was good and a positive sign. Gabriel Jesus and Saka scoring goals was even better. But let’s not get carried away. For heaven’s sake we are the 2nd highest winners of the Community Shield, the last time in 2020, beating Liverpool. Yet we have been out of the top-4 for six straight years in contrast to Liverpool’s constant battling for top-2, and who even won the Champion League in 2019.

To me of far more significance was Arteta’s comments about the Kroenkes just prior to the match. According to the Evening Standard, Arteta was gushing in his praise:

“They were here for two days, we had a lot time to sit down in a really relaxed way: talk about football, the sport in general.

“The vision they have, the commitment and level of understanding of the sport in general is fascinating.

“I can tell you: I have never seen ownership at that level so committed, close and engaged to bring this club where we want.’

“I think before, we could have a perception of what they were,’ Arteta says.

“I think it’s completely changed, I think that’s been shown with facts and acts. Their presence here as well. Something is to be here and something is to be here the way they were. I guarantee you: they are fully committed, engaged and really looking forward to taking this club to the top.”

With Arteta feting the Kroenkes with such generous praise, is it any wonder that Arteta has already received €132.06m in spending on transfers half-way through the window?

In fact it seems to me, Arteta is implying the Kroenkes will be spending more on transfers this window than they have already done. ‘I guarantee you: they are fully committed, engaged and really looking forward to taking this club to the top.’

Stan and Josh must be thinking they can conquer the English Premier League, given that in this calendar year, two of their major franchises, the Los Angeles Rams and the Colorado Rams have become champions in their respective professional sports, American football and ice-hockey. It must be tempting to believe they can transfer the template so successful in America to England, even though the EPL is a league system without the many escape hatches (e.g. play-offs and the draft) which poor teams in the NFL and NHL can benefit.

Arteta has the leverage

History teaches Arteta has the leverage to get the Kroenkes to spend. It was exactly two years ago when the club was flailing around, 8th place in the League, that banners were being flown over Villa Park stating “Back Arteta. Kroenke Out.”

In the post match presser according to the Evening Standard, when asked about the banner at full-time, Arteta was adamant that he had the full backing of the club hierarchy, telling supporters to trust in his words on owner Stan Kroenke.

“No, no, with Kroenke and the board and the sporting director, I feel full backing with them,”

We finished 8th again the following season. but this didn’t discourage the Kroenkes from further spending. In May 2021 when we were flailing around Arteta was quoted as saying:

“Time is catching up right now.

“It’s a trend, it’s years now that this has been happening.

“If the distance and the margins with the rest becomes too big, then it’s almost impossible to do it.

“I think we are still on time and we have put some very strong pillars and foundations in the last few months to do what we have to do.

“The squad needs changing. There were already a lot of changes in December, something that has not been done in years, but it tells us where we were.

“Things have to change and the owners are going to back it up.”

When asked if that meant Arsenal would have a sizeable budget this summer, Arteta nodded.

Arteta was right. He ended up with a record €167.42m in transfers, the highest for any Premier League club and arguably the highest in Europe.

Given the trend over the past three years; €86.00m to €167.42m, I wouldn’t bet against the Kroenkes spending as much if not more money than last year.

Penny for your thoughts, dear readers.