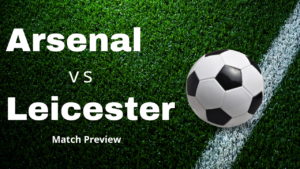 An opening day away win, solid to great debuts for new (and like a new) signings, and a clean sheet. What more could you ask for from the start of the new Premier League season? ManU’s loss and Liverpool’s draw were bonuses. Of course, not everything was as rosy pink as our beautiful new shirts. (take that, Sugar!)

While the result was great, and a few players, especially Gabriel Jesus and Saliba had brilliant performances, I feel like we were a bit lucky to get away with the lack of control and lack of chances created. If this were a one-off performance, then that’s a positive. Winning when not playing well is a great ability to have. But it goes back to all of Arteta’s tenure and if the new look Arsenal side can’t change that then it’s a bigger problem.

No goals, No targets

Of course, it’s only a problem if you have targets you need to hit (besides the goal) It’s now leading up to the 2nd game of the season and I don’t think the manager has said what our real goals for the season are.

Still, for now we take it game by game. And coming to our first home game of the season are the Leicester City foxes, led by Brendan Rodgers – a man no stranger to missing out on top 4 and on making a spectacle of himself for some faux documentary.

Leicester and Arsenal swapped places in the table last season, and then both opted for very different approaches in the transfer market. Arsenal are once again on their way to potentially being the top spenders in the world, while Leicester have spent nothing. I believe they are the only PL club to have done so. It’s an interesting approach if nothing else. Maybe they are waiting to sell Wesley Fofana, Saliba’s former teammate, for a record fee to Chelsea, and Tielemans to us for a not-so-record fee, before they do their business. I wonder if they know their season targets.

Arsenal will likely have their full squad available as ESR, Vieira and Tomiyasu have recovered from injuries. Saliba’s speed and solidity will be key against the likes of an aging but still dangerous Vardy, and Maddison. Our midfield will have to close theirs down to prevent long range shots and stop them stretching the game and leaving our defenders one-on-one. I wonder if Zinchenko will play in midfield to add some technical ability in there and free up Odegaard to contribute more further ahead. Versatility has been a buzzword this pre-season and it might be a chance to see it in action and keep Rodgers and the Leicester team guessing.

Up front Gabriel Jesus will remain the main man, and his ability can really cause havoc in the Leicester defense. But creativity remains an issue in the side, and one I’m hopeful Vieira can address in the longer term. No, not Patrick.

Speaking of which, it is the 30-year anniversary of the Premier League this weekend, and the Arsenal Invincibles have been mentioned by many a talking head in that regard. No less than our current manager picked them as his PL moment. Not sure he understands what a moment means but he does understand what people want to hear. But at least we can agree those are the standards to aspire to.

I’m often accused of being negative, and I suppose I am because I haven’t seen much to be enthused by, and I was never a fan of a hard sell. But we did play better in the last game than we have for a while. Yes, the issues remain, but we moved the ball much quicker, and played with more verticality. Something akin to Wenger’s vision of football. Saliba’s reading of the game made a lot of difference as well, and has led to many rewritings on what the ‘plan’ for him was. Such discussions are a quagmire though.

Arsenal meanwhile need to not get stuck in second gear for most of the match. Make sure they make the most of their period of superiority, which if we’re honest, should be long stretches, and hopefully we don’t concede first because I’m not sure how we’d deal with that. Leicester have a soft center and we need to go at them hard. Our first home game of the season, on a hot August day. The heat is on in more ways then one. Let’s hope we can keep our cool and come away with not just the 3 points, but with a good, comprehensive performance.

PS: We also have a Telegram channel:
https://t.me/uncensoredarsenal