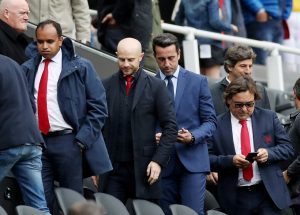 The dithering management hierarchy (L-R) of Vinai, Edu and Sanllehi

Thanks Shard Gooner. You were almost the first commentator online to helpfully identify this self confessed “Chameleon” style of Football last season for those of us fortunate enough not to have lost hours of our lives watching Emery’s Valencia, PSG, etc. attempt to play Football.

And as fans and followers of those clubs highlighted previously the simple fact is in football you cannot be a coward, sorry, I mean Chameleon.

The reason why you could make such a simple and accurate prediction in your match previews is because it’s exactly the same thing as we saw in Unai’s second match against Chelsea, or the final against Chelsea.

In both contests although his team were set up to play different “tactics” and “formations” he does the same thing. Every single time.

The Arsenal Holes droned on about Groundhog Day when they were seeing different things every week. They didn’t know what they were talking about.

Emery freaked or freaks out at halftime, everytime. He dropped or drops his pants and tried or tries to fix his anchor and yet every time the poor footballers on the football pitch only resemble poor galley slaves sinking down into the depths along with Unai’s ship.

Raul Is the biggest Idiot

But as we have discussed here since last season, the biggest idiot at the club is the person who appointed Emery. And it looks like it was always their plan to bring in Jose. Sabotage? Is that too gentle a word to describe Raul’s work at the Arsenal? Who can defend this man’s record at the club?

Which is why the “I Really Like Raul” fanboys have been talking about Emery being outfoxed by Ozil’s PR and not the head of Football Relations.

The leaks from the dressing room about Emery this week probably came from the man who hired him, who has always had Jose lined up to be his main man. Raul, who destroyed the reputation of Barcelona in the game, what is he doing to the Arsenal?

When will the big Arsenal online accounts point out the bleeding obvious. That Daddy Raul is bleeding the club?

This comment on the blog by  FinsburyP two weeks ago remains as relevant as ever.