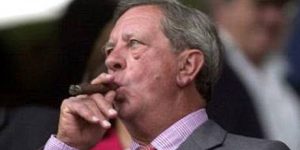 Dusting off another enemy in Peter Hill-Wood style.

So Raul Sanllehi was asked to leave, sacked, given his walking papers, whatever. Choose your euphemism.

But there is no sugar-coating what happened. This is how senior executives are fired. Not in the brutal, matter of fact manner in which Sanllehi and Vinai announced 55 redundancies nearly two weeks ago. It is usually polite and civil without any public bloodletting.  After all corporate executives have knowledge of deep company secrets. It is a tacit quid pro quo; “If you keep your mouth shut, so will we.”

The Kroenkes know the game and play it well, very well. Their statement was was plain and straightforward in contrast to that long, virtue-signalling 500 word essay “From our Club” to announce the prior firings. The first sentence made it crystal clear:

“We are announcing today that head of football Raul Sanllehi is leaving the club and Vinai Venkatesham, our current managing director, will lead us going forward.”

After that they proceed to big-up Vinai as the future leader. Then they allowed Raul some  final words. It may seem like platitudes but the following quotes have virtually barred him from any future claims of constructive dismissal.

“I am proud to have been part of its history and I thank Stan and Josh Kroenke for this opportunity. Working with Vinai, we have built a top team for the future. Mikel has made an extremely positive impact since his arrival and has formed a strong team with our technical director, Edu.”

Can you imagine having to kiss the ring of those who fired you from a very powerful, executive position at a top club in England? True to form Don Raul acted like a true mafiosi.

He must have really screwed the pooch to have the Kroenkes put the gun to his head. Rumors have been abound since Friday that the club was investigating massive irregularities related to the Pepe transfer. According to last Friday’s edition of ESPN.com

“Arsenal’s efforts to streamline and improve their operations has extended to an internal investigation into whether they overpaid for £72m club-record signing  Nicholas Pepe.”

I don’t think it is any coincidence that this investigation and discovery of, ahem, “irregularities” happened shortly after Tim Lewis, a corporate attorney and Arsenal fan, was named to the board of directors. While the Kroenkes are safe in the States working remotely, Tim would be in London with full access to all corporate documents and doing the due diligence that a board member and attorney must do. If Tim discovered the irregularities and did his legal and ethical duty to report it to the Kroenkes, I salute him.

But this is not the first irregularity that Don Raul has been involved. Long before he landed at Arsenal, in October 2017 he was asked to leave Barcelona after his role in the scandalous Neymar transfer which cost the Catalans a transfer ban.

Barca has always been associated with dodgy transfer dealings, a fact that has been covered up because they won major trophies, have arguably the best footballer in the world on their books and always maintained a massive PR operation at home and abroad (UNICEF on their shirt shows how much they care for children doesn’t it).

The Don always denied and down played his role in the various skullduggery  and palm-greasing that went down with the Neymar deal. But according to ESPN.com:

“In his role as director of football, Sanllehi has been a key player in South America and was instrumental in the deal that saw Neymar join Barca in 2013.”

Sandro Rossell, then President, had to take responsibility for the debacle and was forced to step down from that role or else UEFA would have inflicted greater pain on the club. New president Maria Bartomeu had to clean house and thus Sanllehi was let go.

That was how we inherited the The Don and his corrupt crooked way of managing transfers. Thank heavens he is gone.

How Karmaesque for Sanllehi’s demise to have happened within two days after Barcelona was humiliated 8-2 by Bayern in their Champions League semi-final game exposing the “rottenness” at the top and the incompetent way the club has been managed. Old, slow overpaid players exposed and having no resale value, many of them signed under Sanllehi’s watch.

All honest and true gooners should be rejoicing. At least a football man, Mikel Arteta, and Edu will be calling the shots when it comes to player recruitment and transfers. Not a dodgy character from Barcelona with a list of transfer agents in his Rolodex.

My friend Blackburn George and I will go into more detail in our next podcast. Please listen and subscribe.