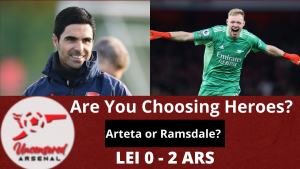 Arsenal defeated a very good Leicester team 2-nil on Saturday. Ramsdale deserves high praise for making 8 saves including at least two worldies. Arteta gets credit for putting out a team that was high energy, high press for the first 18 minutes. But the record shows for the next 70 plus minutes Arsenal were outplayed in almost all categories; out-passed, outshot and out-hustled. In a word, battered.

But hardly anyone in both mainstream and social media seem concerned about the underlying statistic. To the contrary the dominant narrative is either about Arteta’s Arsenal going nine games unbeaten, as if Emery didn’t go 22 games unbeaten just under 2 years ago or to gush uncritically about how brilliant Ramsdale was, without questioning why our keeper had to be so busy despite having new and improved defenders in front of him.

Seemingly me and Blackburn George are the only podcasters-YouTubers willing to challenge the prevailing narrative and to express our concern that performances like those at Leicester are unsustainable. Two years ago we were among a lonely few to go on record and proclaim that Emery’s 22-game unbeaten run would end in tears. By December 2019 we were proven right after Emery had taken us down to 14th and was summarily run out of town. We may be wrong this time but I, for one, doubt it. As George said, unlike Emery, Arteta has a much younger team with a much higher ceiling. But if his team continues to perform in the current manner, sooner or later our luck will run out.

Below is more of our opinions in our latest YouTube VIDEO. As always we invite you to support our uncensored, unfiltered point of view without the hype and false narratives that now dominate mainstream and social media. We are confident in our point of view because time after time we have been proven right.