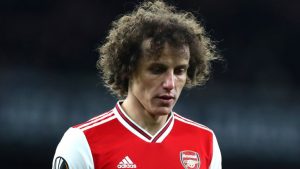 ARSLEI: When David Luis left the field it ended Arsenal’s “creativity” but where is….?

My headline is no mistake. It is not a joke. I will explain the mystery later down.

There is nothing amusing to a genuine Arsenal fan when we lose a football match, although the Wenger-Out brigade made it a point of duty to revel in every defeat in the old boss’ latter years as they figured every adverse result would bring closer the end of his reign.

But I don’t count them as genuine fans.

Too many of these so-called gooners were using negativity and pouring salt in the wound after every defeat or draw as a way of growing their popularity on social media (“misery loves company”) which they have now leveraged into earning money from online advertising and their Patreon accounts. Go check the biggest Arsenal bloggers, podcasters and YouTubers to see how they are milking thousands of gooners who stupidly believe these accounts care about the traditional values and principles of the club.

Arsenal was always the pioneer in playing the most progressive brand of football in the English top flight; from the era of Herbert Chapman to Arsene Wenger. Having helped in hounding Wenger out of the club these accounts are now willfully blind and in some cases cheerleading Mikel Arteta for his brand of regimented, defensive-minded football. Worse of all they endorse Arteta’s treacherous role, on behalf of the Kroenkes, in outrightly banning and excluding Mesut Ozil from the Arsenal Europa League and EPL claiming it is all his personal decision for “footballing reasons.”

In response to such a clear a clear falsehood, given that the Kroenkes, starting with Emery, have sought to ease Ozil out of the squad for over a year, did most of these big accounts raise a finger in protest? Did they come on Twitter and offer their support to @AFC_Mac_2’s petition demanding that Ozil be reinstated in the squad?

Of course they did fack all. Instead all they offer their followers, readers, listeners and viewer are platitudes along the lines of “trust the process”. Give Arteta time to fix the defense and attacking football will follow. It will be a never-ending wait I can promise you.

Wheels already coming off the bus

At home to Leicester and the wheels are already coming off the deceptively, shiny new bus that Mikel Arteta has been driving since he took over the club last December. Nobody can deny he righted the old vehicle and gave it a new paint job after the disastrous reign of Emery. We were already 14th in the league and heading downward so the bar was already woefully low. Initially he focused on a better defending and gave a chance to all the Emery rejects and in his first 10 games suffered only one defeat as the club climbed its way up the table.

But after Project Restart, Arteta clearly abandoned any pretensions of attacking football as Ozil began to be sidelined with the manager refusing to give straight answers when asked why by journos at his pressers. Instead we saw a return to the dreaded low block of Emery, emphasis on attacking down the flanks and long balls to Auba, cutting-in from the left as the main source of goals. It served Arteta well in the FA cup run beating the likes of Liverpool and eventually Chelsea in the finals. But his defense-first, Emeryesque tactics offered little threat to mid and lower level PL teams like Aston Villa and and Brighton who took all three points in the crucial run-in. As a result an outside chance of top-4 petered out to a struggle for 6th.

Some of us warned that nothing has really changed with this new season (check the Positively Uncensored Arsenal podcasts).  Despite victories over Fulham, Sheffield and West Ham, the lack of creativity was glaring as well as the over-dependence on Auba for goals. Blackburn George (@arseblagger) and yours truly warned repeatedly this dependence would come back to haunt us once Auba returned to the 15% mean strike rate of the very best strikers.

Brendan Rogers is no idiot. From his days at Liverpool and, prior to that, at Swansea, he is well known as a flexible tactician. Absent Vardy, Ndidi and Soyoncu, his best striker, defensive midfielder and central defender respectively, he initially decided to flood the middle with six midfielders with the aim of forcing Arsenal to play down the flanks but to deny Auba the ball and force him away from the penalty area. It was a risky strategy as David Luis managed 5 or 6 long crossfield passes in the 1st half, most of which eventually led to goalscoring chances. By half-time Arsenal had 11 goal-scoring attempts versus one to Leicester but critically Auba had only one shot. Mission accomplished.

By half-time it was crystal clear that Arsenal had run out of alternative ideas for breaking down Leicester. At the 43rd minute, according to Andy Townsend, the comments man on my feed “Arsenal need a little bit more magic, a bit more creative” Hang on there I thought, soon he will comment on the exclusion of Mesut Ozil. But naught.

The moment of truth

Second half began much as the first but with Leicester seemingly more confident in their tactics. Both sides traded punches until David Luis, who until then was Arsenal’s most dangerous player, flopped down on the pitch evidently done for the game. Then Ian Darke, the play-by-play man, lamenting Arsenal’s loss or lack of creativity burst out with this plea: “Where Is Cesc Fabregas when you need him?”

My jaw fell to the floor in amazement because in in one single moment the English mainstream media, whom Darke is very much a part of, finally revealed its dirty censorious hand. By this comment Darke revealed there was to be absolutely no mention of Mesut Ozil’s exclusion from the Arsenal squad by the broadcasters.

It all began to make sense. The NBC-Peacock online channel, which has the American rights to the PL and depends primarily on Sky and BT feed, was also fully into the conspiracy of silence. The two in-studio pundits Robbie Earle and Robbie Mustoe and anchor Rebecca Lowe, who by the way are all English, did their ultimate best to never mention Mesut Ozil by name in the build-up, half-time review and post game summation even though they spent time shedding crocodile tears about Arsenal’s lack of creativity.

Well at the 60th minute Brendan Rogers was able to bring on Vardy for Praet and as they say that was “all she wrote” as 10 minutes later his shot did not only score a goal but started the destruction of the mainstream narrative that Arteta is the big savior of Arsenal who will take the club to the top-4.

Narrative of lies and dishonesty

It is all a narrative of lies and dishonesty in which the mainstream media and the big social media accounts are all complicit. We have seen this movie before. Emery had his 22-game unbeaten run until PL teams figured out Arsenal had a big name but played small ball.

Once Leicester scored and Rogers dropped them into a 5-4-1 formation it was all over bar the shouting. Our only threat to them was scoring from set pieces. That is now the template for all the lower and mid-table teams in the PL. They will further expose Arteta’s bus as weak and powerless.

I see absolutely no prospect of top-4 playing this kind of ball.

For there to be any change only we the fans will be able to force the hands of the Kroenkes. Put no trust in mainstream media or our big social media accounts. They are all lying and covering up.

Welcome to another winter of discontent at the Arsenal.