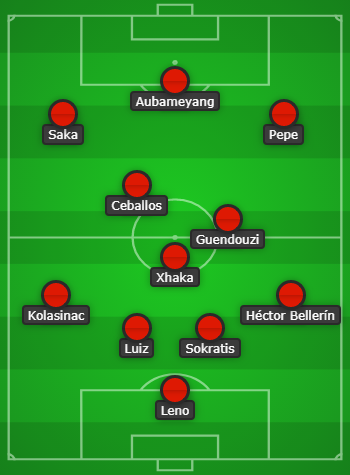 League tables tend to be a mess in the early part of the season. Something I just glance at rather than seriously consider before the first 10 games. But Leicester’s demolition of Southampton made me look at the table with a bit more interest, and it’s quite a sight at the moment. They’ll be looking to change that today, but currently Spurs are down in 10th, ManU in 15th, while Arsenal are in 5th. Meanwhile Leicester and Chelsea are up in the top 4 and will remain there until the next round of matches at least. Arsenal can close the gap on them to just 2 points. But today’s opponents, Crystal Palace, are just a single point behind us. They tend to play on the counter attack with Zaha as their primary ball carrier and threat. He hasn’t had the best of seasons for them so far, and they have scored just 8 goals (of 92 shots) and have conceded 10. Their defense however has conceded 10 goals to Arsenal’s 12.

Both clubs lost their last PL game and will be looking to set things right. Especially eager, I would imagine, would be the aforementioned Wilfried Zaha. In the summer he’d made it quite clear he fancied a move to us, the team he supports, only for Crystal Palace to price him out. Arsenal ended up making a record move for his international teammate, Nico Pepe. Zaha’s seemingly taken it well and offered words of support and encouragement to Pepe, but I’m sure he would feel some extra motivation to show Arsenal what they missed out on. Whoever’s playing at RB for Arsenal can expect a torrid time from him today.

Pepe himself offers Arsenal a threat of their own. His midweek exploits in which he saved Arsenal’s blushes against mediocre opposition ought to give him some confidence, which, to me, is what he’s been missing. With Arsenal mostly attacking through the wide areas, a fully firing Pepe can be the key, especially if our swashbuckling fullback Hector Bellerin is fit and firing again and able to offer him some support.

The other big story, that just won’t go away, is of course, the Mesut Ozil vs Unai Emery feud. Caught on camera having a seemingly less than friendly conversation prior to the Vitoria game, Ozil then used his social media to post a picture of himself laughing, widely interpreted as mocking Emery. Emery himself has gone from saying Ozil is training well for the last 2-3 weeks, to simply refusing to talk about him. The matchgoing fans let Emery know what they thought of his treatment of a player who personifies the silky football they have long been accustomed to and expect. ‘We’ve got Ozil’ rang out at the Emirates Stadium even as Arsenal were managing to lose in less than glorious fashion to their Portuguese opponents. Emery was so shaken he didn’t even celebrate the winner by Pepe. It’s not that big a deal in itself, but it was strange to see from a coach who keeps gesturing and shouting at every little event.

That’s 6 straight matches now that Ozil has been completely kept out of the matchday squad. Any one still pretending this is about football clearly has no idea about the sport. It’s personal, it’s petty and it is very, very unnecessary. It’s certainly very un-Arsenal. I don’t expect him to be involved today either.

Speaking of un-Arsenal, Spurs are 3 points behind us, and play table topping Liverpool today. After talk of a much vaunted power shift and a new era managed better than Arsenal’s stadium move, Spurs are finding out how difficult it really is to keep consistently performing at a high level. I don’t expect their bad form to last. The players haven’t given up on Pochettino, which at one point seemed a possibility, and they still have the referees to support them. Even in the age of Mike Riley’s VAR. Of course, the refs will themselves have divided loyalties when they play the Scousers today, so it should be an interesting match. From Arsenal’s perspective, it represents a good opportunity to increase the gap on them and get into the top 4. As is evident from all that has already transpired around Arsenal, the top-4 battle looks increasingly difficult.

Today is the Hindu Festival of Lights – Diwali. It represents the triumphant return of hope after vanquishing evil and ignorance. Wishing you all a Happy Diwali and may today prove to be a day of such triumph for Arsenal. COYG!