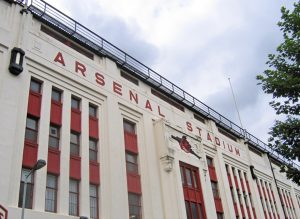 The historic halls of Highbury weep in shame.

Arsenal vs Crystal Palace was another demonstration of the trashing of the values of Arsenal Football Club and the decline in standard of football. Blackburn George and yours truly discuss how the club now treats players like sh*t and destroy the values of respect and honor that our football club was once renowned for.

Xhaka was thrown under the bus joining Ozil and Koscielny as well as the youngsters Willock and Maitland-Niles.

Contracts are withdrawn and players treated with disrespect without any regard for their well being or any contractual agreement. Once upon a time an agreement with Arsenal was sacrosanct. Now the club trashes a player’s reputation through deceit and lies in the media prior to walking back on any agreement. Cazorla, Ramsey and Monreal come to mind. Sooner than later this will damage the playing staff at the football club.

Emery bears immediate responsibility but we find Raul Sanllehi ultimately accountable as Emery reports to him. In his capacity as chief executive for football operations he must approve these decisions. The club is going down the gutter under his management. This is regardless of whether or not there is a change in the head coach.

Said change in manager/head-coach is a necessity, something George and I have said many times previously. and now a popular cry among Arsenal fans. Again reflecting how far values and standards have declined, many fans are now desperate for the classless Jose Mourinho to become the club’s new manager simply because almost all feel he can do a better coaching job. Rather than set some standard to which Arsenal will not fall, Sanllehi had him as a specially invited guest of the football club at a recent Europa League match. How much lower will the club go?

There is much more details in our newest podcast. We look forward to your feedback and comments. Like and subscribe to our podcasts wherever you listen.

PS: We apologize for technical problems that prevented any podcasts for the past six weeks. Hopefully they are behind us and we are able to resume our weekly schedule. Fingers crossed.