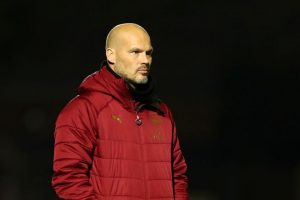 Freddie Ljunberg in the dark represents hope and fear.

It was to be Unai Emery’s last game of his Arsenal career and it had everything you would associate with the Spaniard’s tenure at the Emirates.

It was lowly anticipated on the field and highly off the field; never have Emirates been so cold and empty, filled with confusion, lacking identity, style and the aura of playing in a stadium of a big club. Furthermore, it was bleak, unimaginative and full of typical bizarre tactics, player roles and substitutions. The only thing that seems to differ now a days from a typical Emery game is the end result.

When full time whistle was blown, Arsenal not only registered their first ever home defeat of the season but also extended a win-less run of games to 7. To put everything in perspective, this is Arsenal’s worst run of form since 1992 back in George Graham’s era. Never under Arsene Wenger did Arsenal suffer and went so low. “We’ve got our Arsenal back!”?, oh it seems like we have.

While I would like to talk about the game and how it unfolded so horribly yet again for  Emery, frankly it felt like  a passing phenomena acting as a catalyst for everything that everyone knew was going to happen. It was like we were in a waiting game throughout the 90 minutes and the result somehow didn’t seem to matter much.

Recently the Spaniard has often seemed like a dead man walking, sulking deep on the touchline. And tonight, it was so visible. When Kamada scored again to put Frankfurt a goal ahead of Arsenal, Unai Emery was a picture to behold. He looked like a man not only angry but rather disappointed, not at himself or players but rather his luck which seems to have run out. A luck that was so happily on his side last season in that famous 22 unbeaten run but now it seems like that was the only thing standing between his Arsenal and disaster.

It was only yesterday that Arsenal sat 3rd in the table and fans using that to back Unai Emery but now you will struggle to find any man in his support and the most surprising thing that can happen this week is if somehow Emery survived till Norwich.

Emery after deciding to go with near complete first team players, decided to experiment David Luiz as a defensive midfielder while Torreira sat on bench to wonder. The experiment didn’t cause any flashes nor alarms and ended prematurely when Luiz was forced off due to injury in first half.

Frankfurt struggled to string two passes together in midfield while on other hand Arsenal struggled to create even though Frankfurt were so awful. But even with the chances that came our way they were negated brilliantly by Frankfurt’s keeper who had a night to remember.

This was part of the reason that when board saying 5 extra minutes was raised high on the sidelines, Emirates frowned. “5 more minutes to bore ourselves to death?” Oh for God sake!

So, it was rather fitting that in that moment Emery’s lone warrior and protector Aubameyang stepped up to convert another individual moment into the back of the net for Arsenal opener. A perfect tribute to send off Unai Emery, I would say.

But sadly, that is how good the night went and after this, it was a disaster and a disaster that we all knew was in the store. Frankfurt looked a different team in the second half, though it has to be said that Arsenal hardly exhibited any control in the game ever since David Luiz went off and was replaced by Guendouzi.

This little period of pressure resulted in Kamada scoring a brace with one a great curling drive off his left foot and the other a half cleared Arsenal clearance punished on the edge of the box.

Emery, who has shown himself to be proactive in making subs, looked rather shell shocked and a man who looked like he had given up. His substitutions rather went with the flow rather than to change the flow as we saw Arsenal trailing and both Lacazette and Pepe left on the bench to look on helplessly. Though it has to be said, that injuries were kind on Arsenal as well.

Boos echoed across partially filled Emirates and the sack was eminent which at the time of this writing has been put in effect with Freddie Ljungberg taking the role of interim head coach.

Emery was never an Arsenal manager, it just took us 18 months to understand that fact.

I don’t know what to expect from Freddie but I do know that he knows the club, players and has personality we can associate with Arsenal and hope he will do in his best to cherish and protect the values that Arsene instilled in this club. Will he be the long future? That is too early to say!

This is the first time in my lifetime I have witnessed a manager being sacked at Arsenal midway into the season and it has left me feeling scared and fearful of the future. That is because I always knew what to expect from Arsenal. No matter the results, Arsenal were always a guardian of high values and principles and we knew that at the end, no matter how bleak the situation became, we had trust in the process to see it off. But now I don’t feel the same. I don’t know who at Arsenal are guardians of their values and principles, I don’t know if we will see the light at the end of this dark and I don’t trust the men in charge of running this football club to make the right decisions.