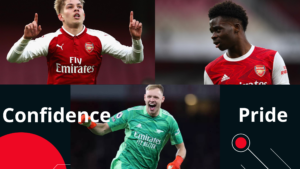 The international break is now over and Arsenal are set to resume their season with a trip to Anfield. The break came at a somewhat unfortunate time since we’d built up momentum. But on the other hand, it should allow us to draw a line under the run and look to start afresh.

I found myself more excited and drawn to Arsenal as a result of the break. away from the constant noise from and around the club, I felt motivated to look back at some of our performances and goals. I watched highlights of our youth matches but was disappointed the dot com doesn’t show all of them. Even so, it was good to connect with the football again away from the noise.

I don’t think we’re playing well as a team, especially in attack. Saka and ESR though, have been amazingly good. We’re so lucky to have them.

ESR should be brimming with confidence as he saw his run of good form rewarded with an England call up and a debut on goal. It was only San Marino and a 10-0 win, but Emile still deserves to be proud of himself. Joining him in the starting lineup were Aaron Ramsdale and Bukayo Saka. It can only be a good thing for our confidence as a team. If Auba and Partey are declared fit, we shouldn’t approach this with any sense of inferiority.

Liverpool are a great side, but I don’t like the ‘pragmatism’ many of our fans are accepting. We should be looking to win. In that, at least, Arteta and I are in agreement.

Keeping a 4th away clean sheet

Mo Salah will have something to say about that of course. He’s got 7 goals and 2 assists in his 9 appearances against us and will be joined by a fit again Sadio Mane. Ramsdale and the Arsenal defense will have to be very strong to ensure Arsenal keep a 4th consecutive away clean sheet for the first time since 2005.

If we get a win we’ll go ahead of Liverpool which really would be something to be happy about. It will however only put us level on points by opposition compared to last season. Therein lies the challenge. To prove that the unbeaten run was genuinely a foundation for more, rather than a generous run of fixtures and a bit of good luck.

Arsenal fans wanting to trust the process have gotten adept at selectively picking stats which prove just how good we are. But the real proof will be in performances and results against the top sides. We’ve got the talent. Now we need to live up to it.

In the latest Positively-Uncensored YouTube match preview with Shotta, George and Ehab; while there is acknowledgement of Arsenal’s recent improvements and hope that this is a platform for success, there is universal concern about the gap in standards between both teams. Click on the link below: