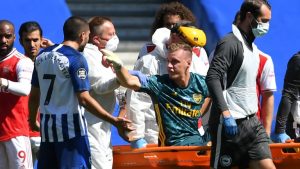 Bernd Leno giving it to Brighton’s Neal Maupay for causing his injury as Arsenal are defeated (Photo courtesy of fair use doctrine).

There was a time when Arsenal was the only undefeated team in 2020 but now after the restart it finally seems like we are in sync with the disastrous year that this has been.

After Manchester City’s European football ban, there was a ray of hope that, with a good run, we still might have a chance of getting Champions League by finishing in the Top 5. But after our recent debacle at the hands of our new nemesis Brighton, it seems we must worry more about out Top 10 place.

It’s hard to figure out where to begin with this. The game itself had few good moments of football and rhythm to talk about but it was overshadowed by the horror injury to Leno. The latter was significant because of what transpired thereafter; the same man responsible for that injury turned out to be their match winner with literally the last kick of the match.

It was just five minutes before half time. Both Arsenal and Brighton had started the game at a good pace with the Gunners creating better chances. Then a simple long ball into the box saw both Leno and Maupay compete for the pass with the latter shoving the former when he was midair resulting in an awkward fall that messed up his knee horribly. Leno was in anguish and his cries of pain could metaphorically be heard from a mile away.

Medical staff came rushing in. Maupay stood there like nothing had happened while the Arsenal players seemed stunned in silence and disbelief. The day and most probably the season was done for Leno as he was taken off on a stretcher. But before leaving he had few words to say to Maupay making it known to everyone what he thought had happened. Anyways, Emi Martinez was bought on as the substitute and the game resumed.

May I remind you that this was a must win game for Arsenal. Dropping points here meant that Arsenal would start losing pace with Top 6 and with that could say good bye to any remaining hope of European football.

Some big decisions needed to be made in team selection and Arteta once again came up with one that left mixed emotions. He brought back players like Lacazette and Pepe which was positive but he chose to start in a shape which Arsenal had never done under him.

It looked like a 4-4-2 on paper but in reality it was 4-3-3 with a midfield 3 of Guendouzi, Ceballos and Saka. The Frenchman got the orchestrator role right at the base but as in the past, under Emery, he failed to do anything of note with it. In fact his continuing lack of understanding of the role should be a cause for concern.

Ceballos, well it’s better not to say anything of Spanish. The sooner he is shipped back to Madrid, the better.

Saka on the other hand was lively and could have given us the lead inside first 10 minutes but he saw his shot come off the top post. Later he made his influence known on the left wing when he provided a decent cross into the box for Lacazette which was saved superbly by Ryan.

Arsenal posed more threat but without any control of the game. Brighton did little on the other end only troubling Martinez once.

The second half was more open with Arsenal taking more risks and in doing so allowing Brighton some decent counter attacking chances. Aubameyang had couple of decent opportunities which were saved by Ryan. On the other hand, Maupay drew a close save from Martinez at a tight angle. Moments later, Arsenal had ball in the net via Aubameyang only for it to be ruled offside due to a big foot.

Arsenal gained more confidence and soon they found themselves ahead through a finish that is becoming typical of Nicolas Pepe, once again showing he always has a moment of brilliance within him. Cutting inside onto his left foot, he found a space and let it go over the right hand of the diving keeper perfectly into the top corner.

Seemed like the normal business had resumed but the fate had a different kind of normal in mind. Brighton soon got level through a corner. A low cross saw Holding horribly trying to make a clearance on the goal line only for it to somehow find it’s way over. Typical Arsenal goal, no?

Rubbing salt into the wound

That prompted Arteta into making some choices and off came Lacazette for Nketiah. Still nothing happened. Then came another big decision as Arteta brought on a defender and two midfielders, who between them, have shared 6 goals this season while leaving 10-goal Martinelli and our best playmaker out on the bench, when desperately needing a goal to win this game.

To me it looked like a substitution that you make in order to preserve a lead or a draw rather than going for the win. He ended up with 5 defenders and only 2 attacking players on the pitch at the end. Does that seem like he was going for a win?

In my opinion those  decisions cost Arsenal dearly as we created next to nothing and Brighton ended up getting one last chance for Maupay to rub the salt into our wounds and complete Brighton’s first double ever over Arsenal.

Arsenal players, who had stood still when Leno got injured, suddenly remembered to react with Guendouzi grabbing Maupay with his neck. Some call it fight and passion. For me it was simply disgraceful and pathetic behavior for an Arsenal player showing he can’t take a defeat like a man. If you had to do it, the best time to fight was after Maupay inflicted the injury not when he had just scored a winner.

These two games have left big questions hanging over Arteta’s head and he can’t now just hide them behind the wall of platitudes as he did after City. Bottomline is he got his tactics and, more importantly, his substitutions wrong. To me it was a perfect example of manager losing a game.

We are quickly going into the state of nothingness as far as this season is concerned and Arteta must steer this ship back on course otherwise the edge of the world is not far away.