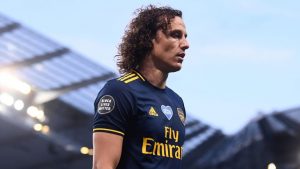 David Luiz’s 26 minutes of madness culminated in a red card.

When football season came to a halt due to COVID-19 outbreak, a selfish part in me rather hoped that this season be called null and void. Let’s be honest, with Arsenal on track for their worst season in the Premier League era and Liverpool top of the tables, it would been for the better good. But frankly, with the passing of time, I missed football and especially I missed watching Arsenal play and stopped caring about who wins the damn thing.

After such a long break Arsenal on the night were undercooked both tactically and physically with players dropping to the ground like mere flies. Any tactical setup that Arteta had in mind never came to fruition, in part because of the wrong lineup and also because inside the first 5 minutes, he ended up losing probably his best midfielder.

Arteta decided to go with all muscle and work rate over technical flair and skills on the night. The whole setup was very much reminiscent of his predecessor bringing back some painful memories for us fans. The idea was to soak it all up in defence, work tirelessly in midfield and then free Nketiah and Aubameyang in promising positions. Over the course of 90 minutes, it’s hard to fight Arteta’s case as not a single thing ever materialized. And the lack of playmakers on the pitch only made Arsenal look like a one trick pony.

And just like the prior fixture, City ran away with 3-0 scoreline to their name, which could have been even much worse if it had it not been for Leno. At times he was the only thing standing between City and the goal. In the 1st half alone he denied 3 to 4 good chances especially those that fell to Silva and Mahrez.

At the 45th minute mark, despite two injuries suffered, it’s fair to say we looked okay. Not in control of the game but at least we had not conceded. But all of that changed in one moment of sloppiness from our high profile summer signing, David Luiz.  Initially he was dropped by Arteta, amid contract talks, and only came on because of an injury to Mari. His failure to cope with simple knee height ball into his path was tragic to say the least as he gifted Sterling his first goal of the year. Unfortunately, it was not to be his last trick of the night.

From then on it was clear that any tactical plan Arteta had went out of the window because once you chose such a lineup and you find yourselves behind it’s hard to come back.

In many way, this game can be described as David Luiz’s 26 minutes of madness. He came, he saw and he faltered. One mistake leading up to goal followed by one stupid foul in the box resulting in penalty that De Bruyne dispatched and which also saw him get a red card to top it up. If this was his audition for a new contract then we all hope that Arteta sees some light in this matter. Our defence has become so awful that Mustafi has emerged as it’s new leader. Think about that for a second.

In whole 90 minutes, Arsenal failed to produce a single shot on target for first time since 2017. On the other hand, we conceded 12 shots on target, never seen since 2015. In the end Arsenal ended up recording 33% possession.

To me it brings into question the tactical reasons why  Arteta decided not to go with players like Ozil, Pepe, Ceballos and Martinelli.

Every outfield player seemed like a passenger in the game with anyone hardly doing anything of note. It’s one thing to play high performing youth ahead of seniors but it’s entirely different when they fail to produce any thing of note.

They say that in Bundesliga playing in front of empty grounds has wiped off the home advantage, but credit to Arsenal for making it a routine affair as so called ‘fat De Bruyne’ ran through us like a knife through butter.

Arsenal failed to controlled any aspect of it and as the night grew so did our misery on the pitch and City’s dominance. At times it felt like a child’s play for them. And it was only fitting that City ended up scoring a 3rd goal within the 11 minutes of stoppage time after an awful injury to City’s youngster Garcia.

Maybe am too harsh on Mikel Arteta’s tactics and our play, considering it came after such a long break. But part of me can’t escape the feeling that it all started from his team selection and then injuries just made it worse. This was his chance to show how he is different from his predecessor. But, sadly, Arteta on the night reprised an all too familiar picture; the omitting of Ozil from the team structure and the lack of ambition and imagination shown on the football pitch. Maybe he had too much time to think.

Anyways Arsenal is back and in full flow with all the high drama and hope crushing moments that goes with them. A simple one step towards filling our empty lives back again with what we love.