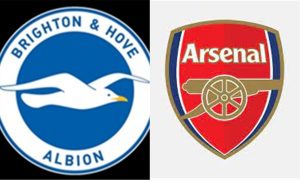 I watched the pre match press conference on Youtube because, for some reason, Arsenal don’t put the videos up on their site anymore. It must be the most boring pressers ever. About the only interesting moments were when Arteta got nervous at mention of Wilshere, and, when he used a question on crisis to turn it into a lesson on expectations. Preach, brother. And practice.

The anodyne nature of the press conference is somewhat expected in the aftermath of an exciting and comprehensive win against Spurs. And therein lies a danger for our game against Brighton. Everyone was high on adrenaline for the derby. The players, the fans, and the coach as the bench-cam would attest. We started strong, made it count, and never let Spurs back in the game.

A game away to Brighton just doesn’t have the same appeal. And though they sit near the top of the table, we are expected to beat them as a matter of course. Arsenal will have to bring their own energy with them to this game. Or at least a quiet determination.

Brighton are something of a hipster’s club under Graham Potter after the season they had last time around. They finished 16th but massively underperformed on xG. Only Fulham did worse in that respect. This season, so far, that script has been flipped. They haven’t exactly played well but have come away with some good results. Including last Monday in their own ‘derby’ against Patrick Vieira’s Crystal Palace. They got battered, but Palace missed some chances and Brighton scored right at the end to get a draw.

The player who scored that goal was our familiar foe, Neal Maupay, who of course did the same to us in a match remembered for his fight with persona-non-grata Guendouzi, when it should be remembered for him injuring Leno. Still, that led to Martinez getting his chance, which led to us getting 20m and Runarsson, which led to us getting Ramsdale and now hating Leno, so who cares. Right?

But he is their top scorer with 4 goals and Brighton put out a graphic with him doing a mock crying pose as part of their buildup to the Arsenal game. Hey, maybe that will give us some additional incentive, even without the curly haired menace. Brighton could be missing one-time rumored Arsenal target Yves Bissouma, while Danny Welbeck and Steven Alzate will be out. Arsenal of course are without Granit Xhaka but everyone else should be fit.

Which poses the question on who should play? Does it make sense to go with the same players (except Xhaka) who started against Spurs? Or will Arteta decide to change it up? The defense should stay the same, and we’ll likely see Sambi in midfield. Auba has scored 5 in 5 and he will play, Odegaard is in good form, and could he really drop the Hale End boys? My guess is no. It’ll be the same team. We can only hope they’ll bring the same intensity and pick up the 3 points.