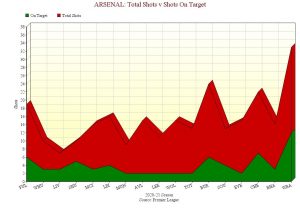 Arsenal gave the Baggies a thrashing, no doubt about it. The writing was on the wall from the 2:00 minute mark when Bellerin picked up a cross by Aubameyang and drove it low and hard towards goal for Johnstone to make his first of many saves, his block rebounding to Saka, whose right-footed shot attempt showed he was in goalscoring mood.

The final scoreline of 4-O to the visitors gave lie to Sam Allardyce’s bold pronouncement two weeks ago, after getting the WBA job, that Arsenal were fellow relegation candidates.  The truth is Big Sam was not alone. At the time the Gunners had struggled mightily to get a point out of Southampton with Theo Walcott, a former Arsenal man of 10-years standing, proclaiming he could smell the fear in his former teammates. Yours truly and others publicly mused if we would see a win in December.

But even those of us who were pessimistic in mid-late December always penned in West Brom as a likely win. As @shardgooner predicted in his usually excellent previews:

…WBA’s home form is terrible right now, conceding 13 goals in their last 3 and scoring just one. In fact, they are last in creating shots. But they have managed to score 11 goals in the league. They seem to spread the goals around as Callum Robinson and Connor Gallagher are top scorers with 2. Their defense is terrible though having conceded 35 goals. I think it’s fair to say we can look forward to having a lot of the ball as Sam Allardyce looks to sit deep, tackle hard, play on the counter, and have players dive.

That was indeed the case. West Brom are terrible both sides of the ball and Arsenal outdid them in every key attacking metric.

So after giving West Brom a hiding does that mean Arsenal and Arteta are on their way to glory. The pundits on my tv feed were waxing poetic. So were the faux optimists on Twitter who are blindly “trust the process” and “Arteta will get it right”.

But as the graphic at the top of this page demonstrates, it was the first time this season Arsenal have created 20 or more shots with 12 on target. In the game before, against 17th place Brighton, the club created only 11 shots with a miserly 3 on target. For most of this season we barely scratch double digits in shot creation with a miserly 2 or 3 shots on target. It is no surprise we struggle mightily against any decent opposition.

As has been pointed out on the Uncensored Arsenal podcast and on other platforms, even in his worst season, Wenger’s Arsenal were creating an average of 15 shots per game. Arteta has a long way to prove he can set up a team to consistently create chances and score goals to take this club back to the top-level.

“A win is a win is a win” to quote the American sports media. After four (4) straight home defeats including a loss to the hapless Burnley, it is good to see the Arsenal squad demonstrate it is far from being the 15th worst squad in the league as many of us argued. With his back against the wall, Arteta turned to a 19 yr-old to be his creative #10. Apparently that justifies his binning of Ozil, who even on his worst day could teach Emile Smith-Rowe a thing or two about creating chances against physical, deep-lying double block defenders.

Barely half-way through the season, there is still a long way to go. False dawn or a bright and glorious future?