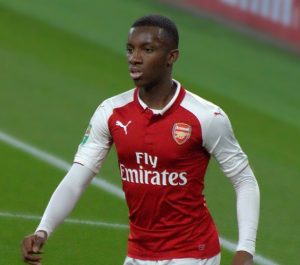 From America, where a rebel band of supporters have struck upon the novel idea of enjoying themselves and showing enthusiasm for the team to show they care. It’ll never take off, so to the action itself.

As someone who thoroughly enjoys watching youngsters get a chance, and who generally takes defeat terribly once the season is underway, pre-season is normally an enjoyable time for me. This year has been no different, and has probably been as good as any, thanks to the number of youngsters on the tour and the fact a few of them are serious prospects.

It’s not all idle fun, either. For the young lads, it is all very valuable experience. Doing (not quite full) battle with, say, Tolisso and Thiago is…not really comparable with anything from u23 football. If a young player fares well against that caliber of player, that represents a highly positive sign. For instance, Nketiah doing so well in his ten minutes against Niklas Sule is surely more exciting and revealing than him expertly finishing a couple of goals in an u23 game. We know he can do the latter; know ,too, that he could cope with senior defenders against Europa League minnows; now this, the last step, pretty much, before proving yourself against top senior opposition in serious, competitive action. It’s been a brilliant pre-season for Eddie so far.

The natural next one to look at is Willock. For at least a year he and Nketiah have damn near been a pair, including in England youth teams. Last year he did well with his senior opportunities and looked a class apart in u23 competition. The stage is very much set now to see if the two can build on the platform of their involvement last year.

Nelson, meanwhile, is a little behind in preparation having joined the squad later, and this could account for him being hit-and-miss in the Fiorentina game. It made me a little nervous. The idea was there that just 2 or 3 such games in pre-season could alter the thinking going into the season ahead, and then who knows. Hopefully not. He’s a big talent, and, by loan standards, his time at Hoffenheim looked a beneficial experience.

Slightly younger and therefore in a different category, is Saka, quite possibly the most exciting of the lot. At times, he makes the difficult look routine. Receive the ball marked, take perfect touch, turn, evade defender. That applies to his dribbling, crossing and finishing also. Perhaps this is an exaggeration but it almost seems worthy of a ‘hallelujah’ watching him beat defenders and power forward. Do we have anyone who does that in senior team apart from Iwobi?

Anyway, that brings us to one of the other things that stands out with all the youngsters almost literally buzzing around : they look so energetic. Watching Freddie’s u23’s last year the energy level often seemed to contrast so starkly with the 1st team. They had ways of playing that are literally only possible if you have the energy and speed for it. There’s been evidence of something similar in parts of the pre-season games, which makes sense given all the youngsters involved.

Now, I guess, it’s time; or, ‘we need to talk about those seniors’, and ,why not, perceptions; also, if we must, about ‘favourites’. I noticed quickly that I…may not have forgiven the lads for the season’s end yet. Whereas I have so much time and positivity for the youth players, my attitude is pretty surly to many of the senior counterparts. While it is totally right to make allowances for and be forgiving of any mistakes from the former, is it right to generally be harsh, in pre-season, on the latter? Probably…not.

Favourites, eh. Favourites and the opposite. My theory, drawing very heavily from my own experience, is that we all do this. We all decide on players, and once we have, watch out. Are any of us free of egoism in how we do football? Heck, could it be the way we transform a largely passive (unless in the stadium, with that wild idea of doing things conducive to helping players) endeavor into an active one? Our thoughts, our insights, our, gulp, knowledge, our judgments. In other words, if you spend a lot of time watching and thinking about football, you want to believe your judgement is somewhere between sound and superb.

Never decide who is very good and who…isn’t

This, inevitably, leads to deciding on players. It’s not as nefarious as all that, unless you believe that the one and only way to do football is to love your team and all who sail in it and to support them unequivocally in a particular way- in this case, like a combination of a loving mum, and a goldfish. So the names barely matter, nor the performances, you just hope for the best with each touch and kick, and never hold anything against any player. Never decide who is very good and who…isn’t.

Ok, that’s an extreme depiction. No one could be quite like that. Though frequently you get something like the opposite : extreme loathing of players. In that scenario, the tendency seems to be downplay or ignore anything decent from a player, and latch on with tremendous zeal to mistakes. There’s plenty of that going around.

And yet…there is a vast variety among professional players, and it is natural to form opinions about them. I guess my conclusion is: try not to be too much of a dick about it, do some healthy doubting (of yourself), and be aware of what it means to decide on players. I know how it affects me, moment to moment. It’s impossible for me to treat the players I like the same as those I don’t. Mostly this manifests as immediate, almost automatic reactions to what they do on the pitch, good and bad. It is ,easily, most evident in my reaction when a player loses the ball cheaply. Thankfully, a player’s status can change in my mind, but never quickly.

And yet…I find it hard to believe I could be too wrong about any of them, once decided. Really, on Mikhi, on Kola, on Jenkinson, Elneny, Mustafi…

These are not bad players. Depending on where you draw your lines, they are good or quite good players. Like all players, even Messi, they have their particular characteristics, and their flaws (Messi is not tall). Unlike many players from our strongest squads/sides, they have the misfortune, if you like, of not playing for us when we are at our very best. It’s easy to imagine that each of them, individually, would appear better players ,and be criticised less, if playing for us when we had a stronger team. Likewise, plenty of figures remembered fondly, or with no angst, from times past, because they were around when we were so good, would be torn into if playing for us now. Partly that’s just the Internet age, of course.

So, oh yes, pre-season, and where we are at. Enjoy watching these youngsters. They are a source of hope, but it is difficult to quantify that hope in any way. Every positive action out there, let alone an excellent performance, counts…sort of. Generally speaking, taking a chance, should improve a youngster’s chance of getting another opportunity soon, and so on.

There is cause for considerable optimism regarding the young players at the club. It’s not crazy to dream of ,say, 1-3 of them becoming very big players for us, others contributing, too. Enjoy that hoping and dreaming. Fingers crossed. Cut it with some realism, though. Among the many things which can go wrong is the swine that is untimely injury, the huge pressure for results and the growing trend of youngsters being reluctant to sign new deals. Not so much ‘show me the money’ as ‘show me the playing time (and the money)’, and even that with zero guarantee a player will sign on. Yikes.

With the senior pro’s, pre-season can’t really teach us that much new about them, though it can give an indication of fitness, likely form and, maybe, contentment.

We’ll see. Maybe I’ll have more to say on them once pre-season is done and we are about to get underway with the real thing.