Rich aka StillARich (@whatsinaname81) is willing give Emery 2-3 months. Final article in the series. 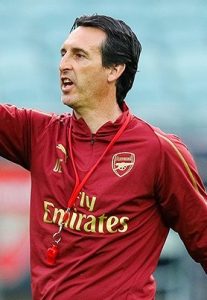 Not seen anything to make me think he’s definitely the right guy/a great manager.

Not convinced he’s as bad as some believe he is.

Could be I am still suspending some judgement simply because I did not believe there was any prospect of him not continuing into second year, so figured may as well delay a little while making a full judgement.

Basically feel like the real reckoning is this year- same or worse than last expect he will leave- so waiting to see how it unfolds, and with, I expect, a bit (maybe a lot) less patience than last season.

Felt we were…about par, results wise, going into final weeks of season…and was massively disappointed with what we produced. Squad, Emery, both, whatever…not to be able to perform better when chips were down was disheartening, dispiriting, worrisome, and generally…damn painful.

Main concern was that we were not able to shore up defence. I was prepared to lose some style points, at least initially, and even lose some threat at times in attack, if it meant a significant improvement in defence. There was no improvement.

Grew tired before season’s end of reliance on wing backs for width. Opposing teams had it sussed, and we didn’t seem able to adapt.

Our home and away issues of previous couple of seasons remained and hit us hard.

I am pretty reliant for optimism going into new season on at least a couple of good signings in problem areas.

I want to see what he and team have in response to dismal end to last season. No idea what will happen but I have not managed to shift negativity as yet of how that made me feel.

5th or 6th place next year

If I have to guess it would be 5th or 6th place this year, with serious threat of missing out if we aren’t improved, from Everton, Leicester and maybe even Wolves and West Ham. But can’t categorically say we won’t have good year and get top 4.

We’d need to improve for that. Signings seem crucial, perhaps Bellerin and Holding can help a lot, just maybe one or two of homegrown can come in and have impact. Maybe a wide man or two can transform our wing play. Ceballos would excite me immensely, and all our fans crying out for extra skill in team should be delighted if he joins for a year.

Pain is the best teacher

They say pain is the best teacher so I expect to find out quickly what the end of the season did to Emery and where he goes from here. Back to playing from back? Change of approach in wide areas- specifically winger types doing more as opposed to full/wing backs? How much was conservatism a response to being a bit shocked by prem, feeling pressure, and then having that very clear end goal/game in mind…or just who he is?

I think I’ll have an answer within 2-3 months whether it can work for him here. Am leaning quite heavily to no but still hoping that opinion can be changed, as I want success as soon as possible, and would obviously prefer next season to be a good one.