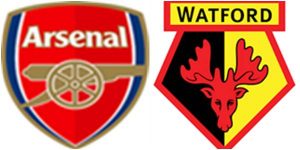 This game, like much of the season, is an exercise in ‘Oh what does it matter?

Normally the end of the season would bring reviews and analyses and transfer talk, which I’d lap up. I’m sure the more dedicated ones will still indulge, but it just feels a bit unnecessary right now. The season’s been too messed up from the start. The coronavirus disruption didn’t help but it was a washout from right after Baku when Emery was allowed onto the plane. He, entirely and predictably, sunk us to a position we’ve been scrambling to recover from. Having finally been kicked out  he continued to take potshots at us. He’s now got the job at Villareal. I do not envy them. The yellow submarines are all set to submerge with Unai at the controls. No wonder Santi left.

The Hornets or the Cup

Meanwhile it’s on us to send down another team in yellow. Here’s the status as we take on the Big ol’ moose of Watford. We can finish no lower than our current 10th position, so we are still a top half club. If we win and other results go our way, we could overtake the mighty Sean Dyche and Sean Bean United to finish 8th. That won’t be good enough to get us Europe unless there’s some incomprehensibly strange set of circumstances that make it possible. If they exist, this year might just find a way to make it happen. But our motto for the day should be “Murder Hornets 2020”, because they will be buzzing. From their point of view, they need to better Villa’s result to stay up. They are only behind on goal difference (-1) and goals scored, so they could lose and still stay up if Villa lose big. But that’s not something Messrs Dean and Deeney will take for granted. Yes, Mike Dean is the referee. Rejoice.

I’d be tempted to rest players for this game. Apart from a few million in prize money and having to see a happy Deeney instead of making him choke on his bollocks, there’s not much at stake.

I disagree with Arteta when he says we have a responsibility to the other clubs in relegation trouble as well.

Building up for the final

But there is a cup final next week to keep things interesting/complicated. I go back and forth between wanting to rest players and wanting them to build their way up to the big game. I suspect Arteta is a bit old school and would want his players to earn their right to play in the final. He seemed to suggest this in his press conference as well, but didn’t rule out some changes. The intensity needs to be up there regardless of who plays though. The previous result and performance was disappointing. Another one of those and it won’t bode well for our hopes of Arteta winning  his first trophy.

We’ll go into that game as underdogs against a Chelsea team that could manage to sneak into the top 4 and who will be boosted by the new signings coming their way. I’m hoping for our No.14 to win us No.14 though. We’re a good team on our day and have recently beaten better teams than Chelsea. Lampard vs Arteta will be an interesting battle too. Winning will also put us into Europe. Arteta has again been putting the pressure on upper management to act so that Arsenal can be the best and not settle. Anyway, that’s for next season.

About that new kit

Something for next season but, now, also for this season is the new kit. I’m going to be a bit old-school myself and declare this trend as horrible. A kit should be specific to a season and the season alone. This change has happened in the last few years, and now at Arsenal, and I hate it. It’s a case of sponsors overreaching, with full collusion of the footballing entities of course. Anyone claiming this is good is an aftv fan. I’ll comment on next season’s kit next season. That is unless we win the FA Cup wearing them, in which case I take it all back and I love the kits already.

Mustafi will have to wait till next season to wear the kits though. It’s so unfortunate that he misses another cup final with injury, especially as he’s been our most consistent defender under Arteta. Let’s hope there are no further injuries this season. There was also some good news as Bernd Leno is training again though he will not play in this game.

Arsenal have a good record at home against Watford having won 5 of 6 games. Watford are also on a poor defensive run, having failed to keep a clean sheet in their previous 9 games. Which of course means their keeper will put in a man of the match performance against us. Hopefully we’ll play well and do enough to win. It’s the final game of the PL season. It’s not where we want to be, but let’s just end it on a high note, win the cup, and then we go again from the start.

Written by Shard aka shardgooner