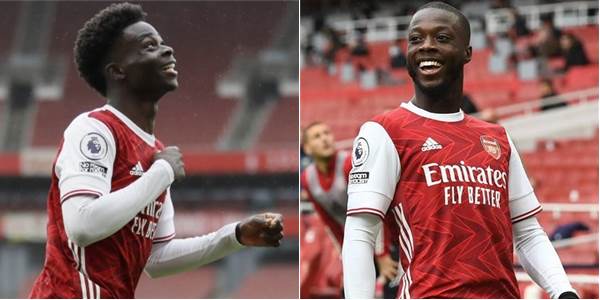 Match report by Omair Javed aka @omijaved: Saka and Pepe celebrate their goal

Arsenal continued their recent tradition of playing close tight games and winning them with the occasional moment of brilliance as they came out on top against Sheffield United with 2-1 scoreline.

Saka and Pepe scored in space of 4 minutes to put Gunners two ahead before Sheffield gave themselves a glimmer of hope 6 minutes before time when McGoldrick curled one in beautifully past Leno.

This makes it 3 wins out of 4 for Arsenal and leaves Sheffield United yet to open their Premier League account this season. The blades are finding it quite tough the second time around and one of the main reason is their creativity and goals. McGoldrick’s strike was not only their first in the game but also was their first of the season. Maybe their record signing, who missed this game due to late registration, might help them in this regard.

One scoreline the game was close and looked interesting but on the pitch it was anything but. Arteta decided to drop our leading scorer for Nketiah which raised some eyebrows. Yes, he missed chances against Liverpool but still don’t think that he warranted a place on bench.

Another big talking point was the exclusion of Xhaka. The mainstay in Arteta’s squad has suddenly found himself a competition in shape of El-Neny who seems destined to play a key role in new regime.

Arsenal tried to set the tempo early but it quickly faded into nothingness. The possession control was good but it hardly counted. The first shot on goal came in 37th minutes when Aubameyang tried one from distance.

Even though the footballing drama was limited, the talking points were many. Many say that David Luiz should have seen a red for pulling shirt but they fail to see that it was not a clear goal scoring opportunity. Then, Burge got yellow for a raised foot for which he should have seen red.

The second half was not different until Arteta decided to bring on Pepe and switch the formation to 4-2-3-1 with Willian playing the No. 10 role. Suddenly, there was a spark and for a moment Gunners looked like their old self when they played a quick passing move at the edge of the box with swagger that saw Bellerin play Saka at the far post for a simple header to put Arsenal ahead.

3 minutes later Pepe did his magic. Picked the ball close to half way mark, ran and applied the perfect finish into the bottom far corner of the net. Sheffield were done in space of 4 minutes and another defeat looked certain.

The Blades responded with substitutions of their own that saw them regain the balance they had in the first half. They pushed Arsenal deeper and deeper and eventually reaped the rewards with 6 minutes to go.

This made the game a bit interesting but Arteta quickly closed the game with Maitland Niles substitution and 3 points were in the bag.

Arsenal once again recorded 33% shot conversion in the game. This is a trend that we have been seeing this season. The lack of creativity was once again on the show but the question is how long can Gunners keep this remarkable rate of chance conversion.

Once again Aubameyang found himself a bit isolated on the left with teams setting themselves knowing that Gunners will try to exploit the route one of Luiz to Auba.

But the bottomline is we have 9 points from 12 and are level with Liverpool. We have been getting points and now we need to improve our performances and we will be good for the season. But without any sight of new signings, it’s hard to say whether that improvement will happen.