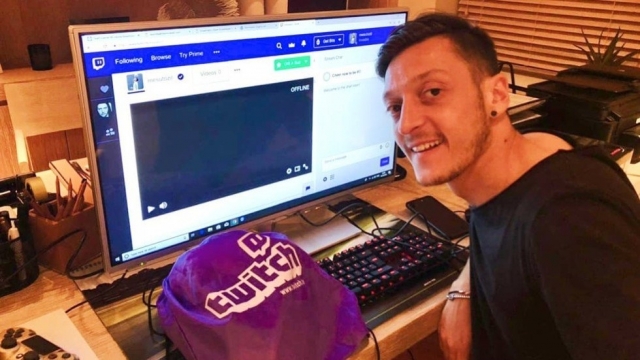 Ozil playing Fortnite at home while Arsenal is trashed by Villa

Let us not beat around the bush. Arsenal were trashed by Villa yesterday. From start to finish the Villans put the Gunners under attacking pressure, whenever they gained possession. They put the ball in the back of the net within 46 seconds of the game starting, which was eventually disallowed by VAR, and deep into the additional time Ross Barkley forced a defensive block and a Leno save from goalbound shots.  It could easily have been 6-0 given their numerous shots on target which were stopped by the hand of fortune including a magnificent clearance off the line in the 72nd minute by Ceballos.

But the pundits and, I daresay, most Arsenal fans seem surprised by this result. Even Uncensored’s ShardGooner was somewhat optimistic in his match preview, breaking a pledge he made last season, and making a prediction of an Arsenal victory. But Shard did warn that Villa has “enough talent at their disposal to cause us serious problems.” Furthermore, despite his optimism. Despite his optimism, Shard only expected at best 60 minutes of “good football” under Arteta’s regime.

Even in his worst nightmare, I doubt Shard expected so convincing a Villa margin of victory.

While this blog and a few others, especially my good friend George at PositivelyArsenal.com, have warned repeatedly that Arteta’s brand of football is too defensive, rigid, structured and dependent on Arsenal accepting that it is 2nd best to more attacking teams, almost all mainstream pundits have been willfully blind to the defects in Artetaball. Nobody is more representative of this lazy, mainstream thinking than Ian Darke, Skysports commentator, who was again on my broadcast feed (Andy Townsend being his usual accomplice). After virtually fellating Arteta throughout much of the 1st half, highlighting Arsenal’s victory over Man United last week and the two cup wins last season, poor Mr. Darke was so surprised and flabbergasted by Villa’s dominance, at the 72nd minute mark, he asked, with all profoundity and seriousness, “who could pave predicted this”?

Glossing over the negatives and blocking-out Ozil

Although Arsenal had a historic win at United last week, almost all  mainstream media glossed over the fact that Arsenal has been poor at creating shots all season and this was evident ever since Arteta went into that low block, defence-first football since Project Restart. So bad is Arsenal at creating shots, at United we only had 7 shot attempts with 2 on target. The media downplayed the fact that the only goal we scored was not from open play but a penalty caused by a ridiculous tackle by a so-called big-player, who would be expected to use better judgment. In fact Arsenal has gone 4 straight PL games without a goal from open play.

Most of all, while mainstream media heaped well-deserved praises on Arteta for his clever tactics at United (being disciplined, energetic, keeping it tight, yadda, yadda…), they maintained their continued blackout of any discussion as to how and why Mikel Arteta and his bosses have excluded and failed to register in their playing squad, the PL’s best attacking-midfielder, Mesut Ozil, letting him sit at home playing Fortnite, while the team struggles to create chances.

No wonder Ian Darke and his cohorts are simply useless at giving any coherent explanation of the struggles Arsenal will face when they play any decent mid and upper table team who will let them have the ball, especially at home. If such a team can create chances and score on the counter-attack, Arsenal is virtually guaranteed to lose the match.

This is exactly what Villa did. Possession was 59% – 41% in favor of the Gunners who did fook-all in creating chances, unless you think flinging crosses in the box in the hope Lacazette will get a decent header is a significant threat to Emi Martinez, who loves them high, or to Tyrone Mings who apparently drank mother’s milk on defensive headers. Final stat was Villa 15-shots, 6 –on target. Arsenal, in contrast, had 13-shots, only 2-on target. At home we are outshot. Fooking hell.

There was a time when Arsenal used to field swarms of attacking midfielders versus Villa, dominating possession and creating chances, forcing the opposition deep into their defensive 3rd, desperate to win the ball back for a counter attack. I even remember a year in the noughties when Villa were in their pomp, desperate to get top-4; we went to their place with Hleb (and Fabregas) running riot over them and despite him getting a kicking we left the midlands victorious.

Yesterday the tables were turned 180 degrees. It was Grealish and Barkley running the rule over the Emirates. Grealish usually started out wide on the left and coming inside to combine with Watkins. Barkley did most of his work on the inside. Clearly we got the wrong Chelsea player. Obviously Kia Jaroobchian is not his agent.

The key point about the Grealish-Barkley combo is, while Villa strengthened with two attacking Midfielders, Arsenal picked up a worn out second-hand Willian to play the role and for “footballing reasons” decide to bin Ozil from the squad. Instead our central midfield is dominated by two destroyers who tackle and distribute. Poor old Elneny was then expected to carry the ball forward and create, something he’s never been renown for in his entire career. Who ever thought the DM combo was a good idea playing at home?

None of the foregoing facts Ian Darke or the well paid frauds, acting as experts on NBC-Peacock, are prepared to discuss in a fair, balanced, uncensored fashion. No wonder so many Arsenal fans couldn’t have predicted a Villa victory. Unfortunately, if we keep playing this Artetaball, we may get a big result here and there but I predict more upsets by teams we are expected to beat.

Dollars for donuts is my bet.