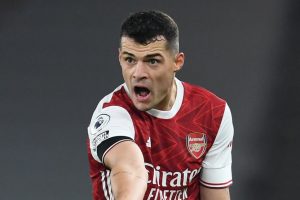 I am on record as saying for over a week now that Mikel Arteta is a “deadman walking.” Taking the club down to 15th place in the Premier League had already sealed his fate. But after allowing Burnley to leave the Emirates with an Away win for the first time in 46 years, it is only left for the chaplain to administer the last rites and for Arteta to select his final meal.

But there are some Gooners still desperately clinging to the idea that there is a lifeline out there and Arteta will be somehow granted a miraculous reprieve. They can truly point to the fact that this was a much better performance than recent games in the Premier League:

The 18 shots taken far exceed the next best effort, 13 vs Wolves which was also in a losing cause. Of the six shots on target some required excellent saves by Nick Pope particularly that snap shot in the box by Lacazette at the 27th minute mark and Auba’s header six minutes into the 2nd half.

But there was a mark of desperation about the entire effort. This was Burnley afterall, one of, if not, the worst footballing teams in the Premier League. With the quality players at its disposal Arsenal is expected to dominate and the players tried mightily despite a line-up bereft of any creativity due in large part to Arteta’s banning of Ozil and his lack of faith in any of the attack-minded youngsters.

Despite Arsenal trying desperately trying to create chances in the first half it was a turgid affair as Burnley showed a willingness to absorb pressure, often playing within their half and using long balls to hit the Gunners on the break. Which Gooner can complain when this is Arteta’s preferred tactic against bigger teams? In fact it was the northerners who had the best chance of the half when a Chris Wood header in the 13th minute flashed by the upright with Leno beaten.  But the half petered out into a stalemate with the handful of Arsenal fans allowed into the Emirates booing as the players left the field.

The second half saw a decidedly desperate (note my 3rd use of the adjective) effort by Arteta’s men to get a goal. By my count there were 4 shots on target by the Gunners within 8 minutes of the resumption, three of them alone by Auba. It was the last of his shots, which was the turning point of the match. Upon saving the strike, Pope was immediately intent on having his team counterattack knowing Arsenal were stretched. Xhaka cynically fouled the man with the ball and in the ensuing melee grabbed the antagonist by the throat, to be legitimately red-carded by the ref, after he took a look at the pitch side video.

Now it takes a special type of myopic, cynical, cretin to see Xhaka’s red-card in isolation from the desperate position that Arteta put this team. It is true Xhaka lost his cool but it is equally true that Mikel Arteta, because of his manifest coaching blunders (poor tactics and even poorer man-management), put his players in an unwinnable situation.

In the 72nd minute Burnley simply applied the coup-de-grace, doing what they had evidently set out from the beginning; pressure Arsenal to concede a set-piece, a corner, which Auba headed in at the near post under immense pressure from a Burnley attacker. For the next 28 plus minutes Burnley did an Arteta; hold out for the lucky, desperate win.

But don’t expect Mikel Arteta, and, even more significantly, the big Arsenal bloggers and podcasters, to admit it is Arteta’s poor coaching and leadership that is taking this club down into a relegation scrap. Also going down is the morale of the players who are expected to show the fight necessary to keep us up. Instead Mikel Arteta in his post game presser was quick to find a scapegoat when asked if he felt let down by Xhaka:

Yes, but honestly, I think it was unacceptable to do that action and the players are in a moment that they are so willing to do more and fight more and show how committed they are, to be alive in the game, that on this occasion Granit has overstepped the line.

Readers may recall Arteta did the same to Pepe three (3) games ago Previous to that he hung Ozil out to dry after no longer selecting him after Project Restart. Now we we learn from Chris Wheatley of Football. London that the dressing room is a poisonous toxic place with senior players appalled by the manager publicly shaming their teamates and one player, David Luiz, refusing to speak to the manager.

Moronic fans are free to pour invective on a player but never a manager whose fate rests in the commitment of his players, even the most out of favor, who he may have to call on when the chips are  down. Big accounts on twitter as well as big bloggers and podcasters make a living from scapegoating as it appeals to the lowest common denominator, the lemmings, to whom they can sell underwear and razor blades on their websites. That is now the essence of their existence. How they retain a shred of credibility never ceases to amaze me.

These so-called Arsenal fans are doing their level best to destroy what’s left of AFC, the football club they all said was too good for 4th place and any coach but Wenger could immediately improve. They are now clinging desperately to their last hope, Mikel Arteta, but even Sean Dyche and Burnley know 15th place is too good for Arsenal.

But with £800 million at stake in their leveraged-buy-out of the club, it is the Kroenkes who will have the last say on Arteta’s fate not these egotists with their over-inflated sense of their importance.

PS: Me and Blackburn George, the Arseblagger, will discuss in more detail Arsenal v Burnley in our upcoming podcast to be published on Tuesday. Tune in, please.