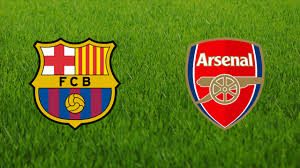 I will watch today’s friendly between Arsenal and Barcelona with great interest. Whether we win, lose or draw, I expect Arsenal to play positive, attractive football demonstrating the club’s intent for the upcoming premier league season. Arsenal might flatter to deceive, as we did at the start of last season but anything like the rancid, putrid, soul-deadening style for most of last year (exchanging it between the midfielders and defenders in our own half before passing it out wide to the wingbacks for crosses or cutbacks) is totally unacceptable.

Playing Barca also got me thinking how much the gap between both clubs have widened since we gave them the scare of their lives in the 2006 Champions League final.   We scored in the first half with that Sol Campbell header in the 37th minute header and held on with 10 men until Eto’o scored in the 76th and then Belleti broke our hearts at the 86th when he snaggled in the winner. Often forgotten is how many chances our great striker Henry had to score and possibly win the game for us. Titi is so lucky there was no ubiquitous social media available at the time or else the very emotional, stupid element in the fanbase would have had a platform to slag him as useless.

But with that stroke of fortune in 2006  Barca has simply gone from strength to strength; three (3) more UEFA  Champions League titles, three (3) FIFA Club World Cups, nine (9) more La Liga championships and six (6) Copa Del Rey titles (the Spanish equivalent of the FA Cup). In contrast Arsenal had to endure some barren years of austerity having to pay for its new stadium but at least we can point to three (3) FA cups in four years as of 2017.

But all during those years we Gunners could brag with pride, echoing the words of our manager:

“We do not buy superstars. We make them.”

Proof of the pudding is that Barca had to come snooping around to buy our best players. We sold them Henry in 2007 for €24 million; thank you very much, that covered a big hole in our budget. In 2011, after years of Barca covertly and overtly exploiting Cesc Fabregas’s Catalan connections, Arsenal had no choice but to sell him to his childhood club for £25.4m up front, with the player contributing 1m euros (£880,000) from his salary each year of the initial contract (Good Lord; Cesc had to pay to go home). Arsenal also received 5m euros (£4.4m) if Barcelona won two La Liga titles and one Champions League title in the next five years (Wenger rinsed them properly, didn’t he?).

Gooners now have little to brag about

But eight years later can Arsenal fans truly brag that as a club we are making any superstars? In the 2006 champions league final we had a 17 year-old orchestrating from central midfield, leading the line was Thierry Henry transformed into the most potent striker in Europe, leftback was Ashley Cole developed into the best in England for years thereafter and Wenger even relied on a flighty, youthful Emmanuel Eboue as our right back. If we hadn’t lost Lehman in the 17th minute that game could have ended much differently.

We could still brag in 2011 after losing to Barca in the quarterfinals of the Champion’s League. Leading 2-1 into the return leg at the Camp Nou, the referee took the unprecedented step of sending off Van Persie for kicking the ball after the whistle had blown. At the time Wenger had transformed him from a winger into a very dangerous striker. To this day most Arsenal fans think it’s no coincidence that by sending him off Arsenal lost its major offensive threat and were condemned to defeat. Additionally, we could also boast that playing central midfield that day was a precocious 19-yo English wunderkind by the name of Jack Wilshere. So even though we lost by very dubious refereeing, we still had something to hold onto; super-talented players from within who were being groomed for the future.

No future superstar from the academy

In contrast to the past, when we relied on making our own superstars, it is crystal clear to me from the current transfer window Arsenal is no longer a club emphasizing the development young players. Instead the club is increasingly being celebrated for its willingness to break its transfer record and pay £72 million for Nicholas Pepe (reportedly lashing as much as £6 million on his agent to lubricate the wheels of business), buying Saliba and returning him to St. Etienne, taking Ceballos on loan from Madrid and guaranteeing him a humongous number of games and acquiring young Martinelli and fast tracking him into the first team.

These days, hardly anybody connected to Arsenal speaks of a young player, brought in from a young age, whom the club is committed to turning into a superstar in the coming year(s). Only recently we could point to Fabregas, Van Persie, Wilshere and Ramsey whom we knew the club was devoted, fully invested  into making them world class, succeeding with three of the four as measured by the big clubs they eventually joined.

Even Josh Kroenke, who is now the real boss, seems unaware of the pride felt by Arsenal fans in seeing the development of our own young players. In his response to the “WeCare” petition, he placed emphasis on the transfer market:

“We also must be aggressive and creative in the modern day transfer market to push whatʼs possible both on the pitch and how itʼs evaluated in pursuit of the biggest trophies in English and European Football.”

Is it any surprise that Raul Sanllehi often uses his public appearances to boast of his acumen in the transfer market. A recent interview on ArseblogNews was a perfect example:

“The transfer window is a moving target, I have been doing this for 16 years now and I know that some windows are harder than others.”

Apparently none of the intrepid journalists or correspondents working for Arseblog dared ask him what he learnt from the massive scandal that accompanied the Neymar transfer to Barcelona which happened while he was an executive (like Shaggy, the reggae artist, he claims “It wasn’t me”). For those who have short memories, Barcelona’s bribing of the Neymars cost them a one-year suspension from the transfer market. Neither was there any questions about that strange deal he reputedly engineered bringing Spurs-reject Paulinho from China to Barcelona for €40 million and then one-year later they loaned him back to the same Chinese side and eventually selling him for €42 million. Is this a dodgy trading firm or a football club?

Along those lines, the loudest talk in social media currently is how Raul is now a transfer guru. He is about to take off Barca hands, another of their failures, Philippe Coutinho, and give him an opportunity do a Sacamlexis Sanchez. Based on his Liverpool and Barca track record Coutinho is predictable; he will hog the ball, shoot at every opportunity, inflate his personal stats and seek a more profitable transfer down the line. Meanwhile talented midfielders from our academy with endless potential will never get a chance in the first team. Some mindless fans on social media are celebrating, bigging-up Sanhelli for turning Arsenal into Barca’s bitch.

“I mean if Raul Sanllehi does make the Coutinho deal happen then i think he deserves a statue outside the Emirates.”

I mean if Raul Sanllehi does make the Coutinho deal happen then i think he deserves a statue outside the Emirates.

While transfer addicts around the Football Club are high on every piece of business conducted by the club they are entirely incapable of any critical thinking. How will this wheeling and dealing make Arsenal more competitive next season compared to the last? Last summer this time they were giddy with optimism as the club acquired Sokratis, Leno, Torreira, Guendouzi and Lichsteiner, convinced that those transfers by itself it would guarantee a top-4 finish.  While the club was going through a 22-game unbeaten run, many were willfully blind to the poor football on the pitch as Aubameyang frequently bailed out Arsenal with a streak 7 or 8 goals on an equivalent number of shots. Is there any evidence the manager has stopped tinkering, gotten better at managing his personnel and willing to allow the team to play to its strengths (as explained by this blog)?

So while there is no young player to look forward to as our next superstar, today I will be anxious to see if Unai can make us feel excited about our team going into the next season.