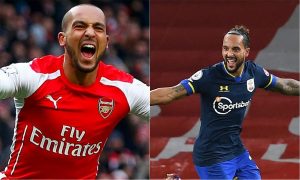 It was a special evening at Emirates. After almost one and a half months, the Gunners were able to come away with a point. To add more joy, it also meant that Arteta will not have to endure the humiliation of becoming the first manager to lead Arsenal to 5 consecutive home defeats ever And then to put the cherry at the top, he must have proud we ended up getting a very important point against a genuine Top 6 contender after once again going a man down.

Now don’t get me wrong. I know that for many Arsenal fans, getting a point against Southampton at home even with 10 men is no joy. And credit to players, they also tried to show the same sentiment post match. But for Arteta, the same cannot be said. For he looked a different figure at post match. More vibrant, happy and relaxed version of Mikel Arteta.

Why he was relaxed about, I have no idea. We sit 15th in the table, 5 points off the drop, has only amassed 14 points from 13 games, have already lost 7 games this season and a goal difference of -5. Not to mention that we have probably the highest paying striker in our team and yet have only scored 11 goals in those 13 games.

Never as bad under Emery

To put things in perspective, they never got this bad under Unai Emery and yet he was sacked sooner than Arteta. But still somehow the general perception is that he deserves time. For how long more and to achieve exactly what, is another question.

Trust the process they say. So, I say lets pause for a moment and observe that process through the Southampton game before blindly rooting for a guy that has already guided us to our worst league start in 2 generations.

In the transfers department look no further than Cedric Soares. Signed from our current opponents on a free and given 4 year contract, but could not even start as a backup to Hector Bellerin in his absence. That spot went to a young Englishmen who had a lot of suitors in the summer but was kept only to play a bit part role so far. That raises questions of its own.

David Luiz, who given a new contract, seems to have come in direct confrontation with the manager which has allegedly divided the dressing room.

Willian, another free signing on ridiculous wages, was finally dropped for Pepe after his 11th consecutive failure last Sunday.

But as the match showed, maybe the issue is not the underperforming players but rather the unbalanced tactical system that Arteta has been deploying as the Ivorian himself struggled to do much out wide.

Perhaps the biggest issue with Mikel Arteta is he has brought us on the path of De-Arsenlisation and very few seems to be aware of this. This is not the first time that Southampton came to Emirates sitting pretty in top 4. But it was definitely first time that I saw an Arsenal side concede the midfield to the Saints in my living memory at home. And we did it in a fashion in which we were absolutely unbothered to do so, which was more annoying.

Yes, we have been on a losing streak and yes, we have found creativity an issue (though Arteta has himself to blame for that) but still Arsenal Football Club used to have some standards regarding the style of play that Arteta seems to be unaware of. To set his side up to play counter attack football in Mourinho style at Emirates is just unacceptable.

Saints were the ones who took initiative and they carved us open with slick passing in the final third. Therefore, it came as no surprise that it was an ex-Gunner Theo Walcott who reminded us what we have been missing since his departure. He absolutely destroyed Tierney and Gabriel by exploiting that little gap in between and attacking it with all his pace like we all know used to. The result was a typical Theo Walcott goal and it was clear to see that he enjoyed it.

It was also clear to see the impact Theo’s presence made on Gabriel and Tierney on left hand side as he played a major role in the sending off of the Brazilian at the hour mark at the time when Gunners might have felt that they had the upper edge after Southampton had started the second half slowly.

Southampton has scored the most first half goals but in second half only West Brom has conceded more than them. And Arsenal took full advantage of this. It did take some fantastic individual play by Saka to see Aubameyang finally score a goal at Emirates this season.

Arsenal had their tails up after scoring the equalizer. But in keeping with the season trend, it was the perfect moment for Gabriel to get his second yellow and make sure that misery will continue to pour over Mikel Arteta.

The rest of the game was Arteta’s perfect scenario. 9 men behind the ball and with no desire to go forward in search of a winner, he was happy to let Saints dominate and try to break his team down.They almost did when Redmond found his shot hit back against the top bar. Arsenal had a surprising chance of their own as well with Holding seeing his header hit the woodwork as well just minutes before the full time whistle.

The inevitable however did happen and while Southampton would have been happy to get a point at Emirates once upon a time, the tables seemed to have turned. They must have rued the 2 points dropped whereas the Gunners seemed relieved to have hold on to a point.

This is the perfect demonstration of De-Arsenalisation; from style of play to mentality. Arsenal now look at home while being 15th place Premier League team. The feeling of losing our club somewhere in between was never this loud.

Change cannot come sooner enough. However, when it comes, removing Arteta alone won’t solve the deeper issue but at least it is the easiest choice.