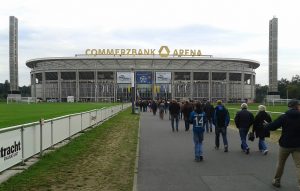 So onto Germany and the Unai Emery League; the bedrock of his career, the shining light of his accomplishments, and the scene of his final failure last season.

A 19 man travelling squad, composed of mostly senior players, was announced yesterday. Rob Holding is back. So are Mustafi and Smith-Rowe. I think it’s between the two of them to be the sole man left out of the 18.

We also have only Auba as a CF, unless Pepe or Martinelli are going to play there. I doubt it though. After the debacle at Watford, Emery’s probably not going to risk it. Whatever we may think of his tactics, self preservation runs high on his list. Though, having said that, I’m not sure it’s that much of a concern for him because he’s omitted Ozil from the squad again. ‘Rested’, along with Sokratis. Ozil has played a total of 70 minutes this season. I’m sure he needs the rest.

One thing that was not announced was who the members of the ‘captaincy group’ are. Our coach in his infinite wisdom apparently wants us to show infinite patience. I say scrap the whole thing. The idea of a captaincy group is ridiculous anyway, and it’ll be 6 weeks into the season proper before he now says he’ll make his big announcement. Does anyone even care anymore? It’s a farce.

Frankfurt are our toughest opponents of the group. On paper at least. As usual, Emery was quick to praise the opposition. He did say that we want to improve on dealing with the press, as well as long balls. Which would be good, I guess, though he seemed to be blaming the players’ execution rather than his tactics. We’ll see.

Last season’s semi finalists in the competition, Frankfurt ought to count as one of the favourites, despite selling Jovic and Haller. I haven’t watched them play this season, but my concern is Kostic at LWB running at AMN for the entire game. Still, Frankfurt have lost 2 of their 4 games in the league (RB Leipzig and Augsburg at the weekend), so they can be beaten, and we certainly have the players to do it.

I’m not expecting us to play any kind of entertaining football, though an initial reaction with a quick start from us isn’t out of the question. The best I’m hoping for is that we can nick a goal on the counter, and not make any defensive errors despite being under constant pressure. It is now our way.

Although he was talking about Ozil, Emery said he wanted to rotate for the game. So I’m going to go with the following:

Mustafi’s humiliation will be complete.

Someone should remind Emery of the eternal law of nature: “Whosoever diggeth a pit shall fall in it.”