An emphatic 3 goal win for Arsenal in Frankfurt and almost every fan, including yours truly, erupted with joy. Nobody could have been any happier than Unai Emery. Ever since the debacle at Watford last Sunday, he has come under enormous criticism from Arsenal fans everywhere in social media that the standard of football is inferior to the worse years of his predecessor (who shall remain un-named) and that this decline is due to his coaching.

But post Frankfurt everything is rosy in the Arsenal garden. The dot com is euphoric. According to Bukayo Sako, our young hero with a goal and two assists:

“It’s a very proud moment and I’m just so happy. It’s a dream come true, since I was as a kid I’ve always dreamed of scoring for Arsenal’s first team, so now I’ve done that and I just want to do it more and get that feeling many more times.”

Emiliano Martinez, who faced 28 shots but managed a clean sheet, pulling off some important saves to keep the Gunners in the game, was ecstatic:

Has the euphoria of victory wiped away all the anxieties and doubts that have plagued supporters during most of the match?

How many us remember that for much of the first half Frankfurt had as many if not more chances to score than Arsenal?

Thanks to Joe Willock, we put our noses in front in the 38th minute, when his shot rocketed by Kevin Trapp thanks to a deflection. Yet it could easily have been 1-1 at the break if it wasn’t for brilliant goalkeeping by Martinez. To be honest either side could have been 2 or 3 goals up.

At half-time any Gooner with a sembIance of football literacy would have been appalled at the ease at which Franfurt surged through our midfield, attacking the back four and getting shots off.  Shades of Watford.

The match was still in doubt until around the 80th minute mark when the Germans were reduced to 10-men after a 2nd yellow card to one of their players. Shortly thereafter, Martinez had the intelligence, after snapping up a tame shot in his direction, rather than his usual long kick, rolled it out to Xhaka for a counterattack.  A sweeping move culminated in the young Sako curling an unsavable shot to the right of Trapp. Shortly thereafter a third goal was scored by Aubameyang after an assist by Sako, his second for the match.

Long into the night everyone was justifiably singing the praises of the 18 year-old academy graduate for a remarkable performance, putting in the shade players with bigger reputations and price tags. Even the usual scapegoats, Xhaka and Mustafi, earned some praise and generally escaped any criticism.

At the end of the game I tweeted:

“Arsenal is improving; allowed 24 shots at Frankfurt vs 31 shots at Watford, a whole 23%.”

Arsenal is improving; allowed 24 shots at Frankfurt vs 31 shots at Watford, a whole 23%.

My attempt at irony was completely lost on Twitter. I even had less traction with my follow-up tweet:

“Meanwhile I can think of 17 teams in the PL who would love taking 24 shots at Arsenal.”

Meanwhile I can think of 17 teams in the PL who would love taking 24 shots at Arsenal. https://t.co/bbJx2jWZZt

I think it was Napoleon who once said that defeated armies learn best implying that in the euphoria of victory we fail to draw the correct lessons. While it may ultimately be a futile exercise, especially for those fans who only care about Wins and Losses, nonetheless I will share with you some key data points obtained from whoscored.com that suggests that while the wheel is not as deep in the mud, parts of Arsenal is still in a rut. 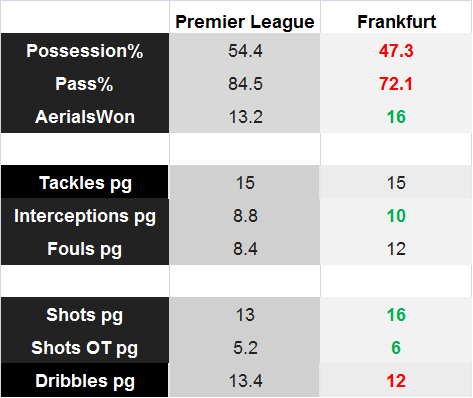 I have highlighted the improvements in green and the declines in red:

At the end of the game, in his presser, Emery sounded an optimistic tone:

“We have the possibility of using the young players, of giving them chances, to help them take their chances to play and share that opportunity with experienced players. Their performance tonight was good. We played in our way, with them, with our experienced players and our spirit.”

Let us take that sound bite with a grain of salt. He would have had little chance of studying the analytics. If he is anywhere a leader like Napoleon, once he get the reports he would recognize the need to improve possession and pass percentage and to prevent teams getting so many shots off on our goalkeeper. He had a hard time achieving that at Seville finishing one season at the top of the table for shots conceded. The jury is still out at Arsenal.