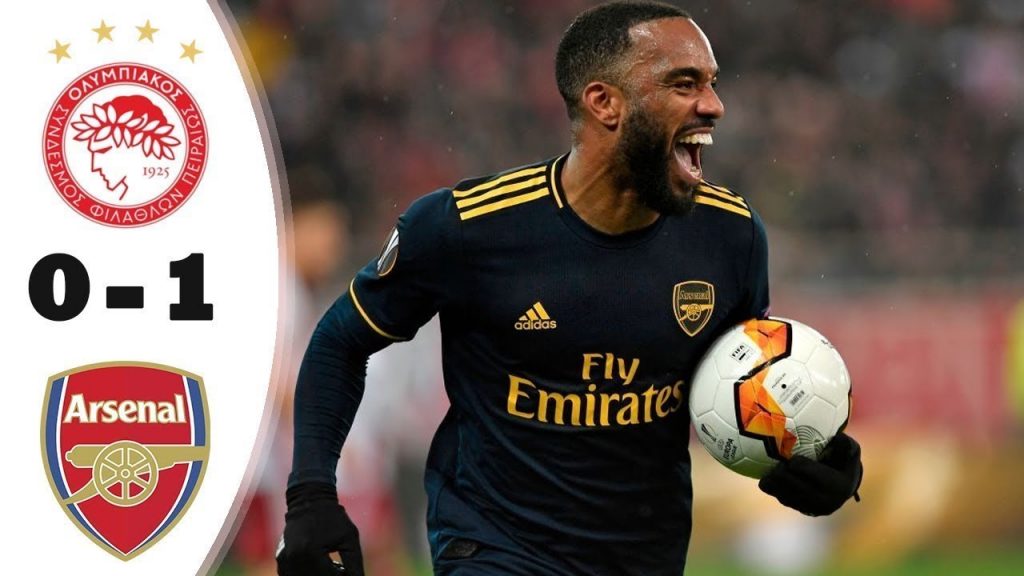 #OLYARS: Before coming into management, Mikel Arteta might have hoped that his European night debut would be more thrilling, more fascinating and close to perfection. It may not have been all he wished but he must have been exhilarated, after getting drawn with Olympiakos and going to Athens in the lion’s den, when Lacazette against the run of play found the back of the net in the closing minutes to give Gunners not only a lead but also a vital away-goal.

The Gunners were not perfect, nor flashy, nor able to produce the style which Arteta wants, but on night they were solid and for 90 minutes gave enough to not only hold the Greeks out but also penetrate them. It was a job well done and above all else Arteta would had not have it any other way especially when Arsenal in past has been accused of not being able to do it.

Anyone who thought Arsenal would be too good for Greek leaders and that beating them is no feat at all, must be reminded that this is the same club with a horrible history of February European nights. The record is so awful that it was bound to play on the minds of the players and management. In past we have seen many better Arsenal squads falter away in that pressure but on this night they stood firm thanks to in large part to the defensive trio of Leno, Mustafi and David Luiz who hardly put any foot wrong all game.

Olympiakos started the game strong and their fans in stadium must have felt that they should have been ahead in the opening 10 minutes when they saw Valbuena’s low drive across the goal saved by Leno and the follow-up marginally escaping the free Olympiakos player in the box.

Arsenal on the other hand failed to venture much forward with players like Willock unable to connect midfield with attack. But the counter attack was always on and with Arsenal’s pace there was always going to be a moment. This came about 20 minutes into the half, after some super combinational play, only for Lacazette to lash it out wide from 5 yards out. A collective groan went up in the Arsenal fanbase.

As the game unfolded, Olympiakos continued to dominate possession. Even though Arsenal were struggling to hold the midfield, the Greeks themselves were more awful in trying to progress with maintaining possession for more than 5 passes as time. Time again they invited Arsenal back in the game through their below par passing. But the same can also be said about Gunners. Their respective pass accuracy of 84 and 85 respectively shows that perfectly.

Given the low technical ability of both teams, players like Willock and Guendouzi did little to suggest that they should be starting regularly ahead of players like Ozil and Ceballos. The latter did played a part in the game but in a new role of No. 10 was hardly as effective as he was in a much deeper role that he played against Newcastle.­

As the second-half progressed both teams failed to produce anything noteworthy and it felt the game was heading towards a 0-0 draw. That was until Arsenal found a moment in 80th minute when Mustafi played a long diagonal ball across the field to Aubameyang who controlled it superbly and played it for the on rushing Saka, who was again brilliant on the night, especially when driving into the opponents box. He played-in the most perfect ball imaginable to find Lacazette between the last line of defence and the keeper. The striker did the rest to put Arsenal ahead and make sure that Arteta would enjoy a win on his first European night.

After the goal, a game that seldom produced any big moments to that point, sprung into life. Arsenal could have killed off the tie in last 10 minutes because they not only had one but two great chances to score the second goal. First, it was Lacazette whose shot was saved after Gunners broke superbly and with pace from a Greek corner. Shortly after, Sokratis hit the bar from the corner and his rebound was put wide by Mustafi under very little pressure.

No matter what could or should have been, to come to Athens and win was the main task of the night for Gunners. It should be enough to advance from this round when they face the same opponent in front of their home crowd at the Emirates in one week’s time.