2 games, 2 wins, for the first time in 10 years. Burnley were tough, physical opposition, and Mike Dean was Mike Dean. But two great goals from our dynamic duo up front were enough to give us the win.

There were some encouraging signs in how we played out from the back. Of course Dani Ceballos had a lot to do with it, even though he nominally started in the No 10 position, he often dropped deep to help us against the Burnley press. But the biggest contributor to it in my opinion was David Luiz. He brought not just his passing ability and forward movement, but also some sense of calmness to the defense. Never would I have thought I’d welcome David Luiz to Arsenal, but I was happy with his signing, and the Burnley game showed why he was brought in.

Many of our fans seem convinced this is the blueprint for how Emery wants to play. Maybe it is. Maybe he just needed Luiz and Ceballos to play the way he wanted to all along. Or maybe it was just a home game against Burnley where it was possible to play around them. Liverpool will be a sterner test and could provide some answers.

I saw Ceballos and Guendouzi both play the ball across our box in what to me seemed a dangerous manner. Klopp’s legendary Gegenpress will seek to capitalise on any slip up in possession/passing within our half. But it appears to be the plan to invite the press high, so as to have space behind them. It’s a risky strategy.

I also have some doubts about how high the potential for reward is. Especially if we set up the same way as the Burnley game. The forwards still seemed isolated up front. The centre of the pitch wasn’t as vacant as at Newcastle, but there was still a lack of support for the forwards. Ceballos registered 2 assists, but neither of them were from what you would call creative play. Both goals came from individual brilliance rather than carving the opposition open.

Despite these worries, I think going all out is the only way to approach this game. If we try to sit back, we’ll be demolished. Liverpool are on a higher level right now, but we cannot surrender the initiative to them. Our best hope of scoring will still be on the counter, but our best hope for not conceding is in not sitting back. We need to be prepared for the intense pressure Liverpool will put on the ball, and have the awareness to hit it long sometimes even at the cost of losing possession. But maintaining possession would be the best bet for dealing with Liverpool. If Emery sticks to playing this way, it would also address one of the biggest criticisms aimed at him. Namely, of lacking an identity.

Inspired by the hope of a tactical revolution by Emery, I am doing what I normally wouldn’t, and that’s discussing at length which players I think should start. Not necessarily something everyone will completely agree with. I’d be surprised if anyone did. But I’ll try to put forward some reasons along with the picks.

First up, controversial as it may be, I’d play Ozil as part of the front 3, and keep Ceballos as an 8-10 hybrid that Emery loves. Ozil is an underrated threat on the counter. He’s faster than people realise, while his vision and touch are sublime. Playing him with Ceballos ought to help us maintain possession and an attacking threat. Either of them alone will be easier to mark out of the game. He’s reportedly back in full training. Now would be a good time to show the player and the fans that he belongs here.

Up front, Aubameyang has to start. After that it is again, a tough call, but I’m going to put Lacazette on the bench and go with Pepe. It’s a gamble, but his speed and dribbling ability will give Liverpool something to worry about. Lacazette can always come on later, and as he tends to do, make a difference.

I had to think long and hard about the midfield, and I was tempted to go for a Guendouzi and Willock partnership to keep the higher mobility and dribbling. But I think Guendouzi tends to put himself under pressure when he’s not with a deeper player, Willock is too attacking, while Xhaka isn’t mobile enough. So I’ll hedge my bets and go for Torreira as a sort of middle ground, with Guendouzi next to him.

In defense, I almost went with Kolasinac owing to his superior speed and that we’ll need to deal with Salah and Mane running at us. But Monreal is the better defender and the better technician. So he still starts. The rest stay the same. 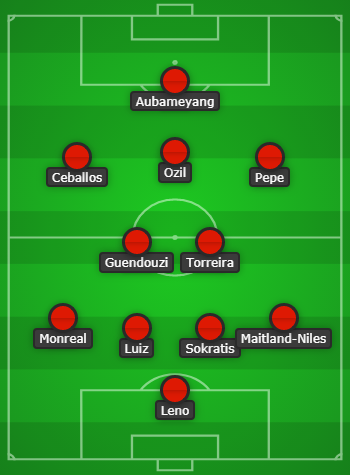 We’ve not really played well so far, but Liverpool haven’t exactly set the world alight either. The two remaining 100% winning records go head to head, in what should be an exciting, if nervous game of football for us. I’ll be looking for the players to step up to the challenge, and for the coach to stick to his guns and impose his philosophy on the game. Time to gauge ourselves against one of the best teams in the league. On their turf no less. We’ve done it before. It’s up for grabs. We have the talent. Let’s hope we make it count. COYG!

(Editor’s Note: This article was drafted prior to Emery’s pre-match press conference expressing doubts about the availability of Mesut Ozil due to lack of match fitness.)