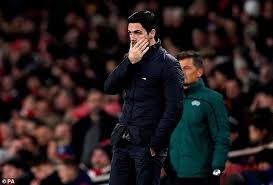 Mikel Arteta suffered many heartbreaks in his short Arsenal career as a player and last Thursday night he suffered his first as a manager. We can safely say, due to nature of the job, it won’t be his last.

But for us Gunners, it’s hard to remember a more shocking and disappointing loss than this in the modern era. The once mighty Arsenal was brought to its knees in front of their own home crowd by Greek champions in the Round of 32 of Europa League.

As far as the humiliation goes, it doesn’t get worse for a club of Arsenal’s stature. Just couple of seasons ago we used to be a regular name among the European elites but now can’t hold our own in the second rate cup competition of Europe. Don’t get me wrong, Olympiakos is a great club and, unlike us, came into Europa via the Champions League. But the conventional wisdom was they should have been brushed aside at Emirates especially when we had an away goal advantage and also went with our full strength team.

The match, itself, wasn’t of much importance in comparison to the end-result and what it means for our season. In time, no one will remember what transpired in the game. But the humiliation and the disappointment felt on the night will never be forgotten. For many, it will remain with us for the rest of our lives like a scar.

We are a fanbase who never liked us going out of the Round 16 of the Champions League. Now is the sudden realization we are not even worthy of Round of 16 of Europa League. It cuts deep, very deep.

Anger and frustration at players?

The frustration of this season, which already resulted in the sacking of Unai Emery, is now slowly turning it’s ugly head towards the players. It is the social media way and, like it or not, it is now the modern way to deal with disappointments.

Blame the players, demand the club to sell them or force players to demand a transfer-out like Granit Xhaka did. Make it all about blaming or defending certain players. After all everyone has their own opinion on social media and losing such a game only gives fuel to the fire.

I mean we Arsenal fans have been doing this for past decade. So, why stop now? We never cared for Arsene Wenger and we never cared for any young player coming through our ranks whenever he had a bad game. We are expert in making scapegoats out of players and managers alike. And we really only know of this way to deal with disappointment.

But this season is different. It is not the typical where Arsenal will start well, bring ourselves in contention for title only to drop like dead flies after the festive period. In the past we would crash out of almost every cup competition (except the FA cup) and, when all seems lost, rescue the season with last grasp run and make it into top 4.

Instead this season where we are reaping the fruits of some very bad executive decisions over the past 2-3 years. This is especially true of recent decisions on player transfers and managerial choices.

It is no coincidence that Arsenal are currently 9th in the table and crashed out of Europa League in this humiliating way.

The time has now come for us to look beyond our usual blame-type response to defeats like this and truly try to understand why this is all happening to us this season. Otherwise, this cycle will never stop and we will continue to sink deeper and deeper.

Before we go further, let’s get one thing clear, Arsenal did not lose because someone underperformed or didn’t play well. We lost as a team and hence must analyse the game beyond individuality.

20 or so months ago Unai Emery inherited a team that had a very good technical midfield with arguably the 2 best strikers in the league. The only issue was an ageing defense and team structure that leaked far too many goals.

It’s fair to say that, apart from an Europa League final, the Spaniard achieved very little. But he succeeded in destroying the technical foundation of Arsenal’s beloved style of play developed over 20 years. And therein lies the key to our Olympiakos defeat and Arteta’s challenge of the job.

Arsenal was at home to Emirates with an away goal and everyone expected it to be a straight forward affair. But Olympiakos came to London with a plan. They knew that Arsenal has abundance of attacking talent who can kill you in their sleep if given space. But they also knew that Gunners have a midfield deficiency when it comes to playing against a low block. Our lack of creativity and imagination in final 3rd is miles apart from what it once was under the same lights.

Anyone who has watched Arsenal closely this season would have noticed if you give the Gunners the ball and drop deep and force them wide, our front players don’t show enough mobility nor composure to create something in tight areas.  Additionally with no direct threat coming from midfield in the shape of late runs into the box (Ramsey), the defending team can rest assured that they will easily have everything playing in front of them.

Olympiakos knew it and they executed it for 120 minutes.

It was perfect for Olympiakos and it was frustrating for Arsenal. To watch the same thing on loop for 120 mins is frustrating. After all, once upon our time our strength was playing against the low block. We knew we had enough creativity to battle it out and on most occasions we did.

The bottom line is, when Cisse headed Olympiakos ahead and level on the aggregate in the second half, we knew that the night was going to be a long one. Arsenal hardly looked like scoring. For a team that had 61% possession on the night, it’s telling. Arsenal was given a puzzle to solve by the Greeks and looked clueless in the face of it.

Lack of creativity and imagination

We didn’t have the creativity or the imagination needed to play against the tactics of Olympiakos. The Greeks came and controlled everything in the way they wanted to do. They controlled the tempo and slowly sucked Arsenal into it. We were rarely able to enjoy the freedom of space or the opportunity to move ball quicker and with pace. The only time we did manage to do it, in my opinion the game should have been decided. But when two Olympiakos defenders combined to bring Pepe down, the referee only saw it as a yellow card offence. According to which rule book? I don’t know.

Young in his managerial career, the night was a telling test of Arteta’s credentials and it is fair to say that he came short. His reactions to the game came late and when they did it created more problems than solutions. His substitutions didn’t work and especially his decision to take Bellerin out for Willock changing the shape to a back-3. It was confusing, to say the least, as it did little to help our major issue, which was the lack of movement in behind.

As the game moved into the extra time, Arteta finally decided to make the change that was needed by bringing on Martinelli for the ineffective Lacazette. It worked a treat as his movement caused trouble to the Greek defence and provided Arsenal a chance to get closer to the goal. It was Martinelli’s glancing header, as he contested with the defenders for a cross from Ozil, which created the chance. When it finally came to Aubameyang he expertly and acrobatically put Arsenal ahead in the tie with an overhead kick.

The huge player and fan celebration said it all; the Gunners were set on their way to a great escape. Only for Leno to hesitate on the ball and provide Olympiakos with a corner in closing minutes and they did the rest.

With Arsenal shocked and looking at a possible early exit out of Europe, destiny was to provide Aubameyang with one last chance to be the hero, only for him to do a Van Persie and somehow miss from a point-blank position to score. Maybe he is too good for Arsenal but just like his missed penalty against Spurs last season, he only has himself to blame.

Arsenal crashed out of Europa League but it was a lesson to learn for Mikel Arteta. He has a squad that currently is not capable of playing his style and the manner of defeat on Thursday night proves it. His players must support the structure of the team but too many of them went out chasing glory against Olympiakos. The result is being knocked out of  our best chance of getting back to the Champions League. It may yet prove a blessing in disguise for our League run but who knows.

Arteta is young and prone to errors but we have seen enough of him to believe in him and to know he is the right man for the job. But one thing is certain, he must rebuild this squad in the image of Arsenal football and that means having more technical sounded players with the right mixture of intelligence and physicality, unlike the ones we brought under the current regime. Once we used to have an abundance of intelligent players, now we spend 72 million on players who know how to dribble but don’t have the intelligence to know when to release the ball or hold it. This is Arteta’s biggest challenge.