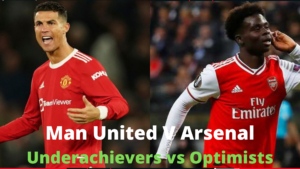 To Old Trafford to play the old enemy. Both clubs aren’t where most of us believe they ought to be and that makes it an intriguing battle.

I would urge caution though as I still feel we’re underperforming and even our results are not spectacular. In fact, when compared to last season, we’re still 3 points (and 7 goals scored) worse off in the same fixtures. Still, confidence is a wonderful thing and for the most part the players have good reason to be so. Just as long as we can keep improving, there really can’t be much to complain about.

Speaking of complaints, Cristiano Ronaldo didn’t like the fact that Messi won his 7th Balon D’Or. I suppose it makes for good theatre, but the only relevance I feel it has is that the 36 year-old Portuguese might want to take out his frustrations on us. He’s clearly no longer the player he was, but his killer instinct remains intact. Ramsdale’s jibe about wanting to face him at his best will probably egg him on further. Is that fear I feel? Probably. But not so much about Ronaldo as about our approach.

I will say we are generally ok in defending on transitions these days. I’m not entirely convinced we’re a great defensive team. In fact I’m sure we’re not. But my real concern is our attack. Aubameyang it seems is no longer a fan favorite but I bear no grudge against him for his misses. He is that sort of player. But give him enough chances and he’s a 30 goal a season striker. Even if he’s aging, I believe he’s still got much more a threat than we’re allowing him to pose. After all, he gets praised for bringing energy to his defensive game more than scoring.

Martinelli’s finish was at the opposite end of the spectrum as Auba’s miss and that’s led to people remembering he’s still alive and now they want him to start. Arteta was clear as mud when he replied to a question about him, but it would be quite a statement to drop Auba. So much so that I don’t think Mikel will do it. Not sure he needs to either. But we need to start showing much more verve in our attack and not just aim for precision.

Challenge is great but the rewards are greater

A victory away at ManU is a rare thing but will be much cherished. Of course we did win there last season but this will be a different challenge, especially with them preparing for a new manager to come in. He won’t be on the bench but Rangnick may well have an impact already.

A win sees us move ahead of West Ham and into the top 4. A draw will keep us in 5th, at least for now, while ManU, languishing in 10th and 5 points behind us will be looking to close that gap.

Really, any of 5 or 6 clubs behind the front 3 could imagine themselves with a chance of playing CL football next season. I hope we’re excited and up for the challenge and have the consistency and the quality to get there. Still a long way to go in the season but this busy schedule is where we could gain the advantage from playing fewer games than our rivals.

As I write this (apologies for the delay) I find myself more and more excited at the prospect of playing against ManU. Maybe it’s all the recent Wenger talk, or maybe something about both teams being in a sort of shoot-out (for the CL spots if not the title) but my blood is up for this rivalry.

Let’s go and win this. May the spirit of Wiltooooooooord guide us.