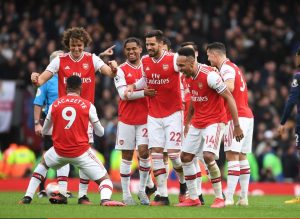 #ARSWHU: We are at that juncture in the season where results matter more than performance and that would be the perfect way to describe Arsenal’s victory over the Hammers this Saturday. For there was hardly anything worthy to write home about in terms of performance, but the importance of those 3 points cannot be described in simple words.

With games like Manchester City and Liverpool looming and Gunners already behind in the race for Top 5, these home games are “must-win” affairs for the London club to have any kind of chance of regaining the lost prize of Europe that they used to enjoy so often in the past.

When Arteta took over, Champions League seemed a distant thought but with fellow rivals faltering and City getting the ban, the impossible has become possible. This is not only surprising but also shocking considering that Gunners have broken all their worst-season records.

After our Europa League exit, this is Arsenal’s last hope to be among the European elite class. That is why one could feel the relief and satisfaction of a cup win when VAR decided to over-rule the linesman’s offside decision after Lacazette finished the chance presented to him on a plate by Mesut Ozil’s head.

For once, VAR did something good for us Gooners but why they took more than 3 minutes to decide a simple offside decision is a mystery that I will never be able to solve.

It was a proper smash and grab. West Ham should feel  hard done by as they were the ones who looked more threatening and more likely to score even though they only managed 30% of possession. They were more decisive than an Arsenal team who simply lacked cohesion for long periods and were guilty of selfish and slow tempo.

But West Ham, whose manager has never won an away game against Arsenal, had only themselves to blame as Antonio should have won the game for them. Early in the first half he was unable to square the ball into Haller’s path who would only have had keeper to beat from 5 yards out. It was a big let off after the Gunners high line was exposed wide open.  Otherwise the defence looked rather comfortable with the new addition Pablo Mari enjoying decent debut. The Hammers had struck the bar earlier in the opening 5 mins. They were again offered another glorious opportunity but only for Antonio to once again falter in front of goal.

On other hand, Arsenal did little of note. Their only chance came to the way of Sokratis who only managed to direct his header off the bar.

Aubameyang was hardly noticeable on the pitch.

Pepe continued his selfish heroics from the Olympiakos game doing more damage than good to Arsenal’s structure rather than West Ham’s. He is quickly becoming a headache. He is probably our best dribbler but his poor decision making on ball is killing our tempo and possession too much for the liking. This is obviously part of the reason why our front line looked so much out of sync and struggled to create, even though players like Ozil and Ceballos were having a great game.

Ceballos was perhaps the best outfield player on the pitch. He not only completed the most passes but had most interceptions and ball recoveries as well. And it was he who helped Gunners shift to another gear in second half.

That second stanza, Arsenal started exerting better pressure and forced West Ham to drop deep. Had it not been for former Gooner, Lukascz Fabianski, we should have reaped the rewards Nketiah was denied by the Poleafter some impressive play by Saka.

But despite their domination, Arsenal still needed Leno to keep them in the game. He did so by keeping none other than Antonio out, after a cross from left came superbly in his path. In many ways, Leno was the match winner as time and time again he showed good command of the box and dealt with everything that was thrown at him. When Arsenal finally took the lead, he once again was found to be an impeccable wall when he stood tall to Haller’s effort from 5 yards out.

With game closing to an end, West Ham kept pushing players up while Arteta decided to swap another defender for the impressive Ozil, who got a standing ovation from the crowd. This ensured a nervous ending to the game but the joy and relief was clear to see when referee Martin Atkinson decided to blow the whistle.

It was a perfect “1-0 to the Arsenal” who are now unbeaten in 8 league games, which is the longest current run in the championship. In doing so the Gunners kept another clean sheet. These are remarkable improvements under the stewardship of Mikel Arteta. But as the Gunners move 3 points off Top-5, even he knows that his real test starts now and it’s our last 10 games that will decide the fate of not only this season but the medium-to-long term future of the club.

Arsenal need one of their famous late season runs to finish in the Champions League spot and next up is a visit to Arteta’s former employer and playing against the master, Pep Guardiola. Can we truly say hope rekindled?