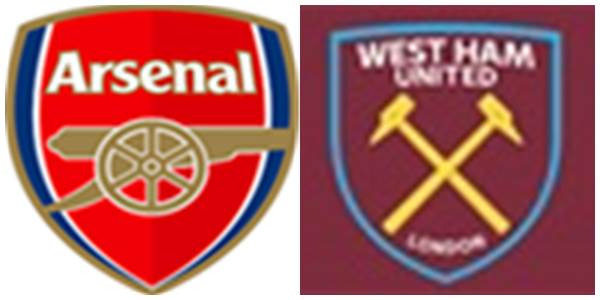 #ARSWHU: Arsenal host West Ham this Saturday with both teams desperate for points. While Arsenal, incredibly, are aiming for the top 4, West Ham need to avoid relegation. They sacked Pellegrini and appointed David Moyes in hopes of achieving that. It’s been a mixed bag so far. They’re only out of the relegation zone by Goal Difference. In 9 league matches under Moyes, West Ham have won just 2, including their last game against Southampton. They have, however, run some big sides close.

Mikel Arteta knows all about David Moyes, having played under him for many years at Everton. Even though Moyes has never won a league game against Arsenal, Arteta will not be taking this game for granted, especially because we have our own troubles. In the league we’ve won 2 in a row. We also beat Portsmouth and Mike Dean to get through to the Quarter Finals of the Forever Arsene Cup. But that extra time loss to Olympiakos still hurts. Not just for the result, nor even the manner of it. But also for the fall from grace it represents. If we do not qualify for the CL for a third straight season, the knock on effects are potentially huge. Arteta has been understated about it, but not reticent. He knows what it means.

Thankfully, despite starting the league with our shoelaces tied together by a clown masquerading as a coach, we are potentially in with a chance. Win on Saturday and we’ll be only 5 points off Chelsea in 4th with 10 matches to go. It will be a tight race, with ManYoo, Tottenham HotPoo, Mendes’ Wolves, and the team doing the Full Monty all in the mix. Even Everton and Crystal Palace are not that far behind us.

The Hammers have talent

West Ham may be languishing in 16th but they have ability in their squad. Of course Fabianski is familiar to us, as is Wilshere (sadly he still has injury issues). But Declan Rice, Pablo Fornals, Manuel Lanzini and Felipe Anderson are all good players. Their top scorer with 7 goals is Sebastian Haller, a player I have liked from his time in Germany. West Ham have created just 16 shots less than us, shoot at an all time league record in accuracy, 43% to our 35%, have created more big chances (37 to 35) and scored only 4 goals less than us (35 to our 39).

Keeping possession should not be an issue for us, as we’re playing at home and it is an area we have been steadily improving in since Arteta took over. But we’re too heavily reliant on Aubameyang to score goals. Hopefully he’ll be in good spirits. Arteta mentioned he was low after his late miss against Olympiakos, but he’s been in good spirits at training.

I’m going to look towards Mesut Ozil to be the prime creator we know he can be. This is the sort of game he should be able to create multiple chances so either Auba, or one of our other attackers can play themselves into form (Lacazette, I’m looking at you). But having said that, I have a feeling this is a game where Martinelli will make the difference.

Lucas Torreira was the latest victim in a long line of Arsenal players to have their ankle broken by a tag team of good, honest, English lads and lenient English referees. Of course mainstream media speak of it in the passive tone. “Torreira broke his ankle”. How clumsy of him!

Don’t expect any favors either from the referee doing this game, Martin Atkinson, who is widely seen as a Chelsea fan. I have given up keeping tabs on refs, but I know this guy isn’t to be trusted. Mark Noble and Declan Rice are also good English lads.

In more encouraging news, Tierney is back in full training, though he is not expected to start. Cedric will join training soon. Kola and Chambers are out.

I changed my mind about the starting lineup about 5 times. It’s always a difficult one to call.  It may be a good sign, suggesting we have some options now or an indicator of how I’m terrible at this. In either case, I hope Arsenal can smoke the Ham and feast well. We need all the goals, all the confidence, and of course, all the points we can get.

Arteta twice mentioned “club culture” in his pre match press conference. I’m sure he remembers the top 4 chases from his time at the club, and how despite some difficult times, we managed to get there in the end. It won’t be easy to replicate, but I believe Mikel is the right man to bring our club back to where it belongs. West Ham is another opportunity.