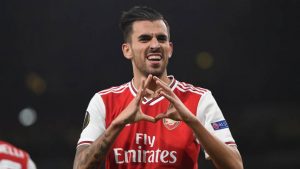 The transfer whores keep flogging a dead-horse. As they have done for every transfer window in the past 10-15 years, the usual suspects latched onto a transfer target and formed a consensus that this player is the magic bullet that will turn Arsenal into PL champions. I have no idea how these people eventually  start singing from the same hymn sheet but is noticeable they start echoing each other’s tweets and blog posts. “Follow fashion monkey”, is an old Caribbean proverb that comes to mind.

Anyway, this year the consensus among the transfer whores on Twitter and on my NewsNow feed is that Thomas Partey from Athletico Madrid is just the medicine the doctor ordered and it would be criminal negligence for the club not to sign him. Just to prove they have more than one prostitute to hawk around, more recently Houssem Aouar of Lyon has been thrown in the mix. Although he has never made the French national team, seemingly he is the creative genius just waiting for the opportunity to show-up Mesut Ozil as a slacker well past his sell-by date.

It is a repetitive pattern every transfer window. Last year it was Pepe and Zaha in the spotlight, the year before it was Torreira. I remember a time when year-in, year-out Yann M’Vila was the talk-of-the town as the mythical DM beast that Wenger refused to sign. By the way, his career seems to be coming to an end and his latest stop is back in France at St. Etienne, having never ever been signed by one of Europe’s biggest clubs. So much for the hype he was the prettiest in the shop-window whom no big spender could do without.

Last week, after much uncertainty, Arsenal announced that Dani Ceballos was returning for a further one-year loan from Real Madrid. Yet the transfer whores continued to peddle rumors and speculation that Arsenal was still negotiating with Athletico to sign Partey. Did it strike these people that while Ceballos is nominally an attacking  midfielder yett in Arteta’s system has a somewhat defensive-role while Partey is a purely defensive-midfielder? What would Partey offer that Dani does not? In fact the Spaniard is more attack-minded and is allowed to break forward into the opponents third when the situation arises. Even if Partey has this ability in his locker, why re-sign Dani and then go out and spend big money on someone with a similar skill-set?

Speaking of money, where will Arsenal find the mega-bucks Athletico will seek for one of its marketable assets? This is a club that sold Antoine Griezeman, David DeGea, Rodri and Kun Aguero, just to name a few, for blockbuster sums. Why wouldn’t they want the same big fees they obtained from English clubs like United and City who bought the latter three?

The harsh reality, which very few fans are willing to admit much less discuss, is that in the latest statements for fiscal year-ending May 2019 it showed Arsenal operated at a loss, i.e. (£32.2) million Given the disastrous impact of the Covid-19 lockdown on all PL clubs, Arsenal’s 2020 financials should be a horror show. Stadium revenue which is historically about 20% of total turnover was non-existent since early March’s suspension and the resumption of games in mid June. The losses in 2020 should be steeper by a greater order of magnitude

Yet some fans still flail around blaming the Kroenkes demanding they spend like the owners of Chelsea and City. But Kroenke operates Arsenal like a business, not a PR project like the sugar-daddy owners of those other clubs. Furthermore Arsenal is nowhere in the same league as Manchester United when it comes to commercial revenue that helps the Red Devils fund big transfers even as they must  regularly pay a lucrative dividend to the Glazer family.

Unlike the oilers of Abu Dhabi, the Kroenkes via Kroenke Sports and Entertainment (the parent company for their sporting and real estate assets) are also struggling for air. All major American professional sports have been in some form of lockdown and where competition has resumed it has been under restrictive conditions. The LA Rams, Denver Nuggets, Colorado Avalanche as well as Arsenal are just a few of the major “brands” or “franchises” the Kroenkes own. While Kroenke Sports & Entertainment (KSE) may be worth a massive $8.4 billion (Forbes magazine), making it the most valuable sports conglomerate in America, it is self-evident they are losing money during this corona-lockdown. Asset-rich, cash-poor comes to mind.

I have no data to back me up, but it is not unusual that in a corporate structure like KSE, if there is need for belt-tightening it will be applied across the board regardless of the specific circumstances facing a non-American entity like Arsenal. That would explain why 55 people were laid off within days of the FA cup victory.

Similarly I would not be surprised if, as part of the belt tightening, funds for transfers are severely limited.  Instead of expending transfer fees, the loaning of Ceballos would suit the Kroenkes just fine. Under that scenario there is no place for Partey or Aouar no matter how loud the transfer whores scream and caterwaul.

I may be wrong but I doubt it. Between now and October 5th the proof will be in the pudding.