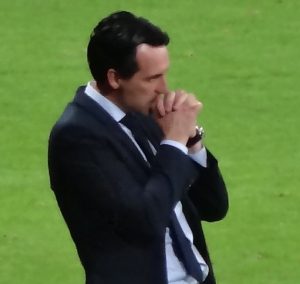 Arsenal had many issues under Arsene Wenger but playing good football, creating chances and dominating midfield of teams like Leicester were not among them. This Saturday, as Leicester romped to a 2-0 victory at the King Power Stadium, it felt like watching an Arsenal that still had all the weaknesses that it had under Arsene but had lost its strengths as well.

Many used to claim the sole vessel of problems at Arsenal was the legendary Wenger who they claimed had simply past his peak. No one ever said that the squad was the issue. The general perception was that any decent manager with modern tactical methods will be able to get Arsenal back to it’s glory with the current squad.

Emery has made Arsenal worse

But almost 15 months on and after spending in excess of 200 Million pounds under a supposedly modern manager, the fashionable view in and around the Emirates is Unai Emery has failed to improve Arsenal. But just like the fans were in wrong with regards to Wenger, they are wrong with regard to the Spaniard as well. Because, frankly, it is not that he has failed to improve us, rather he has successfully made us even worse. Tonight versus Leicester was further proof of that.

In his short Arsenal career Emery had shown a capacity to identify an issue and fix them through early substitutions. After a whole week of almost microscopic focus on his future one might have anticipated or hoped the same from him for Leicester but it was not to be. Everything that was written pre-match on this blog came true. Leicester dominated, Vardy scored, Maddison continued his brilliant form while the shadow grew darker on the Spaniard and the doubts grew larger.

Emery decided to go with a back 3 just like he did on so many occasions last season whenever he felt vulnerable. Sokratis was deservedly dropped as we saw the return of Bellerin and Holding to premier league football. Though it proved to be too early.

With a Torreira and Guendouzi partnership in middle it seemed to me from the very start that the Spaniard had already given away any hope of dominating the midfield. Instead choosing counter attacking football with the hope that his back 7 would be able to find Ozil in spaces for him to set Lacazette and Aubameyang free.

Initially Arsenal happily conceded possession and sat deep in their own half. The idea seemed to be to deprive Leicester of space in behind the defense which makes players like Vardy, Barnes and Maddison so dangerous. Though these tactics did achieve what it intended, the irony of once mighty Arsenal being reduced to playing such negative football against Leicester was not lost on anyone.

Leicester slowly found their way in the game and started created chances and would have felt unlucky to go at half time still level. Credit to Chambers for being aware in the box on more than one occasion keeping the score 0-0.

On the other hand, Arsenal, as was expected, struggled to get the ball to Ozil as the midfield got pushed back to effectively making it a back-7 and whenever we got the ball Torreira and Guendouzi showed little technical ability to get the ball forward. I lost the count of how many time Guendouzi just gave the ball away in our own half. This meant that our 2 strikers were hardly in the game. Even then we had enough quality we were able to create two decent chances.

In second half, Emery forced Lacazette and Aubameyang to go wide. This seemed a bizarre tactic but it did allow Ozil to get involved in the game more which resulted in more open game and allowing Arsenal to enjoy their best phase of the night. But even then we never looked threatening.

Our midfield had a lot to do with it. Offensively it offered little but defensively it showed little to no awareness of positioning as well. Especially when Ndidi found himself unmarked and in acres of space on the edge of the box only for his effort to deflect off the crossbar.

At the hour mark, Gray replaced Perez and with that, Brendan Rodgers pulled the magic trick out from under his hat. His direct running brought energy to Foxes midfield and they sprung into life, Pereira, Tielemans and Barnes combined beautifully in almost Wengerball fashion at the edge of the box to find Vardy who finished it neatly past Leno in 68th minute.

For Arsenal, the contest was finished right there. With the failure of their plan A, there seemed like a little urgency both from the manager and the players to change the course and it seemed like almost everyone knew what was coming. Another clever interchange saw Vardy feed Maddison who, at the edge of the box, drilled one low and hard to Leno’s right to double the Foxes lead.

Getting sacked in the morning

“You are getting sacked in the morning” chants erupted in the stadium while Emery tried to throw attacking changes in the match but the game had already been sealed and it almost felt like his own Arsenal career went with it.

Recently we have seen Emery go defensive in his press conferences and once again in today’s post-match he demanded more time and patience from the fans after yet another horror show. It’s a version of Spaniard we have rarely seen before. Only yesterday, he came out attacking and claiming that he has made Arsenal more competitive. But the aggression is less frequent these days. The tide has truly turned.

We can try to dress it up in as many ways as possible but the bottom line is that Emery is an appointment made wrong and following this defeat Arsenal have registered their worst start to a league campaign since 82-83 season and sit 9 points behind 4th place even though we are still in November.

We find ourselves closer to relegation than we are to champions league and there is a an air of frustration around the club. Our manager seems incapable of not only handling the squad but also the expectations that come with the job. We are playing like a mid-table team even though we have arguably the 3rd best squad in whole England. And the idea that Leicester does not have better squad but only a better manager doesn’t stick well either.

We are a club in crisis and in every crisis fans need something to hold on to. Under Arsene, we had his legendary status, his philosophy of football build on Arsenal values and the unwavering belief in his managerial qualities. The question is what do we have to hold on to under Unai Emery?