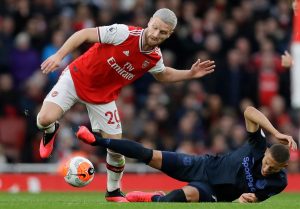 This is the Arsenal that dominates it’s opponent, plays a beautiful brand of football, scores some great team goals, puts out solid individual performances but still has the capability to keep the opponent in the game through the most silly individual mistakes imaginable.

This is the Arsenal that not only entertains and thrills the Emirates crowd, but still finds a way to leave us all with jot to behold at the end.

This is the Arsenal that we lost somewhere between the departure of the eminent Arsene Wenger and a certain Spanish Rioch’s anti-Arsenal philosophy.

Statistically, Everton battered Arsenal but it would be fair to say that statistics doesn’t tell the whole story. Arsenal always looked the better of the two and could have easily scored more than 3. On the other hand, Everton produced several chances of their own and had it not been for Calvert-Lewin’s profligacy and Bernd Leno’s heroics, the result may have been different on the night.

But a game that ended so brilliantly for Arsenal, didn’t begin in that fashion, Inside the opening minute, the Gunners found themselves behind through a set piece goal from Calvert-Lewin. The number of mistakes Arsenal committed in that little sequence of play are too many to count. But perhaps none more than Kolasinac’s.  He was making his comeback after a long absence and for the 18 minutes that he was on the pitch looked to have been brought back way too early. His evening ended pre-maturely after picking-up a shoulder injury.

Saka replaced the Bosnian and from that moment on Arsenal never looked back. They started dominating and pushed Everton back before eventually reaping the rewards.  The youngster got a run in behind the defence and produced the most perfect cross imaginable for the on-rushing Nketiah to tuck in his first PL goal of the season. Our new central striker grows in strength with every passing minute on the pitch.

Arsenal were level and moments later they were ahead when, Aubameyang, after threatening earlier-on was finally able to take advantage of Toffees high defensive line and convert David Luiz’s delightful little through ball past Pickford to turn the Emirates crowd on its head.

Unlike the early stages, when they looked confused and unable to find passes in midfield, Arsenal started running all over Everton. It was beginning to look like the Gunners would run away with it but, once again, they were to fall to their own moment of silliness. After failing to clear another set piece situation, the ball somehow pinged it’s way under the legs of the diving Leno at the 50th minute mark,  as injury time was added to the first half. Should it have been ruled out for high boot? Perhaps, maybe.

The parity between both clubs only lasted a few moments as, within 49 seconds of the start of second half, Arsenal went ahead when Pepe found Aubameyang in the box with a cross and he did the rest. This puts him level with Vardy as the highest league goal scorer this season.

Hanging-on to victory in the end

As soon as Arsenal snatched the lead, just as they did in first half, they went passive and lost the urgency. It may be attributed to the fact  they felt comfortable in lead or that they just started to lose physicality after midweek tussle against Olympiakos. But one way or the other, Everton started to get a little hold of the midfield and create chances.

The returning Andre Gomes played his part as well. After his introduction Everton improved massively and Ancelloti would feel that his side should have crawled its way back into the game.

First, Calvert-Lewin was denied by Leno from 5 yards out. Then it was the turn of Richarlison to be denied by the German wall in the form of Mustafi. Finally, in the dying minutes Lewin once again was presented with a golden opportunity but only see his header go agonizingly wide of the post.

Everton had their own share luck as well. Not least of which was Nketiah’s rasping effort that bounced off the post.

At the end, while few would argue that the Gunners didn’t deserve their 3 points, Everton may well think they deserved something out the game.

For Arsenal these are the kind of games they need to win, no matter how much effort it takes.

Hope is alive and well among Gooners for a top-6 finish. As long as that is the case, Arteta and Emirates have something to fight for as we face the business end of the season.