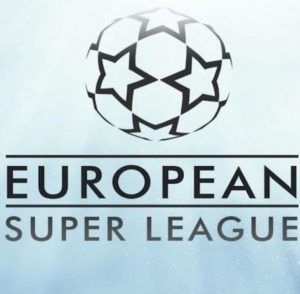 Ever since the announcement of the European Super League last Sunday it was my intent to write a blog explaining why I thought it was a negative development for the sport in general and English football in particular. For the record, I already stated this position in the latest Positively Uncensored Arsenal podcast. On the other hand  my good friend Blackburn George, @arseblagger, is on the opposite side of the fence. Happily we respectfully disagreed and left it to time to prove or disprove our respective points of view.

But never in my wildest imagination did I expect that the plans of the American billionaires to create their own private league of the biggest clubs in Europe would have collapsed in utter failure within three days. The news that all the founding English clubs (Manchester City, Chelsea, Arsenal, Manchester United, Liverpool and Tottenham) have pulled out of the project, after making profuse apologies to their fans, means the Super League is dead on arrival. This is despite the $3.2 Billion financing the Americans had lined up from one of the largest and most predatory banks in the world, JPMorgan-Chase as well as the massive PR campaign they unleashed from both sides of the Atlantic to convince English fans that they were the knights in shining armor to save football from UEFA and FIFA.

In my opinion the billionaires made a major miscalculation and so did many football fans who fell for their propaganda. They underestimated the sheer financial and political power of the English Premier League and UEFA to thwart the hidden objective of the Super League money-men to eventually destroy and overtake the two very lucrative leagues both have nurtured and developed over the past 20 years.

The Premier League, for instance, has the largest domestic TV deal in the world worth £5bn or $6.96bn for three years covering 2019-2022 broadcasting 200 live matches per season. Consider for a moment that, in 1999, the first ever tv deal with Sky was for £191.5million or $265.95million, which at the time was considered exorbitant.

Clearly the PL is the “big kahuna” by far. No wonder six (6) Premier League teams were initially incorporated into the project, two of whom have no chance of qualifying for next season’s champion’s league, i.e. Arsenal and Spurs (meaning on merit, they don’t deserve to be in the top European competition). By dragooning these six clubs into the Super League, it was clearly a shot aimed below the waterline of the EPL. Stripped of it’s the top-top teams, who generate the lion’s share of the tv audience domestically and internationally, there would be no product to sell after 2022. Once this major revenue source was diverted to the Super League, the tenuous financial lifeline that the EPL offers to all 92 clubs in the Football League, via solidarity and other payments trickling down the football pyramid, would cease to exist. It amazes me that so many Arsenal fans could only see the dubious financial possibilities the SL may offer our club and ignore the certain destruction of league football which is the foundation of the game in England.

Super League was supposed to save football

While the Super League mouthpiece Florentino Perez was making soothing statements that the European Super League will “save football at this critical moment” the Premier League was not impressed and pulled out all its major assets to stir opposition to the plan which they recognize would eventually put them out of business.

Sky, BT and other English broadcasters came out in hostile opposition to the SL. These guys have made a pretty penny broadcasting EPL matches domestically and internationally. When it comes to money and power they are not stupid. It is well known the EPL is the anchor to all the programming and advertising on commercial English TV. Without the EPL they will be on life support. Furthermore with the SL being an European competition, English broadcasters would be up up against a whole host of non-English cmpetitorrs. In this scenario the American billionaires will make short shrift of them just as they have done to NBC, CBS, ABC and Fox when it comes to all major sports leagues in America. These same billionaires have economic and political interest in helping Amazon, Facebook and other potential streaming services to succeed at the expense of their competitors.

Similarly the English print media, who have long enjoyed a cozy relationship with the EPL, easily took the side of their benefactors. Clearly the American billionaires will have to do a better job of capturing the English press before they make another run at the EPL. Rupert Murdoch’s ownership of The Sun and The Times is not sufficient. But then he is an Australian with US citizenship; one wonders where his true loyalties lie.

It is also interesting to see how the EPL was able to leverage their influence over the FA to openly express hostility to the SL. Recall that while the FA endorses the EPL it has no administrative control over their activity. Yet the FA was able to warn off players that their national team selection could be jeopardized if they participate in the SL. The various FAs and federations have the backing of FIFA whose governance of international football is unchallenged. Given that for centuries top players seek the prestige of playing for their national teams the FA’s threat was potent. I remember 45 years ago when Kerry Packer, an Australian millionaire, tried to privatize international cricket by creating teams on a national basis he was stymied by domestic and international cricket authorities cooperating to ban those players from representing their countries. Many national authorities put out weakened teams to great derision but those players to their dying day can call themselves internationals. It was the great desire of these hired guns to resume playing international cricket that was one of the reason why the Packer project failed. I see parallels with the response of FA and UEFA to the American billionaires.

This blog has gone on much longer that I wished yet I haven’t touched on UEFA and their vigorous opposition to Super League which represented a direct threat to their Champion’s League, the premier club competition in the world. Revenues generated by the UCL in 2005/06 was €607 million and by 2018/19 it had more than quadrupled to €2,816 million. With so much at stake it is incredulous to me that the American billionaires felt they could simply steam roll UEFA and steal their lunch. Again we are speaking of an organization with enormous economic and political power who have spent years preparing for a Super League “winning friends and influencing people” by distributing some of the revenue via the Europa and Nations Leagues. Most of their members are sharing in the loot. Why would they allow a small bunch of American billionaires to monopolize the revenues via a privately owned league? At least they have a vote in UEFA.

This embarrassing failure of the American billionaires to takeover European football, I predict, will quickly disappear from the news cycle. The English media, which is also owned by a small clique of multi-millionaires, have no interest in perpetuating this story and letting fans draw the right lessons which is to unite to improve football governance in England. When I see the increasing billions in revenue generated by the EPL over the years, it is clear to me that money is not the problem in the Premier League. To the contrary money generated is simply wasted and misspent. Take Arsenal for example, at least £300 million has been spent on new players since Wenger was eased out. Yet all the club can show is mid-table mediocrity and a desperation to win the Europa to get back to the Champions League. Meanwhile over the same period Leeds has spent just over £50 million on new players mainly from League One and the Championship and they are playing superior football under Bielsa. Go figure!