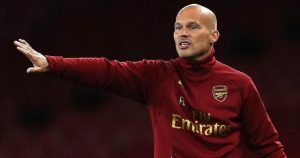 The battle between Everton and Arsenal, two clubs in crisis, always had a lot riding on it but the stakes went a lot higher when both clubs decided to hire new managers before the game and both were going to watch from the stands and officially take charge this Sunday.

Arsenal brought back their former club captain and hero Mikel Arteta who had left with a promise to return back home whereas Everton went and threw money on the biggest name they could find in the market, in the corpulent shape of Carlo Ancelloti.

One could argue that in the midst of all of this, the game was a foregone conclusion but it was always going to be a trial day for players as well as for the departing caretaker managers, with both having uncertain futures under new management.

It is fair to say, that both teams failed to deliver anything noteworthy for those sitting in the directors box as they delivered a 0-0 match of low in quality and high in mistakes.

Where Big Dunc went with the usual suspects, Freddie turned towards the youth with whom he has worked the most and perhaps trusts the most.

For Freddie, the key idea was to show more energy, effort and willingness to run and fight for the points in a very loud Goodison Park. But as the first half showed, maybe what Arsenal should have concentrated on most is how to technically control the midfield in order to pin Toffee’s back and lay the foundation for our victory.

The game started with good energy and tempo but neither team showed either technical ability in the final 3rd or the intelligence on the ball required to make a difference. Arsenal, after trying and failing to play through midfield early on gave up the idea completely, started mostly relying on long balls out wide to either relieve pressure or try to spring an attack forward in desperation.

Smith Rowe, making his debut, showed that Arsenal issues lie way beyond personalities, as he too struggled in a No 10 role. Just like Ozil against City, the Arsenal midfield failed to sufficiently bring ESR into the game and when they did, his first touch was never perfect enough to make anything out of it.

In the first half, Everton dominated and had few chances as well but failed to test Leno on a single occasion. On the other hand, Gunners had to wait till the end of the half to register their first shot of any kind when Martinelli sent his shot wide after given a free run on the keeper.

Second half was marginally better and as the Toffee’s continued to threaten from the left wing through Richarlison, Arsenal also started to threaten Pickford a bit as Xhaka became dominant which allowed Saka to be more in attacking phase rather than defensive.

Arsenal pressure resulted in couple of corners and through one, Freddie would feel that Arsenal should have sealed the deal when Auba, left unmarked on the far post was unable to beat Pickford from 5 yards out.

Moment later, Torreira driving forward tried to play ESR on the edge of the box but for some reason Aubameyang felt he had better opportunity there and hence took the shot off him only to fluff it.

Soon ESR was withdrawn for Willock. It was strange decision because ESR had started to get involved in the game more and would have felt that his day was ended prematurely by his manager. Maybe Freddie just wanted a bit more energy, running and tackling on this occasion as well.

Anyways, Everton best moment of day perhaps came when, after a good passage of play, Calvert-Lewin found the goal at his mercy of only for his shot to be blocked and then pinged away. It could have gone anywhere but it went for the corner.

Even though Arsenal started nervously in defense, the gunners became very comfortable defending Everton as the game went on. Calum Chambers produced yet another brilliant performance as CB and on occasions even made David Luiz look like a decent partner. But even then you need a bit of luck when you are down and Arsenal did have a share of it.

With nothing much happening, it seemed both managers were happy to get a point out of it. But there was cause for some frustration.

Arsenal fans would feel that Everton was so poor on the day that the game was there to be won and Freddie had the resources to win it as well. That he didn’t was just bizarre.

First he decided to bring Lacazette on but in place of Aubameyang. Then decided not to involve Pepe and instead keep Nelson on who frankly didn’t have a single highlight moment all game.

In the end, where Ferguson’s Everton era finished unbeaten, Freddie’s finished in the same way as Unai Emery’s with disjointed performances and bizarre decisions. Arteta was sitting in the stands drinking it all in and one can only wonder what he felt about the performance of the team and that of Freddie himself with whom he is scheduled a chat to decide his future role at Arsenal. But one thing was sure, he saw a performance that was 180 degree opposite to his own philosophy that he described so clearly in his press conference.

Perhaps, I am just being too harsh on Freddie because his football ideas on day was not something I associate with Arsenal. He was asked to do a job in poor circumstances with little to no help in terms of staff and he did as best as he could and for that we will always be thankful to him. Freddie has a lot to give to Arsenal and for that I hope we see him as the right-hand man of Mikel Arteta going forward.