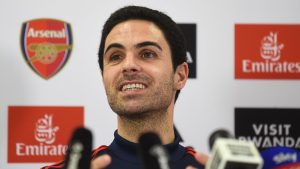 After this January transfer window, I think am one of the happiest Arsenal fans anywhere in the world. When I think of the moves Arteta has made I am bursting with the whistling, acoustic, melody of the late, great Bobby McFerrin:

Here is a little song I wrote

You might want to sing it note for note

In every life we have some trouble

When you worry you make it double

Why shouldn’t I be when it is becoming clearer every day the club escaped by the skin of its teeth the torments of Unai Emery. Imagine, using the opportunity of a recent newspaper interview in Spain, to blame Arsenal fans for his demise at the club. The very fans who spent more than a year wanting him to succeed, hardly ever criticizing him for his inconsistent tactics, team selection and piss poor results towards the end of 2018-19, as Arsenal lost its once solid grip on the top-4.

Instead of being grateful for this unmerited show of patience, he is seething with anger:

“The fans focused on me and they threw me out.”

Thank heavens by October 2019 the majority of Gooners had seen and heard enough of Emery’s bullshit making it impossible for him to be retained.

Proud as a peacock

But that was only the appetizer. I am strutting around, proud as a peacock because every day since his appointment Mikel Arteta is proving he is the man for the job. From the minute he assumed the office and his introduction to the public via his first press conference, we have witnessed a man who knows his destiny is to be a leader of Arsenal football Club:

“I’ve been back home. I’m extremely happy and proud to have been given the opportunity to be the manager of this football club. I’ve been preparing for a few years for this challenge to come.

“I know the expectations, I know the level and I know the stature of this club, and what it deserves. So I’m ready for that challenge, I can’t wait to start working with the players, and everybody here at the club.”

Now in this first ever transfer window Artea has proven he has a clear idea what players are needed to rebuild this club and he is getting them. He is making the choices, not Don Raul, not Edu, even if he must seek and get the concurrence of both.

In yesterday’s blog I provided a quotation from Pablo Mari who disclosed that Arteta was critical to the decision by the club to sign him and that he personally was motivated by Mikel to make the move. I concluded Ateta was choosing his own players.

I was fully vindicated in today’s presser, when Arteta confirmed that Mari is part of his vision of the way he wants the club to play:

“He balances what I want to do from the back line, he gives more options, more solutions, he opens up the pitch more. Again, he’s a player that we’ve been following for the last few months. We are really happy to have him.”

Who else could have been following him with the intent of signing him? Emery? Don Raul?

Fool yourself if you wish.

Not only that, it is clear to me Mikel is fully aware of the deficiencies in the playing personnel after the reign of Emery. Despite the limitations in finances (exacerbated by spending next year’s transfer budget on one player) he is trying to strengthen where possible.

“We’ve been trying to be active in the market to resolve some of the issues we’ve been going through in the last few weeks. We found two players that we believe can be very useful and improve our squad, obviously with the resources we had as a club. We are happy with what we’ve done.”

Arteta’s moves did not stop at Mari. After publicly bemoaning the absence of genuine full backs at the club following injuries to Tierney, Kolasinanc and Bellerin, Cedric is being signed. (BTW In many of our podcasts Blackburn George remarked how Don Raul had left the club high and dry by selling Monreal when he could still do a job.) Mikel explained why Cedric was signed:

“He’s a player who’s got a big experience,” he said. “He’s played in different countries, he’s played in this league, he knows what it means. He’s very willing to go to another top club and he’s got that desire, that commitment.

“I followed him a few seasons ago, I started to follow him and I really like what he can bring. They were the right conditions for us as well to try to improve the squad.”

Once again we see the hand of Arteta pulling the strings. Mari said he is making the “big decisions”. Who remains in any doubt?

Another thing to be happy about is how these signings have made fools of the willfully blind and barmy idiots who think, either there is a large pot of cash the Kroenke’s refuse to spend or they can willy-nilly violate domestic fair play rules and invest external cash into the club.

Despite these limitations, Arteta has made moves in the traditionally difficult January window that none of the perennial malcontents can criticize. It is amusing to see how quiet they are because they know full well any opposition will condemn them to the fate of AFTV, easily isolated by fans as part of the problem and not the solution.

At last a manager with both the football vision and the balls to seek players who in his own judgment can improve the club, not the judgment of the agents who are seeking a fat commission at the club’s expense.

No wonder I am so happy. The future is bright Gooners. Arteta Knows!