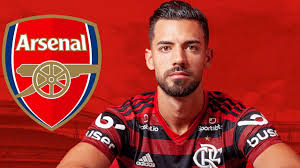 Like the vast majority of Arsenal fans, prior to the rumors online, I knew virtually nothing about Pablo Mari. Even after he signed for us, despite scouring the internet, the available information is sketchy.  A left-footed Spanish defender who was signed by Manchester City two years ago, sent out on loan twice to European clubs but hardly impressed before signing for Brazilian club Flamengo nearly a year ago. There he excelled as his former club won the national title and the South American club championship eventually losing to Liverpool in the FIFA world finals.

But that is hardly a convincing resume. There is no evidence top European clubs are rushing to Rio de Janeiro waving wads of cash at Flamengo to sign their players. Unless that club is Arsenal under new manager Mikel Arteta.

Mori is an Arteta signing

There is hardly any doubt that Mari is an Arteta signing. He would have been familiar with the player during his prior tenure as assistant manager at City. He is a modern defender in the Wenger-Guardiola mould; familiar with playing a high line, a good passer, comfortable with the ball at his feet and partial to playing it out from the back.

Mari himself confirmed that Arteta was critical to his signing in an interview published Arsenal.com:

“Mikel transmitted a lot of confidence to me. He’s a great coach and he’s changing things at a big club. It’s really important to have that personality to be able take decisions at a big club during such a tricky time and I think that speaks volumes about Mikel.

“In terms of the system he uses on the pitch, I think he has very clear ideas which reflect my own vision of football. I want to work hard every day and every weekend to repay Mikel’s confidence in me.”

That quote speaks volumes. Mari has highlighted that Arteta is “transforming” the club. He didn’t say it but I will. Arteta is a shining light after the disaster that was the Unai Emery era over the prior 18 months. During that period we literally witnessed the draining of confidence from the Arsenal squad week-in, week-out as the Arsenal Way of playing possession football and imposing its passing game on the opposition was coached out of the team to be replaced by “respect-ball.”

No wonder the club went on a 10-game winless streak over all competitions. The soul-destroying brand of football by Emery resulted in a mutiny by the fans, who began to stay away from the Emirates in droves as well as a surge in protests on social media. That must have been the signal to the owner(s) and the board that retaining Emery was not an option despite Don Raul persevering with him long past his sell-by date.

Mari’s admission that Arteta has made him confident he will succeed at Arsenal, unlike his time at City, is consistent with the evident surge in confidence at the club since he took over. The focus on “intensity and high standards” has resulted in better performances and although there hasn’t been a streak of wins but a spate of draws. As fans we take solace from that wonderful victory at home over United a month ago as well as the defiant refusal to lose to Chelsea over a week ago, when down to 10-men and falling behind twice.

The role of manager

But even more important Mari recognizes Arteta is changing the club. Just two years ago, the club and its media mouthpieces were successful in convincing many fans that the traditional manager wielded too much power and that the modern European management structure would be adopted. Conveniently this concurred with the anti-Wenger diatribes in his last two years, despite him arguably being the greatest ever manager of the club. By the time the Frenchman was through the door many of his responsibilities were split among at least three executives.  Emery, his successor, was simply the head coach and Raul Sanllehi became the most powerful football figure, almost solely responsible for the hiring and firing on the football side.

Seems to me much of the travesty of the Emery era should be put at the door of Don Raul. Sven “Diamond Eyes” Mislintat, former director of recruitment, all but blamed Emery for his quitting.  Raul is responsible for most of the big personnel decisions in the last 18-months including the decimation of the Arsenal central midfield and the decision to part ways with several senior players instead of retaining one or two key figures for a limited role during a transition period.

According to Mari, Arteta is making key decisions. One wonders how much truth is in the stories that initially Don Raul wanted to sign Kurzawaa from PSG, who was a busted flush since he moved to Paris, and that Arteta panned this move and instead favored the player he once coached at City.  If so, this signals that Arteta will not roll over and defer to a non-football man with a long list of agents on his contact list. It would signal that instead of simply being a head coach Arteta is becoming a manager who, if he is to be responsible for the cooking of the team, must be able to choose the ingredients. That is the mantra of most successful football managers.

With Don Raul’s position weakened by the Emery disaster, I for one am very happy that a football man with a modern vision, an unbreakable determination to succeed as demonstrated when he was a player and a visible commitment to the Arsenal-Way is willing to provide leadership of the club football-wise.

It makes for a very exciting future if Arteta flexes his muscles and succeeds in getting players like Mari, who shares his vision and ideas about the system on the pitch. For the sake of the club, I hope Mari not only talks the talk but walks the walk, just like Arteta did when he first joined the club in 2011.