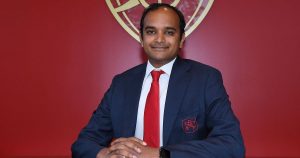 The main theme from the most recent podcast by me and Blackburn George is our skepticism about whether the sacking of Raul Sanllehi represents a real change in direction by Arsenal Football Club. The Arseblagger was his usual frank and outspoken self proclaiming “The King Is Dead, Long Live the King.” In other words, apart from a change in personality at the helm, it would be business as usual. On the other hand, yours truly was somewhat more optimistic, taking the view that the removal of Don Raul and his trail of dubious appointments and transfer dealings would give Mikel Arteta the freedom to rebuild and strengthen the club.

Am sure most fans are conflicted between the two viewpoints. I would go further and suggest that the majority of well-intentioned and right-minded Gooners are relieved that Sanllehi is gone and believe it is a positive change.

But have we given enough thought to the new man-in-charge, Vinai Venkatesham, whom the Kroenke’s announced last Saturday would as managing director “lead us going forward”? Frankly the signs are not very assuring if we go by his long interview with the dot.com on Sunday.

The biggest problem I have with Vinai is there is hardly any daylight between him and Don Raul. Throughout their joint tenure at the club, as the managing director he signed off on every major decision from the day the pair were presented to the public by Ivan Gazidis as his successor. Even in his acceptance speech aka the the interview, Vinai was at pains to stress the following:

We’ve been working side by side for the last two years and one of the reasons I’m so optimistic about the future is the fantastic work that Raul has done, really being a driving force in putting together the team of people that we have across our football operations that are going to help drive this club forward.

WTF. So the ousting of Mslintat as head of recruitment, the recent sacking of the veteran  head of international scouting (Cagigao) which had so much success in identifying players like Cesc and most recently Martinelli as well as the dismantling of the international scouting network is “fantastic work” and will “drive this club forward.” Pardon my French but this is a bunch of bullshit.

Clearly then, Vinai prefers the alternative which is the growing power special agents whose clients were able to secure lucrative contracts on very generous terms at great expense to the club. Look no further than the signing of Pepe, David Luiz, Cedric Soares and most recently Willian. More and more evidence has emerged post-Sanllehi that the cost and duration of these deals represent an onerous burden on the club. Should Arsenal not return to the champions league in the very short run  the financial consequences are too frightful to imagine.

Does this mean Vinai is on board with the on-going mismanagement of contracts and relationships with several key players that were signed during the latter Wenger years. The  pr and financial losses suffered because of the mismanagement of  contract negotiations with Ramsey and Koscielney come to mind. But the grandest of all is the current mishandling of the relationship with Ozil who, despite the post-COVID decision to not play him, had the highest number of assists of all Arsenal players. Is Vinai on board with the policy to drive Ozil out of the club as the player himself alluded? Does Vinai’s new Arsenal no longer believe in the sanctity of contracts?

Throughout the interview Vinai did his best to glad handle and assure fans that he shares in our goals and aspirations:

Our fans expect and our fans demand that this football club wins trophies and is at the top of the game both here in England, but also in Europe. So what fuels me is delivering on the expectations and delivering in regard to what our fans demand of us

Doesn’t this sounds like standard corporate spiel? We are all seasoned to the fact that today’s corporate leaders have a primary goal, above all else, which is to increase shareholder value. Last time I checked the managing director is beholden to Kroenke Sports and Entertainment company. Fan demands and expectations are only important to football executives  if they coincide with those of the 100% shareholders. Wenger was abused for emphasizing the minimum goal each season was qualifying for the champions league but Vinai wants to convince us we intend to compete for the Premier League title and to win the big-ear European trophy. If you believe that is the immediate target the Kroenkes set Vinai then I have a bridge to sell you.

Meanwhile Arsenal came 8th in the Premier League last season and got into the Europa League by the hair of its chinny-chin-chin. Mikel Arteta is going to need more than Vinai Venkatesham’s dubious assurances to lift the club higher in the table and to successfully negotiate the far-flung COVID-19 affected Europa League outposts.  I am going to wait until next season to see if much has changed. Meanwhile am not holding my breath.