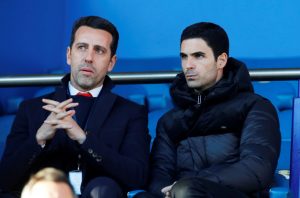 ShardGooner: It wasn’t long ago that I was complaining about Arsenal taking yet another new direction, and here we are again. Except, this time I’m actually pleased about it. I’ve made no secret of my dislike for Raul Sanllehi being in charge, and of my displeasure with how he ran things. That he is no longer at the club is a matter of much joy for me. The club has taken to denying that there was any ‘investigation’ into the Pepe transfer, and I’d guess that’s technically true. The problems were much larger than that, and so might be any wrongdoing. In any case, the club have sought to draw a line under the whole affair and that’s probably for the best.

From a position of suspicion, now I can at least look forward with hope that the owners are, if nothing else, able to recognize problems and take action when necessary. New management at the club is hopefully more football and Arsenal oriented at heart. Per, Mikel and Edu, other allegiances notwithstanding, are all Arsenal men, and rumors linking a former player with a position on the board have also resurfaced. (I recommend Niall Quinn.)

On the commercial side, Vinai has been with us for 10 years, and while I am in no position to judge his competence, I get the feeling he does understand what the club is about. It may not be ideal, but it will have to do. Special word of thanks to Tim Lewis; lawyer, Arsenal fan, and smiter of Raul. Arsenal hero just for that, as far as I’m concerned.

Of course, what any of this doesn’t change is the fact that we’re still the Arsenal that asked its players to take a cut/deferral in pay, made 55 employees redundant regardless, and dismantled the majority of its scouting department. It is also the same ownership that decided to put Raul Sanllehi in charge. We are now a midtable club and have a large distance to make up to get back to the top. This is the reality we’re going to have to live with.

A plan is emerging

There does seem to be a plan emerging though. The signings of 3 players for the U23s in the 19-20 age range indicates a focus on signing low cost players who might be better than their current standing in the game indicates. 2 of them released from Huddersfield and Tottenham, identified by our analysts, and the other brought in from the Norwegian 2nd tier based on a scout’s recommendation. These moves represent something of a test for how good our analysts really are. After the restructure at youth level a few months ago, this is very much Per putting his stamp on the academy.

There is also a good batch of youngsters, already at the club from the previous administration, that are coming through. Some of them have been on the fringes of the first team, while others have been out on loan to aid their development. For the upcoming season Matt ‘more medals than Kane’ Smith, Zech Medley and Trae Coyle have already been sent out on loan. Others may follow. The new U23 signings will help fill the gaps they leave in the side.

Meanwhile the first team has definitely seen Edu starting to have an influence. David Luiz and Willian are clearly players he already had a relationship with (so does his agent) Young Brazilian defender Gabriel is supposed to be on his way from Lille to join them. Cagigao might have been responsible for recommending him, but Martinelli and Pablo Mari are players signed from the Brazilian market as well.

This is not a problem. After all, Wenger brought in many players from France when he first took over. Another thing Wenger was accused of doing in the early part of his reign was blocking the path of youth into the first team. So I am not worried about that aspect either. If our academy does its job well, players should be able to fight their way into the first team. If not, they should be sold on for a decent profit.

Too early to tell

The thing to focus on is that we build a squad which has the ability to play the way Arteta wants them to, is deep enough to rotate as required without much drop-off in quality, and is balanced in terms of age and wages. It is too early to tell if this will indeed be the case, but the rumours of Gabriel, Partey and even Aouar are encouraging, as is talk of a new contract for Aubameyang.

Signings aside however, it will come down to how we play. Whatever else may be in doubt, such as formations, selections and substitutions, I am confident Arteta wants to play the sort of game we’d be happy to embrace as the Arsenal way. As the player very much credited for bringing order to a club in chaos when he signed, Arteta also represents the sort of professionalism and commitment we expect, and he combines that with a will to win.

He spoke about the players needing to want even more after their FA Cup win, and my feeling is the squad is generally of the same mind. They endured Emery and managed to still keep going. Heroes all of them.

Back to the top

Arteta consistently speaks of getting the club back to the top, and says it with conviction. My controversial, optimistic, but also slightly emotional take is that we should aim to win the title in the next 2 seasons. It would match the longest run Arsenal have had without a league title since we first won it. 18 years is long enough. My targets would be top 4 for this season, and league title the next, and I want to see the club make moves with these objectives in mind.

That doesn’t mean we throw away money or our future to do it. Indeed, I think our young players will be the biggest asset in any title challenge if they can improve enough in this time. They have the right coach for it. If we manage to do it, maybe we’ll even get another Fever Pitch. I’ll certainly be screaming and shouting and crying tears of joy. If not, then at least we would have tried.

Still much to be wary about. Still cause for doubt. But now that the wheeler dealer on top has been removed, the man in charge of the football team gives me great hope we are headed in the right direction. Just as it was before. Just as it should be.