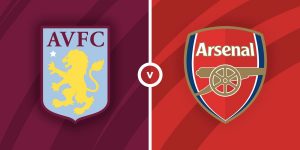 Like most Arsenal fans I was quite disappointed by our 1-nil defeat to Villa earlier this Saturday but was it much of a surprise. Not if we took even a cursory analysis of the league positions of both teams prior to the game.

Villa were 9th in the tables, one place ahead of Arsenal with two games in hand. More importantly they had a superior goal scoring record; 35 goals in 20 games at 1.75 gpm versus Arsenal’s 27 goals at 1.2 gpm. Defensively we can say we were both equally matched with Arsenal conceding 1.0 gpm versus Villa’s 1.1 gpm. Thus it was an offensively superior home team of comparable defensive strength.

Therefore when Arsenal conceded within 75 seconds of start, my biggest fear was conceding a second. So far this season Arsenal has demonstrated very little capacity to overcome a two-goal deficit as teams then sit deep and defend. The record is never winning a game after going one goal behind.

Unlike Arteta, I remember that long before social media, football players were abused and villainized in the stands and elsewhere especially after making howlers. Cedric is now getting his fair share on social media after a loose pass in the direction of Gabriel which was seized upon by Traore who flicked a left-footed cross to Watkins. The prolific Villa striker slammed it into the far corner courtesy of a slight deflection off Holding as Ryan’s first touch of the ball was to retrieve it from the back of the net.

Quite frankly I feel a lot of sympathy for poor old Cedric; 9 times out 10 this happens early in the game without fatal consequences but that was to be the winning goal. Like all pros he’s got to have a skin made of Teflon and rise above the abuse, some of which may impugn his national origin.

For the next 94 minutes or so Arsenal huffed and puffed but was never able to blow the Villa door down. As could be expected Villa defended deep, clogging the middle, inviting Arsenal to rely on crosses, similar to the tactic they successfully employed in the return fixture last November. They have very good defenders led by Tyrone Mings and at last resort can rely on excellent goal-keeping by former Arsenal-man, Emi Martinez who was primed and ready to face his old club.

What was annoying to us Arsenal fans was a policy of rotationally fouling Saka who they clearly identified as the danger. This brings me to the controversial 31st minute incident involving Konsa and Saka. Some fans have vocally accused referee Kavanagh  bottling it when he gave the Villa man only a yellow card for fouling saka on a break-away. My broadcaster did several replays and quite frankly I think we gooners may be crying wolf too loudly and may be discrediting our own just cause. Both players were grappling each other before the final tangle of legs of legs that brought Saka down. My standard question; would you want an Arsenal player red-carded in such a situation? Isn’t that the reason why we feel there was so much injustice in the red-card  shown to Luis versus Wolves?

Truth be told Arsenal started the second half brightly  and created several chances before it petered out, a pattern we often saw prior to the December revival. Willian for Partey did not trouble the scorers (for the non-cricketers this is a reference to the officials who record every action during a match). Odegaard had more about him technically and physically and is probably still ruing his 84th minute shot over the bar from 15-18 yards out with only the goalkeeper to beat.

In the end it was Villa doggedly hanging onto their early goal and occasionally counter-attacking, trying for the 2nd goal to put the game to bed. Arsenal futilely sought the equalizer. The Villans did the double over us for the 1st time in 38 years. Despite a valiant effort by the Gunners, I, for one, am disappointed but not really surprised by the end result.