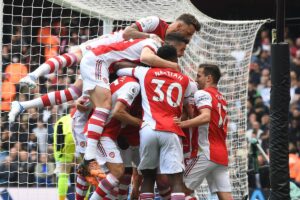 Two wins against top 4 and traditionally big rivals, up into 4th place, and ahead of Spurs, and the mood around the club is once again one of elation, or at least one of confidence. We’ve also been boosted by the return of our first choice right back. We’re scoring goals and playing some decent attacking football while at it. It may be a tradeoff with the defensive solidity, but it’s one well worth making.

While this upturn has coincided with the introduction of the soon to be ex-Arsenal player Nketiah to replace soon to be ex-Arsenal player Lacazette, the question is will this continue? Both Chelsea and ManU are tough opponents but for that reason, not exactly intent on sitting back, which leaves space for Eddie to exploit. Arteta will have to decide if the same set up will work with our next opponents, West Ham, or should he recall Lacazette to the starting lineup.

Apart from that, the only other decision he might have to make is whether Tomiyasu is fit enough to start, and whether it will be Martinelli or ESR again who starts. Whoever plays though will need to be aggressive and take advantage of West Ham’s midweek exploits in Europe. The fact that they had a narrow loss may be to our advantage as they, understandably, would be distracted by the chance to reach a European final.

David Moyes has done a good job at West Ham, and as Arteta’s former boss, I’m sure they will both have some insights into each others tactics and thinking. It does depend though on whether West Ham will also rotate their squad heavily so as to be fresh for the 2nd leg of the EL semi final. Arteta brushed the potential impact of this aside, and it is the correct approach. Even if they choose to play mostly youngsters, there is a chance of their enthusiasm latching on to any carelessness on our part.

Spurs are playing Leicester, also in a similar situation to West Ham and in European semi final, just before our game. So we will know their result. Once again, I hope a positive result for us does not lead to any lackadaisical attitude in our game. West Ham are struggling with injuries in defense, and we ought to test how they hold up under pressure. Frankfurt made them pay, although, we should note, they had more chances themselves to score.

However, our manager believes we have a much better environment at the club now, with greater unity and better execution. I’m happy to take him at his word here, but the players and the manager need to go out in this final month of the competition to prove it. We finished outside Europe for the first time in nearly 3 decades. It is also a season with our fewest games in around that same time frame. On opponents, we’re still only 6 points up. At the start of the season, I had hoped for a 10-point improvement which ought to be enough for a top 4 finish. If we match last season’s results, we’d end on 68 points. But with 5 games remaining, the lure of the CL and of St Totteringham’s Day, we probably should aim for more than that.

Of late we have embraced the chaos and allowed the players to express themselves with more freedom. I really hope that continues as we’ve looked more energetic and dangerous in the last couple of games. Also just more fun. Which is really what I feel this match could be like too.

We’re so close to getting back to where we ought to be, and there’s already a lot of talk of next season, including the future of Hector Bellerin (congratulations on winning the Spanish Cup) But it’ll all depend on where we end up. Let’s first of all make sure we end up on the winning side against the Hammers.

In the latest Positively-Uncensored podcast Blackburn George, @arseblagger, and Shotta, #shotta_gooner, discussed Shard’s “chaos theory,” a theme he introduced to to this blog weeks ago. That was one of several topics discussed as they conclude that Xhaka and Elneny are the keys to Arsenal winning at West Ham.