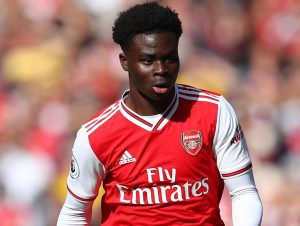 That was a HUGE result for Arsenal and for the interim coach, Freddie Ljungberg, in particular. Standard Liege was up 2-nil up at the 70th minute mark and Ljungberg’s Arsenal refuse to roll over and die and within a 6 minutes spell they came roaring back  to equalize. Freddie owes this result to his best student from the U23s, Bukayo Saka.

Let us not beat around the bush. Losing that game would have been a mini disaster for the Gunners.

It would have been a huge blow to the already fragile confidence of a team still trying to find its feet after the disastrous reign of Unai Emery, when for the first time in 42 years the club went 9 games without a win, being outshot and outplayed by far-less talented but certainly better-coached teams in England and Europe. Defeating West Ham 1-2 last Monday night was the first green shoots of recovery. Being in its infancy, this renewed confidence can easily be trampled and destroyed and that was certainly seemed likely at 2-nil. But as the “A” team did against Spurs and Villa earlier this season, the Europa league “B” team showed guts and resilience despite some wobbly spells.

Losing to Liege would have exponentially increased the chances of further instability in the coaching ranks of Arsenal as those who refuse to give Freddie-a-chance would have been in a stronger position to campaign for the early end to his tenure. After four games in-charge Freddie has had 1-Win, 2-Draws and 1-Loss to his name. In every game except Brighton, the team has managed to score at least two goals, higher than the season average of 1.5 goals per game. They are taking more shots, no longer being outshot by their opponents. Freddie has stabilized the ship, prevented the Titanic from taking in more water despite being given little or no resources; no staff and no time to coach as the matches come thick and fast. From Ornstein, the club’s unofficial mouthpiece, it is clear that Sanllehi wants it known to the world that the search for a new manager is active. Seems they are treating Ljungberg as a placeholder to be removed at the earliest opportunity regardless of how he performs. At this stage when the club is wallowing in mid-table, surely the emphasis should be on stability, if is to gradually dig itself out of the hole.

The club can ill afford losing the financial rewards of participating in Europe’s second tier completion. A victory in the group pays €570,000 and a draw €190,000. So far Arsenal has earned €2,090,000. The club will also earn €1,000,000 for winning the group. Reaching the knock-out stage quarter-finals and semi-finals will trigger additional bonuses as well. The losing finalists receive €4,500,000 and the champions receive €8,500,000. Europa League prize money may be peanuts to the Champions League given Liverpool made €101.1 million in prize money as runners-up in the 2017-18, but Arsenal can ill afford to lose further financial ground to its rivals in an age when financial power is critical to competitive success. It was only three years ago that Arsenal last qualified from the group stages of the Champions League for the umpteenth time and there were many fans who not only took it for granted but used it as a stick to beat up on the manager on the grounds that participating and not winning the competition was a failure, completely ignoring the financial benefit to the club of being on the biggest stage in Europe.

Poor match on a poor pitch

As for the football match itself, it was far from being a spectacle. Matters were not helped by the playing surface, showing patches of dirt interspersed with grass in several places. A cow pasture is a fitting description.

Ljungberg played his second XI, a large number of youth mixed with veterans who are in and out of the Premier League squad. Tactically he adopted a 3-4-2-1 formation with Lacazette leading the line supported by Reiss-Nelson and Smith-Rowe both tucked in with Saka and Maitland-Niles playing as overlapping wing-backs.

Liege according to the tv pundits play a 4-4-2 formation but from my observation it morphed into a 3-4-3 when they had possession, trying as much as possible to spread the field of play so they can attack the gaps in the Arsenal defense. It was clear from the outset they wanted to score goals and win, as they had a slim chance of qualifying for the next round if results elsewhere went in their favor.

The quality of football on show was poor. From the onset both sides could barely retain possession, rarely able to string a few passes together from back to front. Chances Arsenal granted the opposition were simply the result of passing or heading the ball straight to the opposition. The so-called veterans on show did not do their cause much good to say the least.

In contrast Bukayo Saka, playing a rather unusual wing-back position, grabbed the opportunity with both hands. Around the 17th minute mark, in what was to typify his night, he burst into the box and shot straight at the keeper from an acute angle forcing a save. In tandem with Reiss-Nelson and Willock they combined very well throughout the game creating chances repeatedly. In the first half alone Saka forced the keeper into three saves and 2 well driven shots went over the bar.

The second half began innocuously until the 47th minute when Bastien advanced the ball into the Arsenal penalty area and decided to have a pop. A deflection took it wide of keeper Martinez who was wrong footed as he initially went right to cover the shot. The goal seemed to have raised the confidence of the Belgians several notches. They began to exert great pressure and had a spate of corners in a 10 minute spell. In the 62nd minute Willock committed another of his turnovers and Amallah made turning cones of both Mavropanos and Guendouzi to get his strike off, low and hard to Martinez’s left.

The goal was to trigger a spirited fightback by the Gunners. In the 76th minute the overlapping Saka burst down the left hand side and made a perfect cross into the six-yard box, to be met by a firm header by Lacazette, who barely had to leave his feet as he scored. Two minutes later Saka exchanged passes with Martinelli at the edge of the box, continued his run inside and unleashed a right-footer that whizzed inside the post beyond the keeper.

Despite a frantic effort by Liege to get something out of the game in the last 10 minutes they were left exhausted and prostate on the ground at the end. In contrast the Arsenal team looked pleased but not over-exultant. Job done but several crucial battles ahead.