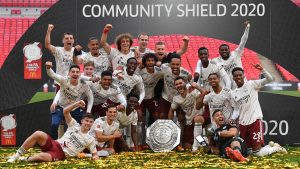 The strange position that the FA Community Shield occupies in football fans’ mind got even stranger this year. The traditional curtain raiser to the premier league season is now more than a pre-season game. I still believe it would be valued more were it called the Super Cup, but it was strange to see it played so early in pre-season. Some people were even suggesting it should have been cancelled this year. I’m glad it wasn’t.

FA Cup winners Arsenal went into the game as underdogs against the champions, Liverpool. The latter not only have the better squad and were missing fewer players, they were further ahead in their fitness work, having held a fitness camp. Arsenal’s starting XI felt somewhat patched together, like a team in limbo. Players missing, players rumoured to be on their way out starting, and a few incomings still in the works.

So it was no surprise that Liverpool started well. They constantly harried us, attacked the space, and even had the ball in the back of the net from a set play. It was thankfully, and correctly, chalked off for offside. It didn’t prove costly, but we were persistently vulnerable from set pieces. This is an issue from last season, and the club has brought in a set piece specialist coach to address it. We should get better as the season goes on.

Our defending in general is much better though. Robertson and Mane were a constant threat down their left, but for the most part Holding covered Mane well, and the defenders were well positioned to deal with the crosses. Liverpool were playing high up the pitch, and I thought we did well of dealing with not just their attack, but also their press. We mixed it up and played it long a few times, and of course there were times we just ended up kicking it out of play. But to see the confident buildup play right from our own box was encouraging and a lot of fun.

It also led to the goal. We passed it around the 4(!) Liverpool players pressing us in our box, found the space down the right for Saka who played a cross field ball for Aubameyang. Auba then cut inside and calmly curled it into the far corner. The Black Panther celebration in honour of Chadwick Boseman followed. It was a thing of beauty and the closest I’ve seen to Thierry Henry. Even Klopp nodded in appreciation at that finish.

This led to a spell where Arsenal could have scored a few more goals. Maybe should have. Nketiah won the ball in midfield and could have finished it with a goal only to have it saved. He also had a shot from outside the box that went wide. AMN found himself in the box and passed the ball when he should perhaps have shot.

Liverpool’s shots were all blocked by our midfield and defenders, while their crosses, though threatening, didn’t find their target. A well deserved 1-0 at halftime, despite Liverpool’s superior possession.

In the second half, AMN and Firmino traded long distance shots, either of which could have gone in. For once, Rob Holding was caught out by Mane, who went through on goal, but Martinez proved up to the task yet again. It seemed fairly comfortable for Arsenal until the famous Japanese gladiator Minamino came on and had maximum impact. Quick interchange between him and Salah, a couple of deflections, and a possible/likely handball found the goal at Minamino’s mercy and this time there were no heroics from an Arsenal GK. 1-1 and the game hung in the balance. Mane had another chance when Saka was guilty of losing the ball in our box, but once again Emi closed down the shot. That was about that, and the game went to penalties. Everyone but Liverpool’s Rhian Brewster scored their pens with Auba, fittingly, taking the last one to win us our first trophy of the season.

After the game he was asked about his contract, and although he wouldn’t be drawn on it he said this was an exciting time to play for Arsenal. Good vibes there. Also shoutout to Ainsley Maitland-Niles, who had a very good game on his birthday. Even coolly slotting home his penalty in the shootout. He sounds like he wants to stay, Arteta, sounds like he wants him to stay. Not sure why this rumor exists.

It’s too early to draw too many conclusions. Fitness, personnel, tactics; they could all change. But it was an encouraging start from Arsenal. Even Mohamed Elneny, widely considered to be surplus to requirements, had a good game against a very good Liverpool side. With all the upheavals possible in the squad, maybe he can find himself in the squad for the coming season. Holding was linked with a loan move to Newcastle. Martinez is still going to be in a battle with Leno. Healthy competition for places? Too many options in a unbalanced squad? Who knows with Arsenal right now. But I’m enjoying finding out.