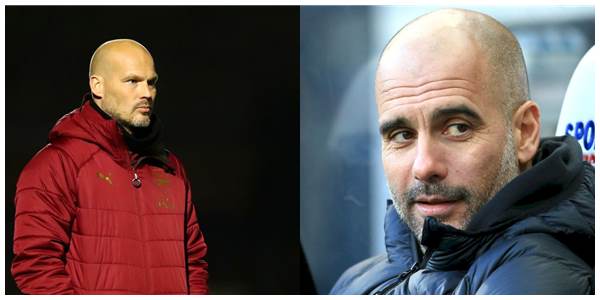 After a week in which Arsenal managed to grab a win and avoid a defeat, one can understand why there was a bit more optimism going into a game against the English champions not only from the players and the staff but also from those sitting in the stands of Emirates.

But what transpired on Sunday can only be described as the hollow and empty experience of playing football and getting a beating at the hands of superior and better managed Man City team as the full Emirates crowd watched as silently as possible as though everything was known before hand and not many bothered to do much rather than just turn out in numbers.

And by the time the hour mark was reached, the Emirates went half empty as everyone slowly understood the position this mighty club suddenly finds itself.  Dragged right back into the mess  just when we thought we saw a bit of ray of hope.

It is fair to say that the nature has not been kind on Arsenal as we lost both our fullbacks and Granit Xhaka in the build up to the game. The later turned out to be the most significant as Arsenal were forced to go with a pairing of Guendouzi and Torreira who even though show a lot of passion, desire and willingness to throw a foot in but lack the technical ability and the positional awareness required to either stamp their authority in midfield or provide enough defensive solidarity to see City out.

Arsenal’s best chance was always to attack City and for that they needed to have a kind of authority in midfield which on night our both midfielders failed to provide which not only resulted in making our offensive players inefficient but also made us vulnerable to counter attacks which City exploited perfectly as they romped to 3 goal lead inside the first half.

All three can be described by similar patterns. Arsenal tried to build slowly from the back, pass after pass and then when the time came to make something out of it in the opposition’s final third, they were either too slow or lacked any kind of imagination or the willingness to run in behind to cause Man City any kind of trouble.

During this phase, City would systematically foul in order to stop Arsenal or create a situation in which they can turnover possession and counter. And counter they did not one, not twice, but countless times in the same pattern over and over again and Arsenal had no answers.

With one pass City would cut open our midfield like a knife through butter and with De Bruyne on the ball and Sterling and Jesus bombing forward  in acres of free space, beyond our defense, they were in heaven. First De Bruyne blasted the open net after a neat work by Jesus on Arsenal’s right hand side and then Sterling did the same after De Bruyne put one on a plate.

On both occasion, Arsenal could have dealt with it better. Players could have been more tight in box and goals could have been avoided with better positional awareness and defending. But none was to be found and it looked like City would score every time they went close to our box. It seemed like everyone in the stadium including the Arsenal players expected it to turn out like that as well.

Arsenal tried to build sustain periods of possession in City’s half but to no avail and soon City killed any small hopes of Arsenal comeback. In a similar pattern as before, De Bruyne found himself on the edge of the box and curled a great low effort in the left bottom corner of the net. The Belgian had never scored a brace before for City and on night, had it not been for Leno, he could have had a hat trick as well.

From there on, fans slowly started leaving Emirates.

Freddie cut the figure of a manager who had accepted the result but still wanted to try to make an impact and hence, he took Ozil off. It appeared to me he was singling out the German when the whole team, frankly, was just not good enough. This became apparent when the substitution itself made little to no impact whatsoever.

The bottom line is that Arsenal were beaten in midfield, they were out possessed, out passed, out shot and on night there was no contest. Arsenal have had a lot of beating in recent years, but none came with such a toothless performance at home in the league as this was.

Arsenal remain 7 points off top 4 and the relegation zone and the club has never looked more directionless, ever. Arsenal need saving and it’s time that board gets their act together and clarify the situation regarding the manager and the direction in which they want to take this club otherwise we are in a mess and with each week we seem to pile deep underneath it.

Freddie can be much more to Arsenal Football Club then just being used as a shield to cover for board’s incapability to run a club of size of Arsenal.