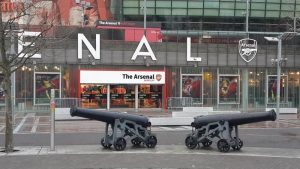 What direction for the canons of Arsenal?

It’s been more than 2 years since Arsene Wenger left Arsenal, and the club hasn’t felt settled for any length of time since. It’s all very confusing. Indeed when I was asked if I’d like to write something on our rumored transfer business, I had to consider if I could make any sense of what is going on. In short course, I had to rip it up because Arsenal, once again, decided to go in a new direction. How many new directions have we taken recently? Part of me suspects that the disarray is not an accident, nor even incompetence, but a calculated design meant to keep us all guessing and exhausted.

Take the latest statement for instance. There’s something very brazen about it. When the players were asked to take a pay cut, and Ozil made a scapegoat again, they told us it was meant to protect jobs of the other employees. Now they announce that 55 people are to be made redundant, link it to signings, imply that ownership restructuring debt is a contribution towards helping, and ignore how they’d presented the pay cuts earlier. That this comes just after the FA Cup triumph and just before some crowd pleasing transfers and contracts is a very transparent attempt to get Arsenal fans onside.

Thankfully, I see that Arsenal class, marketing slogan though it may be, is something the fans identify with. Even Ian Wright stepped in with David Rocastle’s quote “Remember who you are”. There are of course a few who will try to justify it because they bought in to the Don Raul meme very early. Maybe they can enlighten me as to what the strategy is. Because all I see is that an agency has put down roots at Arsenal.

From Wenger To Kia

When Wenger left we had a clear plan moving forward.

Then the CEO left, and we promoted the contracts guy to top dog. He pushed out the Head of recruitment, leaving us without anyone to play that role for months. In the meantime he oversaw the destruction of the core of the side that had been built. Agreed contracts were withdrawn, captains were vilified and pushed out, the centerpiece of the attack was made a lightning rod for all the ills of the club. All the while, the club was playing horrible football and missing out on the targets they had set. Players were unhappy. But there was an effort to offer the coach a longer contract. After all, he had only failed at the football aspect. He had otherwise proven a loyal company man.

Thankfully this didn’t happen, but subsequently, there were changes at boardroom level too. The Chairman left, and the post removed. Reportedly, the idea of ex-players on the board was opposed and blocked by Raul. Josh Kroenke took a more active role. Then, finally, Edu was appointed. A former player, an invincible. What could go wrong? Enter Agent Kia.

A super agent on the club’s side is no bad thing. A super agent inside the club is equivalent to the club getting screwed. Since his arrival, we’ve signed David Luiz at fairly big money and agent fees. We signed an injured Cedric Soares on loan, and then signed him on a 4 year deal. We’re linked with Willan and Coutinho at this moment, and young winger Joelson was also linked. All are Kia’s clients. Emery’s agent also has some influence with Raul it would appear, but this is now Agent Kia’s club. Agent Kia has been giving interviews that sound more like scouting reports on his clients, opining on what ails Arsenal’s operation and predicting what would be done about it.

Since this is the online world and people pretend to be obtuse just to be contrarian, I’ll spell it out. Clubs and agents need each other, but their interests are very much not in alignment. Any time you give an agent a free run at the club, no matter what you get in exchange, you exist merely to serve the agent’s interests.

In the normal course, the recruitment team acts as a bulwark, and provides an alternative. But now that too has been demolished. Among the redundancies is virtually the entire senior scouting department. Francis Cagigao, who was touted as ‘better than Sven’ by Raul’s supporters last year, is now ‘obsolete’. Arsenal scouts across Europe have been put on the exit pile. This follows on from earlier departures of the youth scouting staff. In both cases I see arguments being made as to how useless they were. This is another trend we see at Arsenal since Raul took over. No one just moves on with good wishes having done a good job. Except Emery, the man Raul was most directly responsible for, and the man who even afterwards proved, least deserved it.

Individually, any of these decisions can be justified. As a whole, I only see a club kept in constant chaos. Whenever a sense of direction emerges, there is a spanner thrown into the works. And all of it leads to creating a power structure around a former marketing executive turned Head of Football. Even now there are rumors that Arteta might be overruled on whom to sell, and I wonder how he feels after putting himself front and centre in preaching the idea of a community club to the players.

Football is not just business. It never has been, and the day it becomes that it dies. The clubs know it too. They try to sell us on the Arsenal way of doing things. But what the Arsenal way is, I don’t know any more. I know the club I fell in love with, which was built around a certain culture, I see being willfully and forcefully, destroyed from within. I want Arsenal to compete for and win the biggest prizes in football. But that was not the reason I began to support them. I was proud to have a manager who could confidently and openly state that winning can never be at all costs. Do Arsenal know what they are doing? Is winning, if it even happens, the be all and end all of the sport? There’s a Dennis Bergkamp quote about finding a place where you belong. Everyone makes up their own reasons to support a club. I know mine.